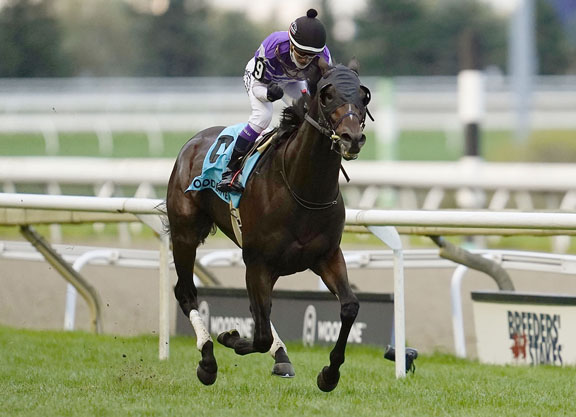 Heading into Saturday's final jewel in Canada's 2020 Triple Crown, trainer Josie Carroll appeared poised to collect the 129th renewal of the Breeders' S. And while most thought that Queen's Plate S. and Prince of Wales S. hero Mighty Heart (Dramedy) was the most likely to accomplish the feat as even-money choice, it was his stablemate Belichick (Lemon Drop Kid) who landed the Canadian Classic in fine style.

Given a 3-1 chance here, Belichick raced two wide in mid-pack as his favored barnmate-prompted by longshot Kunal (Temple City)–blazed through swift early fractions of :23,69, :47.45 and 1:13.02. The field began to converge on the leaders, with Contreras steering Belichick to the outside to take aim at the tiring front-runners. Just before the turn for home, Belichick took command as Mighty Heart began to fade to the inside. Full of run from there, the $300,000 KEESEP buy struck the front in early stretch and charged clear to win by an easy four-length margin over 54-1 longshot Meyer (Singing Saint) and English Conqueror (English Channel) back in third. Mighty Heart tired through the lane, finishing seventh.

“They kind of broke early in the race so I just tried to see them and relax my horse as much as I can,” said winning rider Luis Contreras of the early speed up front. “He was very uncomfortable; this horse has a different style to run, so I just let him be happy wherever he wants to be.”

“Turning for home, I was just in hand all the way to the quarter pole and I asked him to run from the stretch home and he did. I was just watching, just feeling my horse at the same time. And he was doing great the whole way. He came into this race very ready, good thing for Josie and all the crew.”

Third on debut sprinting on the local lawn July 4, the NK Racing and LNJ Foxwoods representative was second next out in a nine-panel maiden special weight on the synthetic here Aug. 1. Most recently, he finished second–beaten 7 1/2 lengths-to Mighty Heart in the Queen's Plate Sept. 12.

“I've said from the very start that Belichick is a very, very special horse that's just coming into his own and I think he showed that today,” said Carroll. “He's a powerful horse. The Queen's Plate was a breakout race for him and we couldn't come back that quickly in the Prince of Wales. A horse needs a little time to regroup from something like that, a young, inexperienced horse. And regroup he did.”

As for the beaten favorite who was looking to become the first Canadian Triple Crown winner since Wando in 2003, Carroll said, “I told him [jockey Daisuke Fukumoto], 'Let's see how this falls out. If you make the lead, watch your fractions..it's a long, long race.' The horse broke well, he found himself up there, unfortunately, another horse dogged him the whole way and he couldn't get the horse to come off the bridle and relax.”

Pedigree Notes:
Belichick, a $300,000 Keeneland September yearling purchase, is a full-brother to the stakes-winning filly Season Ticket and a half to Broken Game (Broken Vow), a listed winner and group placed filly in Peru. Game produced a colt by Distorted Humor in 2019 followed by a full-sister to Belichick earlier this season. The French-bred mare was returned to Flintshire (GB) this year.