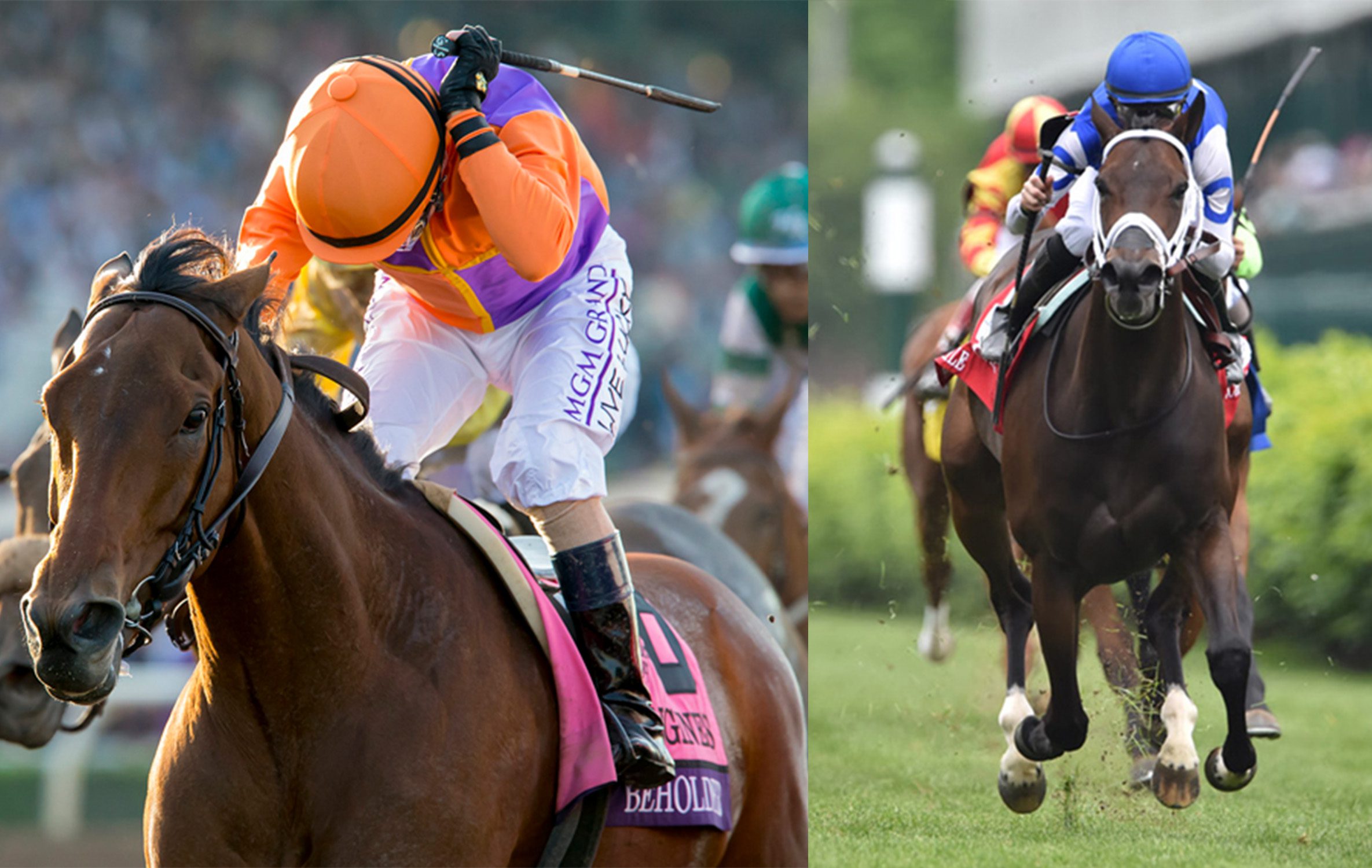 SARATOGA SPRINGS, NY – By far, the most enthusiastic applause during the National Museum of Racing's Hall of Fame induction ceremony Friday morning was for a video clip of race that everyone in the audience likely had seen many times.

Beholder's (Henny Hughes) career-capping victory by a nose over the previously unbeaten champion Songbird (Medaglia d'Oro) in the 2016 GI Breeder's Cup Distaff was nearly as gripping on the big screen at the Fasig-Tipton sales pavilion as it was live at Santa Anita Park. For sheer drama it ranks with the finish of the 1988 Distaff when Personal Ensign (Private Account) rallied to overtake Goodbye Halo (Halo) and GI Kentucky Derby winner Winning Colors (Caro) to complete her career unbeaten.

With a slew of impressive statistics, Beholder and the seven other members of the Class of 2022 joined Personal Ensign in the Hall of Fame, which fittingly is located across Union Ave. from historic Saratoga Race Course. Beholder and Tepin (Bernstein) were elected by Hall of Fame voters in the contemporary division; Hillsdale (Take Away), Royal Heroine (Ire) (Lypheor {GB}) and trainer Oscar White were selected by the Historic Review Committee; three were honored in the Pillar of the Turf category: James Cox Brady, Marshall Cassidy and James Ben Ali Haggin.

This year's event had a smaller crowd than usual, possibly because there were no contemporary trainers or jockeys inducted. All four of the people who received racing's highest honor for their distinguished careers, have been dead for decades. Haggin, a remarkable owner and breeder, who at one time owned 1,500 broodmares, was born 200 years ago.

Beholder, owned by the late B. Wayne Hughes' Spendthrift Farm and trained by Richard Mandella, completed her brilliant career with a record of 18-6-0 from 26 starts and earnings of $6,156,600. She was a four-time champion, won three Breeders' Cup races and a total of 11 Grade I races. She won at least one Grade I in each of her five seasons on the track.

“It's an amazing and humbling honor for us to see our greatest race-mare, our once-in-a-lifetime horse enshrined next to the many others that came before her,” said Eric Gustavson, Hughes's son-in-law and the president of Spendthrift. “Beholder is already in the Hall of Fame now, so what you're getting feels like I'm lobbying for her to get in.”

Gustavson cited some of the high points of Beholder's career and acknowledged by name the people who worked with her, starting with the breeders, Fred and Nancy Mitchell of Clarkland Farm. He said Mandella, who had to miss the ceremony because he had tested positive for Covid-19, deserved credit for Beholder's success, “for his masterful horsemanship, patience and judgment, and managing Beholder's incredible career. Thank you, Richard.”

“I once heard Richard say, 'I can't get out of the horses what God didn't put in,'” Gustavson said. “Well, thank you God for giving Beholder so much talent. And thank you Richard for getting it all out of her.”

As he began to talk about Hughes, who died in August 2021, Gustavson paused for nine seconds to regain his composure.

“You should be standing here right now instead of me,” Gustavson said. “And while we're sorry, he didn't get to see Beholder win her final honor. We take solace in remembering how much Beholder meant to Wayne. You see, Wayne never got too attached to his race horses. They meant a lot to him, but he just wasn't the type to allow his emotions to come along for the ride. Until Beholder that is. She changed him in that regard. Following Beholder's impressive win against the boys in the 2015 [GI] Pacific Classic, Wayne said 'I've had a few good horses in the past, but she's the first horse that makes me feel lucky to be the owner. I've never had that feeling before. I think it's called pride.'”

Owner Robert Masterson saluted Tepin's Hall of Fame induction at the venue where he purchased her for $140,000 just over a decade ago. She emerged as a champion turf horse as a 4-year-old, winning 11 of her last 15 races, including the G1 Queen Anne at Royal Ascot, the second of her three victories over males, and won two division titles.

“The one thing about Tepin that I really admired was the more she raced and the more success she had, the greater the following she seemed to get from the people,” Masterson said. “The fans seemed to start to really love her. The first time I recognized it was when she overcame a 13-length deficit to win a Grade II [Hillsborough S.] at Tampa Bay Downs. When she crossed the finish line, there was just as an eruption of applause. It was like a crescendo at the end of a concert that was so good. And when she won up in Woodbine in Canada when she beat the boys in the Grade I [Woodbine Mile S.], we're having the trophy presentation, and we stopped the trophy presentation to recognize the fans who shouted loudly, 'Tepin. Tepin. Tepin.' It was such an appreciation from the Canadian fans.”

He continued, “Then again when she finished second in the Grade I at Santa Anita at the Breeders Cup [2016 Mile], when she was leaving, to go back to the barn, the grandstand started going, 'Tepin. Tepin. Tepin.' I think that was because she finished the last quarter of that Breeders Cup, the fastest quarter ever recorded on the grass at Santa Anita. And the fans really appreciated that even though she came up half a length short.”

Masterson told a story about seeing a family at Saratoga wearing homemade Tepin shirts and said she had a bar named for her at the track after her score at Royal Ascot.