Home » Archive » Shared News » Le Bernardin Up For The Challenge

Le Bernardin Up For The Challenge 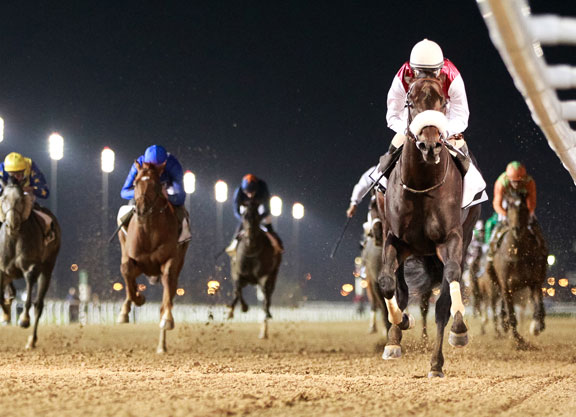 Four weeks ago, Le Bernardin (Bernardini) became the first horse to ever capture back-to-back runnings of the G2 Al Maktoum Challenge R1, and on Thursday the 8-year-old will look for a double in the featured G2 Al Maktoum Challenge R2 over 1 1/2 furlongs further. While campaigned exclusively over a mile last season, Le Bernardin does own a win over 2000 metres of this track at the 2015 carnival, but his greatest challenge could come from his far outside post nine draw. Rider Tadhg O'Shea said, “I would have been a lot happier, especially over the 1900 metres, with a low draw. But that is out of our hands so we will just have to see how things unfold and ride the race as I find it. The horse is in very good form and has won over 2000 metres in lesser company, so Thursday should help us plan the rest of his season depending on how he fares.”

“We are happy with both of them and expect two good efforts,” said Watson. “Storm Belt is obviously proven under these conditions, whereas Second Summer is a nice new horse we have been looking forward to running.”