Last to First Win for Sconsin in the Eight Belles 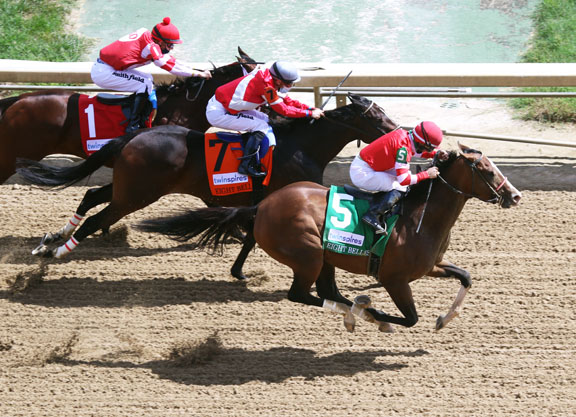 Sconsin had been comfortably beaten by both favorites–Four Graces and Mundaye Call (Into Mischief)–in her previous two outings, but benefitted from a duel between the chalks Friday to earn a breakthrough first graded success while representing the same connections as GI Kentucky Derby longshot Major Fed (Ghostzapper).

Away well enough, the bay dropped back to last of five down the backstretch as Mundaye Call sped off to post fast fractions of :22.11 and :44.14 with Four Graces breathing down her neck. Sconsin popped out for clear sailing as the chalks continued to throw it down into the lane, and rolled past her rivals down the center of the track to win going away.

“She ran huge,” said winning pilot James Graham. “She likes this racetrack evidently. They ran fast in front of her and she picked them off. Can't ask for any more than that. The two favorites are speed horses, so all you can hope is that they hook up and kill each other off. My filly was just happier today. Those two had pace pressure and we just finished them off.”

Breaking through at second asking in a rained-off Fair Grounds sprint in February, the bay was a well-beaten second behind 'TDN Rising Star'-earning Ain't No Elmers (Goldencents) there Mar. 18. Fourth to Four Graces in a very productive track-and-trip optional claimer May 16, she romped by five lengths going a sixteenth shorter here a month later. Sconsin completed the exacta behind Four Graces in the GIII Beaumont S. at Keeneland July 10, and filled out the triple with another run from the back of the pack behind a head-turning performance by Mundaye Call.

“When this race came up on paper we sort of thought the pace scenario could work in our favor,” trainer Greg Foley said. “This filly was very impressive at Keeneland against Four Graces. She got a great ride by James [Graham] and cruised home. It's very exciting winning with a filly like this on such a big stage as Kentucky Oaks [Day]. Hopefully we can do it again tomorrow with Major Fed in the Derby.”

Pedigree Notes:
Sconsin is the 23rd graded/group winner overall for sire Include, and 14th in North America to go with nine in Argentina. She is also the 23rd graded/group winner out of a Tiznow mare. Tiznow is most notably the broodmare sire of Derby favorite and four-time GISW Tiz the Law (Constitution). Sconsin's dam Sconnie was a $90,000 KEESEP yearling buy in 2008, and competed for these same connections. She was second in a local sprint as a July 3-year-old before airing at Hoosier and earning a 93 Beyer Speed Figure. Sconnie made just one more start, and Sconsin was her third foal. She since produced a Paynter filly Mar. 7 and was bred back to Include for 2021. Sconnie is a half-sister to local GSP Sentry (Silver Deputy).