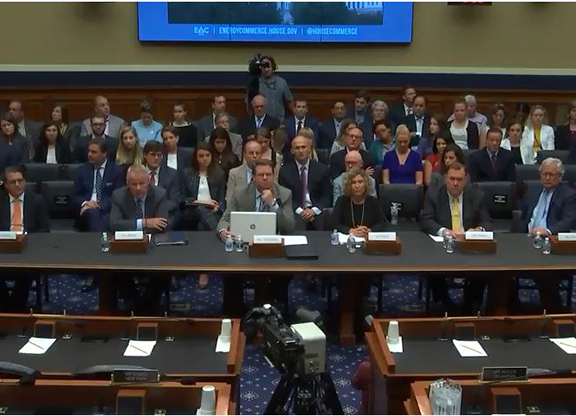 Participants testifying at the congressional hearing

Thoroughbred industry witnesses representing both pro and con sides of a federal bill requiring a uniform anti-doping and medication control program testified before a Congressional subcommittee on Friday, marking the first time that proponents and opponents of HR 2651 have been able to voice arguments while facing questioning from politicians who will decide if the measure advances.

No clear-cut “winner” emerged from the June 22 proceedings before the Digital Commerce and Consumer Protection subcommittee. The most salient points of the two-hour debate came near the end, when questioning drifted away from the cumbersome subplot of Lasix usage and drilled down to the more specific issue of whether Congress needs to step in and impose independent oversight based on the fact that the sport crosses state lines during the course of everyday wagering, breeding, sales and racing commerce.

The issue of Lasix usage percolated to the top of the discussion very soon after the start of the hearing, with supporters of the bill expressing a common desire to end the race-day medicating of Thoroughbreds, while those against it explaining the therapeutic benefits of the anti-bleeding drug. While the Lasix topic is widely regarded as a familiar, hot-button issue to industry insiders, its emphasis might have been lost on some of the legislators who were hearing the term for the first time–and they heard it often over the course of nearly 2 1/2 hours of testimony.

As a result, the 13 politicians who had requested five-minute allotments to verbally grill the witnesses spent a good chunk of that time asking questions like when is Lasix administered, what does it do to a horse's lungs, and do horses feel pain from epistaxis.

At one point, Rep. Tony Cardenas (D-CA), noted that it was an “unfortunate” missed opportunity that no veterinarians had been invited to the panel to more fully explain the role of Lasix in horses.

Foreman though, hammered home a blunt economic point: “If there is a move to eliminate Lasix in racing in the U.S., it's going to force owners out of the business.”

Block and Janney countered with arguments advocating for the discontinuation of race-day Lasix because it creates a negative public-perception problem.

Block said “a needle to the horse's neck [is] not a perception that should be projected.”

But Rep. Adam Kinzinger (R-IL) said “I appreciate that, and I think, 'Yeah, nobody wants to see that.' But if it's a medication that protects horses, then I think in some cases, optics maybe should take a second place to the actual protection of the horses.”

Janney dug in and said the perception issue was global, not just domestic.

“I think one of the things that you have to worry about is the perception of the industry in being out of step with the rest of the world,” Janney said. “We sell our horses in international markets. There's a reason that Keeneland has written a letter supporting this bill. I think that reason is that every other national association talks about why U.S. horses are inferior. Whether that's true or not, I'm not saying. [Another issue is] other international bodies saying 'Why should we accredit your races in the U.S. when you run on race-day medication?'”

Hamelback told the subcommittee he didn't buy that line of reasoning.

“What we do in the United States is the number one [horse racing] industry in the world–period,” Hamelback said. “I think the burden of proof goes to [those supporting HR 2651]. They need to tell us why [federal intervention] is necessary, because statistically it's not, plain and simple. There's no proof of what we are doing currently needs further oversight.”

Foreman re-centered the issue back to domestic economics. He said eliminating Lasix usage would mean that Thoroughbreds sold at auction would have to carry some sort of disclaimer warning buyers that exercise-induced pulmonary hemorrhaging could be a future issue.

“Can you envision buying an automobile or a product where you're told at the time of the sale, 'This product may have a problem. It's likely to have a problem. You're not going to be able to fix it in a way that you can use it,'?” Foreman said. “Are you going to buy that product? That's why you don't see the breeders' organizations throughout the country supporting this bill, because they know what's going to happen. It's going to chill sales.”

Hamelback dovetailed that point by warning that imposing an entirely new regulatory structure upon the sport while cutting back on race-day medication would create unintended long-term economic consequences.

“To me, I see that as a very logistically difficult hurdle to get over,” Hamelback said. “At this point, nothing has been done as far as an economic study to show us what this is going to cost with two new regulatory bureaucratic layers added on to us.”

And with regard to letting the United States Anti-Doping Agency regulate the sport, Hamelback said, the agency's lack of equine expertise would even further harm the industry.

“It is our belief that while they do have that expertise in human [testing], crossing over to the equine world is not only different, it's logistically different. Nothing in this piece of legislation actually puts them doing anything different than we already have in place now.”

Fravel testified that continued exposure to risks from drug cheating would be more damaging than any of the system-change perils cited by the opponents..

“The concern here is we don't have a concerted national effort to identify threats as they occur,” Fravel said. “It's hard for those of us who are honest to come up with devious things that other people come up with, but we need to find a national organization to identify those threats and deal with them.”

Martin said the existing regulatory bodies at the state level are already well equipped and capable of dealing with both known and emerging drug threats.

Rep. Markwayne Mullin (R-OK) was the first politician to attempt to steer the hearing squarely away from the Lasix issue.

“We're talking a lot about Lasix here–I get that,” Mullin said. “But the fact is that Congress does have a role on the commerce side of it when it crosses state lines, even when it comes to sports…. So when we're starting to talk about the bill moving forward, it's not about the industry. The industry can oversee itself…. I am not for over-regulating. I'm just asking the question: Does Congress have a role to play in this or not?”

Mullin continued: “As much as I don't like it, really that's the end or the beginning of our conversation. When it crosses a state line, that is where our role comes into play…. I feel we're a long ways from getting this fixed, but this is a conversation that needs to be had.”

Rep. David McKinley (R-WV) made a point of noting that the witnesses in opposition to the bill brought more verbal fire to their arguments than the supporters did.

“When people come before the panel, sometimes there's a little bit of confusion over whether they're with [or against] any particular bill.” McKinley said. “Not one this one. You two–Hamelback and Martin–I don't know whether you didn't get the memo, but your passion came out pretty strongly about where you stand on this. So I'm fascinated by that, but I want to hear the counter to it as we debate this.”

McKinley then asked Fravel to point out where those in opposition to HR 2651 were wrong in their reasoning.

“The gist of a lot of this [anti-intervention] testimony is things are going fine, we're doing well, don't mess with us; that we don't need a national program, we can do it all ourselves,” Fravel said. But, he added, in terms of bringing about meaningful change, “the current system takes too long. It takes forever.”

Near the end of the hearing, Janney was asked why he didn't have confidence in allowing the feds to just step back and allow the various racing state regulators to come to a consensus on adopting the model rules that already exist.

“I'm 69 years old,” Janney replied. “It's my considered opinion that I would never be around to see that day. It will not happen. I've worked for the last 20 years being involved with other people to try to figure all this out. And the status quo, for a lot of people, is exactly what they want. What I'm here to do is to try to provide the things that are going to be necessary for this industry so that my children can enjoy it.”

The next step in the legislative process will be for the subcommittee to report their findings from this hearing to the full Energy and Commerce committee.

Watch the entire hearing (beginning at 13:50) below.