Lasix Ban in California: How It's Unfolding 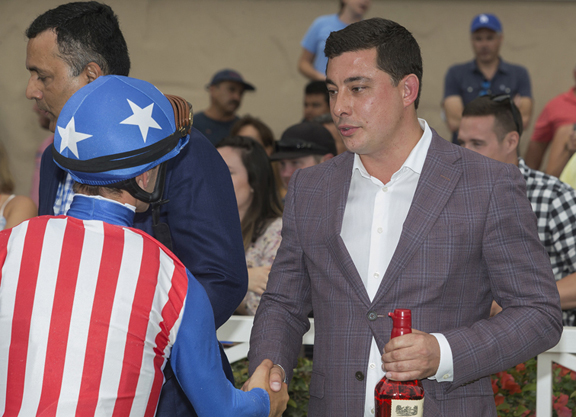 Sunday May 17 at Santa Anita rather disappeared into the ether of a weekend dominated by the resumption of live racing after a COVID-fueled two-month hiatus.

But Sunday May 17 was notable in itself given how it christened the first 2-year-old race in California under the state's new Lasix-free rules.

The chronology of events leading to that watershed is now something approaching lore. During Santa Anita's much-publicized troubles early last year, the track instituted a ban on Lasix, an action the California Horse Racing Board (CHRB) synthesized into a state-wide Lasix prohibition for 2-year-olds on race-day–though not training–beginning with this year's crop.

These events in turn catalyzed a broader movement across the country, spearheaded by the Thoroughbred Safety Coalition, a group of industry organizations and individual tracks, to phase out Lasix.

As for California's first 2-year-old contest, it was won stylishly by Love Wins, a daughter of Haynesfield trained by Luis Mendez. Since then at Santa Anita, there have been another nine juvenile contests run without the anti-bleeding medication.

And so, how have trainers adapted their programs to compensate? What kind of impact has it had on rates of Exercise Induced Pulmonary hemorrhaging (EIPH)? A quick synopsis would go something like this: nothing much to see here—thus far, at least.

“No news is good news”

“I would say that we haven't altered our plan with the babies,” said trainer Doug O'Neill. “The majority of babies, it's not really a concern that they'll have exercise induced pulmonary hemorrhaging.”

Likewise trainer Michael McCarthy. “I have not changed what I'm doing with them in any way whatsoever,” he said.

Without Lasix, trainers have other tools in their toolbox to achieve similar ends on race-day, including “drawing” horses up, the removal of water and feed before a race, sometimes many hours before, to dehydrate.

None of the trainers questioned, however, said their practice of removing hay and water before a race has changed appreciably without use of the race-day medication.

When we spoke, McCarthy had started a lone 2-year-old runner to finish second. He removed the water and feed roughly three hours before the race, just as he does with horses who receive Lasix. “Did not bleed,” he said, of that starter. “Did not have any issues.”

When it comes time to run his first juveniles of the season, trainer Simon Callaghan said he'll probably remove hay and water “a little bit” earlier than usual. But ultimately, he added, “I think it's going to be a learning experience, learning as we go along.”

Not that Lasix should currently cause trainers many sleepless nights. As CHRB equine medical director, Rick Arthur, puts it, “two-year-olds should be horses that really should not be problematic bleeders.” Indeed, chronic EIPH has been found to worsen with repeated exercise and age.

To this point, no 2-year-old starters in California have been formally reported to the CHRB for suffering any degree of bleeding. “No news is good news,” Arthur said.

Ryan Carpenter, a Santa Anita-based private veterinarian, sings a similar tune. “It's happening, we've accepted it, we've embraced it. It's just part of our daily life,” he said, of the ban. “It surprisingly hasn't been discussed, and that's because I don't think it's an issue—at the moment.”

Still, there's one important caveat to note as we gauge the efficacy of the Lasix experiment so far in the Golden State—the giant wrench that the coronavirus has thrown into the industry's engines, meaning many trainers are slightly behind the curve with their juvenile squadrons this year.

“There's numerous factors as to why,” admitted Callaghan, pointing to COVID-triggered disruptions to live racing and the sales programs. Some 2-year-olds have remained on the farm longer than usual, too.

As such, the bulk of his 2-year-olds aren't doing the degree of work ordinarily required of them at this time, he said. “And typically, when we're going easy works with them, we don't give them Lasix anyhow.”

Behind schedule the 2-year-olds may be in California, but over the next few weeks and months, more and more of them will head to the track, the screws of morning training tightening incrementally.

On top of that are other confounders, not least a racing calendar that'll soon weigh heavy with valuable 2-year-old contests. As more 2-year-olds are put through their paces, he wider the net for weaknesses to arise, the respiratory system at the head of the list.

“There's a lot more humidity in the air,” said O'Neill, pointing to Del Mar, and an idea–oft-repeated among California trainers–that the climate at the seaside venue during the hot summer months lends to higher rates of EIPH. “It does make you wonder if it makes horses have a tendency to bleed down there,” O'Neill added.

It should be noted that the scientific literature doesn't appear to support this notion—for example, several experts point to studies from the early 1980s, led by researcher John Pascoe, that found similar rates of EIPH across different locations and climates.

But one inarguable is the intensity of the training environment on Del Mar's narrow track of a morning, even with fewer horses permitted at any one time than there once was—a concern at any busy training facility.

Which leads to another related question: what to do to ease racehorse stress levels? Ellis said that the rigors of morning training were a manageable concern when Lasix was permitted on race-day—without it, however, he's aware that reducing stress through things like altered training patterns and feed programs (supplements especially) will become increasingly important, he said.

Still, when it comes to the races, “there's not a lot we can do in races but cross our fingers,” Ellis added. “I think it's going to be a problem somewhere along the line.”

Having trained in England where race-day Lasix has long-been prohibited, Callaghan admits that, in this regard, he has a bit of a leg-up on his Stateside counterparts. He's already considering longer, slower works to reduce stress on horses prone to bleeding, taking them out when the track's quieter.

Not that he'll stop using Lasix during morning training altogether.

“I'm going to probably breeze a lot of 2-year-olds on Lasix, particularly when they're doing their stronger works,” Callaghan said. “Preventing a horse from bleeding in the mornings is very important.”

Another key issue is air quality–in particular, the ubiquitous problem of dust and spores from bedding and barn floors circulating around the environment where most racehorses spend the bulk of their days.

“Most racehorses, in my experience, have some degree of small airway disease,” said Greg Ferraro, CHRB chair, adding that chronic small airway disease is a “big contributor” to EIPH. “I've always believed that the reason Lasix is so popular is it's a mild bronchial dilator.”

As such, the stabling conditions in California are at the back of many trainers' minds. “It's horrendous–there's a ton of dust,” said Ellis, about the backstretch at Santa Anita lined with low-ceilinged narrow wooden barns with dirt floors. “The air doesn't move around at all. That's no good.”

As is often the case, it might pay to turn to Hong Kong–where Lasix is prohibited in both training and racing–for a glimpse into an alternate way to do things. At Sha Tin, four new state-of-the-art stable blocks with concrete flooring were built for horses competing in the 2008 Beijing Olympics.

“All have air conditioning,” wrote Bill Nader, the Hong Kong Jockey Club executive director of racing, in an email, adding that further modifications are planned at these barns. “Horsemen here are always keen to reduce or eliminate any dust in the stables.”

“The big thing is fear”

Given the phalanx of new rules and regulations adopted over the past 16-months in California, trainers are understandably wary that the Lasix landscape is still a transforming picture.

“I can tell you that the Thoroughbred Safety Coalition's position is this: no Lasix for 2-year-olds. No Lasix for stakes races starting next year,” said Donna Brothers, strategic advisor for the coalition, which comprises The Stronach Group and Del Mar among other groups. “And their position on that is not intended to change.”

In terms of California, the rules as written mean that this year's crop of 2-year-olds will be permitted to use Lasix when they turn three. According to Ferraro, the aim in California is to take steps to prohibit Lasix in stakes races next year, too, as per the coalition's stance.

“We'd go through that year that way and see what happens as to what the next step would be,” he said. As for that next step?

“The ultimate goal is to do away with Lasix altogether, obviously,” he said.

“The big thing you've got to realize about this, the withdrawal of Lasix is probably the biggest fight the industry has,” added Ferraro. “It's hard to find a trainer or veterinarian that's ever trained or practiced without Lasix. So, the big thing is fear.”

For Ellis, the big thing for him as a trainer and businessman is to remain competitive in a jurisdiction with arguably the most prohibitive medication regulations in the country.

Ellis said that he agrees with the vast majority of medication changes that have been instituted in California, but he worries about the impacts from an all-encompassing Lasix prohibition. “If they phase out Lasix,” he said, “it'll phase out racing in California.”