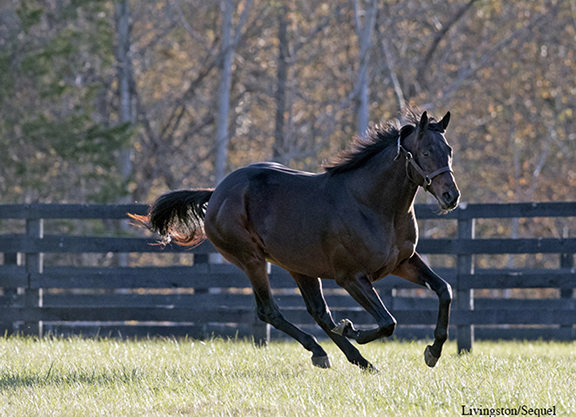 The leading New York freshman sire with debut winners sprinting and routing on dirt and turf, Laoban is represented by the undefeated Simply Ravishing, a dominant 6 1/4-length winner of the GI Darley Alcibiades S. at Keeneland for which she earned an 89 Beyer Speed Figure, the fastest 2-year-old Beyer of Keeneland's fall meet thus far. Prior to that eye-catching score, she strolled home a 6 1/2-length winner of the P.G. Johnson S. at seven furlongs on the dirt at Saratoga which followed a maiden-breaking win at 1 1/16 miles on the turf at Saratoga in her career debut for trainer Ken McPeek. Additional top performers by Laoban include graded stakes-placed runners Keepmeinmind, second in GI Claiborne Breeders' Futurity and Ava's Grace, third in the GII Adirondack S. at Saratoga.

“My phone lit up before [Simply Ravishing] crossed the wire at Keeneland,” said Becky Thomas of Sequel Stallions. “In the following days, we were overwhelmed with calls from all of the very top stallion farms in Kentucky.

“Laoban is stamping his foals and proving to be a cookie-cutter of the Uncle Mo style of stretch and athleticism. Since receiving the foals from New York, they certainly looked the part, but once we started training them at Winding Oaks, I knew that he was going to be something special. Talking with other horsemen in Ocala who were training his first crop of 2-year-olds and seeing them perform consistently, he was the buzz horse all season. Then, for him to become the first New York stallion to sire a Grade I winner in his first crop is absolutely incredible. It is truly a humbling experience to be a part of what is becoming such an important young stallion. WinStar is a great fit for him and he is sure to get a wide variety of nice mares coming from all their partnerships and support. We couldn't be more excited about his future.”

A wire-to-wire winner of the 2016 GII Jim Dandy S. for Southern Equine Stables and Eric Guillot, the dark bay banked $526,250 in his career with additional graded placings in the GIII Gotham S. and GIII Sham S.

An outcross in his first four generations, Laoban, a $260,000 Keeneland September sale yearling bred in Kentucky by Respite Farm, is out of a stakes-placed three-quarter sister to MGISW and multi-millionaire I'm a Chatterbox (Munnings).

“I have tremendous respect for Becky and her Sequel operation,” said Elliott Walden, WinStar's president, CEO, and racing manager. “We are excited to partner with her and the original shareholders and we are appreciative of the efforts of Siena, Taylor Made, and Breeze Easy in bringing Laoban to Kentucky. Laoban is a beautiful son of Uncle Mo who might have three horses in the Breeders' Cup and we believe Uncle Mo is an important sire line for the next generation. Having Laoban join third-leading freshman sire Outwork on our roster gives us two of his exciting three sons with 2-year-olds this year.”