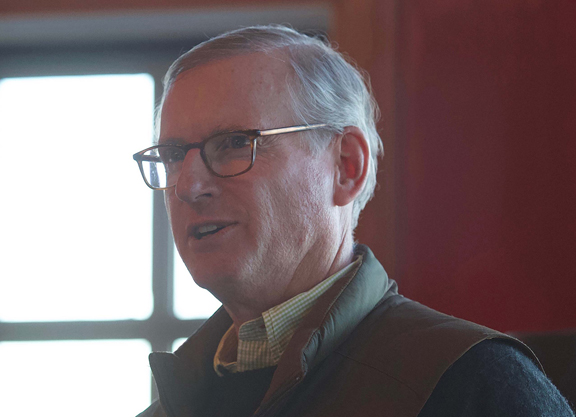 Just days after the arrival of new stallions City of Light (Quality Road) and Accelerate (Lookin At Lucky) after the GI Pegasus World Cup, Lane’s End held a press day Wednesday to allow the media to meet the horses, as well as fellow newcomer West Coast (Flatter), and catch up with the farm’s other stalwarts and its human team. With three new stallions and four sires with their first 2-year-old runners this year, Lane’s End has plenty to be excited about in its 40th year in 2019, and we discussed all these things with Lane’s End’s Bill Farish, Chance Timm and David Ingordo.

When you get these new horses off the track, like City of Light and Accelerate this week and West Coast back in November, what is their routine like and how long does it take them to settle in?

Chance Timm: Each horse is individual but for the most part we just want them to settle down and take a few days and take a deep breath. For now, for both City of Light and Accelerate, their primary routine is just getting a bit of turnout time in a round pen. If the weather would cooperate a bit more we’d graduate them to a small paddock turnout, but the objective is to get them on to the same routine as the other stallions as soon as possible and normally with a horse like West Coast, who got here at a different time of year, within a week or two he is on that kind of routine.

This is a whole new experience for us, with them having just come off the track at Gulfstream a couple days ago. We’re trying to take a step back and just give these horses a chance to chill out and give Billy Sellers–our stallion manager who has been here for 30-plus years–give him a chance to do what he needs to do with them and get them prepared for their job and what they’re here for.

What types of mares could you imagine working with West Coast?

CT: For me from a pedigree angle he’s really interesting. His sire is bred like a lot of the good A.P. Indy sons, A.P. Indy over Mr. Prospector. Inbreeding to Mr. P has been hugely successful with A.P. and his sons and I think that’s going to be a really interesting angle for him. He’s going to have a lot of opportunity that way; he’s out of an Honour and Glory mare so inbreeding to In Reality is also going to be a really good play. Tapit has had a lot of success doing that as well. He’s going to have every opportunity.

Do you see any similarities between West Coast and his sire Flatter, or is he more like his dam’s side?

David Ingordo: A lot of stallions will favour their broodmare sire, and Honour and Glory would throw a very attractive horse. I think this horse has that ‘pretty’ coming through from Honour and Glory. I was pretty keen when we got West Coast because I think Flatter is a very underappreciated stallion and there’s no reason why he can’t be a sire of sires.

Can you reminisce about the day you bought Accelerate as a yearling, and reflect on what he has developed into since then?

DI: John [Sadler] is great. I get him on the phone, I tell him what the plan is and which ones I like and we grade them. On the day of the sale I said man, I’m going to ask him to stretch a bit here, because I wasn’t the only person who liked the horse. He really improved more than I expected because he was such a nice-looking yearling. What he’s turned into today, he doesn’t need to take a back step to anybody; even City of Light, who is as good-looking a horse as you’ll ever find, Accelerate can stand next to him and doesn’t have to be embarrassed.

Accelerate spent about a week at the farm after the Breeders’ Cup, but breeders booking their mares hadn’t had a chance to see City of Light at Lane’s End. How did that affect the process of building his first book?

Bill Farish: We were able to get Accelerate and West Coast here after the Breeders’ Cup so they had that time and a lot of people came out to see them. But with City of Light they didn’t. He obviously had a reputation, he was a $700,000 yearling and people that had seen him or talked to people that had seen him heard glowing reports because he’s just a gorgeous horse. I think in most cases it would have been tough, but his reputation and what he’d done on the racetrack really made it easy. We were completely crushed with requests for him, so it hasn’t hurt him at all having only recently arrived.

Can you talk about the physical similarities between City of Light and his sire, Quality Road?

BF: He might be a slightly more refined version of his father but they do look a lot alike. Mike [Cline] and Allaire [Ryan] were the first ones in our organization to see him and I think that’s what Allaire told me was the first thing that jumped out for her, how much he looked like his father.

Quality Road won three times at Gulfstream and twice he set track records in Grade Is, and I just felt leading up to the Pegasus like City of Light was going to do something similar.

Lane’s End is 40 years in existence this year. There have been many successes to celebrate over that time, but what stands out for you?

BF: A.P. Indy has been the standout franchise player for the farm. His influence on the breed has been amazing. He’d have to be the real standout, but we’ve been fortunate to have sires like Kingmambo, Smart Strike and others that really have made for a great 40 years.

How has the business changed in the time you have been involved?

I think that’s one of the single biggest changes. The stallion market hasn’t changed that much over the years other than the obvious fact that book sizes have increased tremendously; we’ve gone from 50-mare books to where some farms are now breeding over 200 mares.

The fact that so many of your stallions descend from Lane’s End’s foundation sires like A.P. Indy and Smart Strike has to be a big point of pride?

BF: That’s been one of the really gratifying things. Dad has been very successful over the years with sons of A.P. Indy, sons of Smart Strike, and to see now in the case of Quality Road to have City of Light come back to the farm, it’s very exciting, and to have two sons of Candy Ride (Arg) here. There are five descendants of A.P. Indy standing here at Lane’s End.

It could be a very big year for the Lane’s End stallions, as you have four horses with their first 2-year-olds. Can you tell us a bit about each of them?

BF: We are lucky to have four freshman sires this year: Honor Code, Liam’s Map, Tonalist and Mr Speaker. All of them had good-sized books in their first year so there should be lots of 2-year-olds out there running for them.

Honor Code started at a fee of $40,000 and he’s maintained that straight through. His books have averaged about 150 mares. He’s set up to have a big year; he was the second-leading freshman sire to American Pharoah at the sales so we couldn’t be happier with how his first crop was received by the yearling market.

Liam’s Map has had very good books his first three years and it looks like he’s going to have another good book this year. He was the third highest averaging freshman sire last year at the yearling sales and I think we’ll see quite a few of his offspring at the 2-year-old sales. The early reports on the Liam’s Maps have been great.

Tonalist had very strong books his first two years, and in his third year he had more mares than in his second year. We’re very hopeful that the Tonalists are going to surprise us; he’s a little more under the radar than some of these other horses but being a son of Tapit and bred the way he is, he’s really an exciting prospect.

Mr Speaker is bred on the same cross as Tapit and is a great-looking horse. Unfortunately he went down to Chile in his second year and actually got stuck down there, he couldn’t clear quarantine, so he missed his second year at stud here. But he had a very good book of mares his first year. He had a good book his third year so we’re hoping to get him going with his first runners this year. They also sold well at the sales and it wouldn’t surprise me at all if he snuck up and had a very good year.