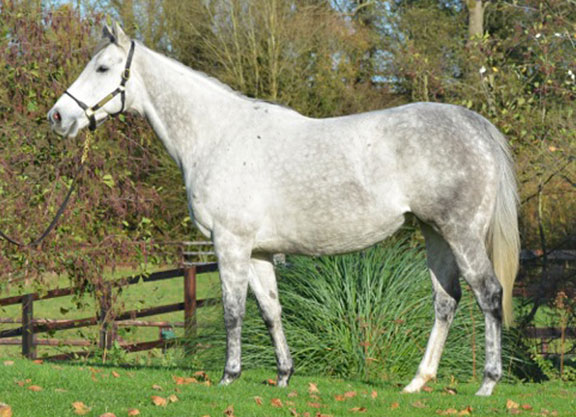 Over the past several years, it has become increasingly rare to find a mare in foal to Galileo (Ire) in the marketplace. Two sold in 2014, one in Europe and one in America, and this year, only one, More Hennessy, who brought $1.5 million from Summer Wind Farm at Fasig Tipton November, has come on the market.

So all eyes will be on Lot 162, L'Amour De Ma Vie (Dansili {GB}–Cuaba, by Smoke Glacken), when she steps into the ring Saturday, Dec. 5 at Arqana, as the sole mare in foal to Galileo to be offered in Europe this year.

The American-bred mare was originally sold as a weanling at Keeneland November as part of the dispersal of her breeder, Palides Investments N.V. She was purchased and successfully campaigned by Herve Barjot's Pegasus Farms Ltd., beating a tough field in the G2 Balanchine S. in Dubai, and finishing second to Integral (GB) (Dalakhani {Ire}) in the G2 Duke of Cambridge S. at Royal Ascot. She is offered here by Coulonces Consignment to dissolve a partnership.

“She was a very good racemare, but she's also a great individual,” said Coulonces' Anna Drion, who has prepared the mare at the family's Haras du Grand-Chene about an hour south of Deauville. “You meet these great mares that are queens, and she's a queen. She's one of those. She's just above it all. She is very, very good-looking, with all the qualities of a great racehorse, and also as a broodmare. She has the most amazing walk, which is so important, and she's got a great temperament.”

“It is very special indeed,” said Arqana's Olivier Delloye. “She is not only a group winner, having defeated some of the best fillies of her generation (Certify, Sky Lantern, Fiesolana and Flotilla) and a good-looking, athletic mare, but she is also the only mare selling in foal to Galileo in Europe. Galileo needs no introduction, of course, and figures speak for themselves: champion sire every year since 2010, 52 Group 1 winners and the highest average prices at yearling sales. This cover will then provide the future foal with the magical cross of Galileo/Danehill.”

Her consignor agreed. “If you look at her pedigree and look at her,” she said, “being by Dansili, Galileo is a quite obvious choice. When you have a group-winning mare by Dansili, the Danehill line, to go to something with Sadler's Wells, you're going to the best of the best with the Danehill/Sadler's Wells cross. I can imagine when they were going to do the mating, it was very simple. These seriously good horses, Frankel, it's this cross. It also makes this offering really unique.”

“It is a great opportunity,” she continued. “To get in to a stallion like Galileo is not that easy. You've got to have a mare that ticks all the right boxes, and it's a big price to pay. She's the only mare in Europe that's going on public auction. You don't know next year, but one imagines it will basically be similar. They're so, so rare on the market. He's sired 52 Group 1 winners, and you've got a seriously good chance of getting a good racehorse.”

Having the opportunity to offer this mare for sale will be extra special for Anna, as L'Amour de Ma Vie was trained by fellow Swede and close friend Pia Brandt. “I'm delighted because Pia is one of my best friends and she came to France about the same time as I did.”

L'Amour de Ma Vie was cross-entered in the Tattersalls December Mare sale, but was withdrawn when the decision was made by the owners to sell her at Arqana instead.

“I think France has proven to be a really, really strong market internationally,” she said. “Arqana has shown that they're capable of bringing the clients to France.”