Laffina the Latest Success for BlackRidge 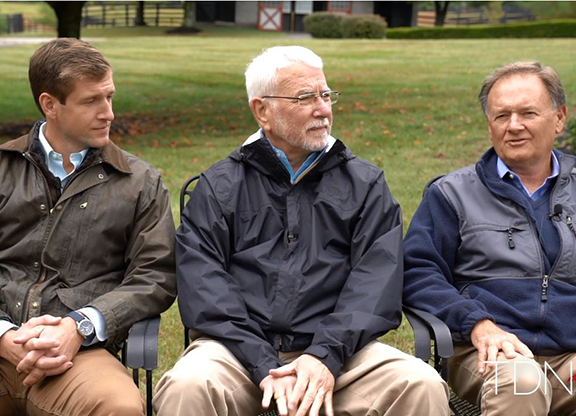 As they have been in the racing and breeding business for only a bit more then three years and are dealing with a limited number of horses, BlackRidge Partners has operated under the radar. Who are they? The short answer is, a group of investors specializing in the oil and gas businesses, who, so far, can't seem to do anything wrong.

Their first-ever racing investment was to buy into California Chrome (Lucky Pulpit) shortly before his win in the 2016 G1 Dubai World Cup. Their second was to snag a piece of Cathryn Sophia (Street Boss) right before her win in the GI Kentucky Oaks in 2016. They bought into two proven horses and did so before their value peaked. But they've also shown a knack for finding talent on their own.

The first broodmare ever purchased by the BlackRidge team is named Laffina (Arch). They bought her privately after she RNA'd for $290,000 at the 2016 Keeneland November sale. Laffina wasn't a notable runner during a brief career in Ireland. But no one is looking at her racing record right now, not after her first foal has turned out to be two-time Grade I winner Bast (Uncle Mo).

Now it is time for BlackRidge to cash in. Laffina will sell at the Fasig-Tipton November sale, where she is among the more attractive mares in the catalogue.

“We can't afford to keep her,” said Bill Daugherty, one of the partners in BlackRidge. “She's become too valuable. She needs now to go to the right farm.”

Daugherty runs BlackRidge along with his son, Will, and their business partner, Bill Barr. For them, racing is a side business. The main business is BlackRidge Resource Partners, an investment firm specializing in the oil and gas industries.

“Coming from the oil and gas business, we're used to analyzing deals,” Daugherty said. “Basically, we use the same philosophies we apply to our main business that we do to the horses. I look at a mare or horse prospect the same way I look at an oil prospect and try to project what the results will be.”

BlackRidge Resource Partners was formed in 2011, five years before the company decided to branch off into racing. For people who live in Lexington and had already enjoyed the sport on a causal basis, racing was a natural path to follow.

“If you live in Lexington, you feel like you're part of the racing industry every day because it's such a big part of the community,” Barr said. “Both Bill and I have been interested in horse racing for years and spent a lot of time going to Keeneland. In 2016, we decided it was a good time and we had a good opportunity to get started in the racing business.”

That was because the BlackRidge group knew the team at Taylor Made and when Taylor Made presented them with the opportunity to become part of the group that was buying into California Chrome in 2016, they accepted. They enjoyed his 2016 racing campaign in which he won not only the Dubai World Cup, but the GI Awesome Again S. and the GI Pacific Classic, important wins that led to a Horse of the Year title and increased his value as a sire.

From the start, BlackRidge has leaned on Taylor Made Senior Account Manager Jeff Hayslett.

“What's cool about Laffina is that BlackRidge is a new entity in the business,” said Taylor Made Vice President Mark Taylor. “Jeff Hayslett is one of the longest-standing employees that Taylor Made has. He's like family. He was the one counseling BlackRidge when they got into the business. He helped them pick out [Laffina], and the rest is history.”

Wanting to support California Chrome as a sire, the BlackRidge partners started shopping the fall mixed sales. The idea was to find mares that would be the building blocks for a broodmare band. Today, they have nine.

“We wanted our broodmare band to start out with a bang,” Barr said.

They had Laffina on a short list of horses they might want to buy, but they thought the asking price at $290,000 was a bit too high. Still, they didn't give up on acquiring her. Daugherty, with the help of Hayslett, kept talking to the consignor, Four Star Sales, and eventually they were able to work out a deal.

“What did we like about her? Everything,” Barr said. “She had the looks. We really liked how she was built. She was by Arch. I really liked her pedigree. We've had three babies out of her and they are all beautiful.”

The long wait to see what Laffina could do as a broodmare ended when Bast, won the GI Del Mar Debutante in her second career start. She followed that up with a win with a win in the GI Chandelier S. Next up is the GI Breeders' Cup Juvenile Fillies, where Bast may be favored.

As much as she has done for BlackRidge, the team is putting business ahead of sentiment. They know that with the emergence of Bast, this is the perfect time to sell Laffina. The idea is to put the profits back into the business and build up their broodmare band.

“We have the nine mares,” Bill Daugherty said. “By selling her, that gives us a greater financial basis to continue growing that band at a greater rate than we had planned on.”

“With Laffina, it's very simple,” said Taylor. “You don't have to do a lot of selling. It's three sentences. By Arch. Only seven years old. First foal is a multiple Grade I winner. Come look at her yourself and you can determine whether you want her or not. I can't imagine any breeder in the world not wanting to add her into their broodmare band.”

Fasig-Tipton President Boyd Browning also believes that Laffina presents a rare opportunity, the type of mare who checks every box.

“Laffina is a very special offering,” he said. “Rarely do you find a 7-year-old mare that's a dam of a multiple Grade I winner in her first foal. She has an exceptional pedigree, and there's depth to her pedigree. She's really accomplished a great deal already with a Grade I winner. And you still have 10, 12, maybe 15 years of production left in the pipeline. It's quite a unique offering and really an amazing opportunity for somebody.”