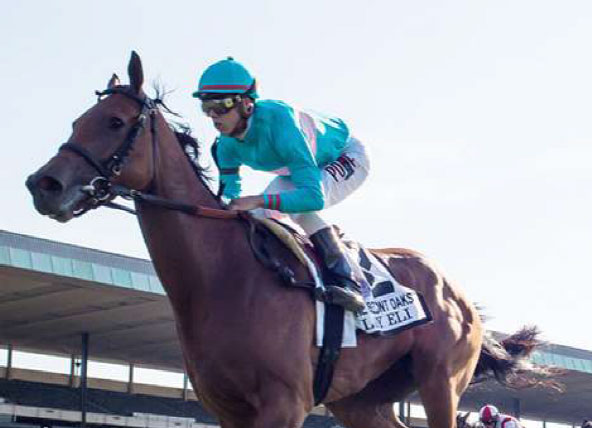 Undefeated Lady Eli (Divine Park), who has not raced since stepping on a nail and developing laminitis in both front feet last July, is back at the Belmont Park barn of trainer Chad Brown and could soon be ready to resume breezing, with a tentative goal of being ready to run later this summer at Saratoga Race Course.

After making remarkable progress in the latter half of 2015, Lady Eli had resumed jogging at Palm Meadows Training Center last December. She advanced to a series of timed workouts in February and March, but disappeared from work tabs over the past eight weeks.

“Chad really got her back into pretty good shape in Florida. She had four very good breezes and we were getting excited, we were hoping she was going to run [this spring],” said Sol Kumin, a principal in the Sheep Pond Partners group that owns the 4-year-old filly. “She shipped to New York, but had a couple of bumps and bruises–nothing major–so Chad is just being super patient and careful with her. He laid off her for three or four weeks, and now she's back and getting pretty close to a breeze. She's galloping every day, and we're hoping she's going to be able to run at the end of the summer.”

Kumin, whose Sheep Pond Partners also owns a 20% stake in Exaggerator (Curlin), the winner of Saturday's GI Preakness S., said no particular race has been picked out for Lady Eli at this juncture.

“Chad's thinking about a few, but we'd love to be able to run at Saratoga at some point if that's possible,” Kumin said. “With her, obviously her safety and being healthy is the most important thing. So I think we're just going to have to read her and see how it goes.

Kumin said a foundation of at least six of seven breezes would be a necessary starting point before considering a race. He said building conditioning, more so than issues with Lady Eli's feet, is the primary factor in her progress right now.

“What happens a lot of times is you go from 'zero to sixty' and you get bumps and bruises along the way,” Kumin said. “If she stays sound, Chad will have enough time and she will run at Saratoga. If the same thing happens like [in March], we get going, we get rocking, we have four or five good breezes, and a couple of things flare up that we don't like, then we'll just keep waiting and be patient with her.”

“And by the way, if it ever happens that she can't run again, she's given us plenty of joy, and we'll be fine with that too,” Kumin said. “We're going to obviously think about her health and safety first.” @thorntontd