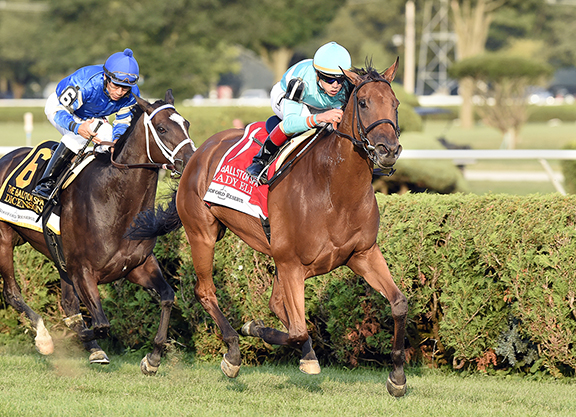 In last year's renewal of the GII Ballston Spa S., Lady Eli was making her long awaited comeback from a life threatening illness and over a year on the sidelines. She finished a heart-breaking second to a longshot that day, but the fans still had eyes and cheers only for her.

This year the fan favorite came into the race fresh off a pair of gritty Grade I tallies and delivered the storybook ending her fans were robbed of last year with another decisive victory. Away well from her rail draw, the chalk set up shop in the two path, running in fourth as GISW Dickinson ticked off early fractions of :24.34 and :48.92. Tucking in to the rail on the backstretch run, Lady Eli was stuck behind a wall of horses coming off the far turn. Swung out three wide by Irad Ortiz, Jr., the bay was lugging in hard, pushing into On Leave (War Front), but was kept to task by Ortiz and charged clear late to make it three in a row.

“She [Lady Eli] is amazing,” winning trainer Chad Brown said. “I'm so glad we decided to bring her here today, for a lot of reasons. We got a good race into her again and most important, all the fans at Saratoga, and beyond got to see her race here one more time; just a great day.”

Brown continued, “I have so much confidence in her. You never really know until they cross the wire, but when she tipped out I know how devastating her turn-of-foot is, and I felt confident she would get it done. She really is a horse of a lifetime. Everything she's overcome; just her natural abilities are remarkable, and she's just a rare, rare horse.”

Lady Eli opened her account with six straight wins between her juvenile and sophomore campaigns, including the GI Breeders' Cup Juvenile Fillies Turf in 2014 and the GI Belmont Oaks in 2015. She stepped on a nail following that Elmont test and contracted laminitis, leading to a 13-month layoff, but clawed her way back to the races here last year.

Run down late by longshot Strike Charmer in this test, Lady Eli proved no worse for wear next out, capturing Belmont's GI Flower Bowl Invitational S. last October and missed by a neck next out in the GI Breeders' Cup F/M Turf in November. A head second to Dickinson in the GI Coolmore Jenny Wiley S. at Keeneland Apr. 15, Lady Eli returned to winning ways in the GI Gamely S. at Santa Anita May 27 and followed suit with a victory in the GI Diana S. here July 22.

A half-sister to this breeder's MGSW Bizzy Caroline (Afleet Alex), Lady Eli is also a half-sister to the unplaced 3-year-old colt Electro (Ghostzapper), a $400,000 Keeneland September yearling acquisition by Juddmonte Farms. Sacre Coeur, a Catesby Clay homebred and winner of a grassy maiden special weight at Aqueduct from three career starts, did not produce foals in either 2015 or 2016, but is represented by a filly from the first crop of Triple Crown winner and Horse of the Year American Pharoah (Pioneerof the Nile). Lady Eli's second dam Kazadancoa (Fr) was purchased by Clay for $30,000 at the 1989 KEEJAN Sale. Her female family includes 1995 GI Kentucky Derby runner-up Tejano Run and the Nureyev sire Alwuhush. Divine Park was exported to Korea and covered 55 mares in his first year at stud in that country in 2016.