Laddie Liam Lights Up the Board in Timonium 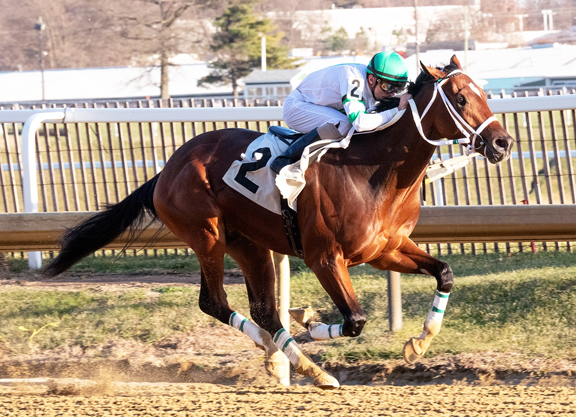 Laddie Liam (Golden Lad) (hip 302), the 4 1/2-length winner of the Maryland Juvenile Futurity S. Saturday, provided the fireworks he was expected to Tuesday in Timonium. Offered as part of the dispersal of owner Joseph Besecker's Thoroughbred stock at Fasig-Tipton's Midlantic December Mixed and Horses of Racing Age Sale, the Northview Stallion Station-consigned colt brought a winning bid of $450,000 from the Green family's DJ Stable LLC. A $14,500 yearling purchase at this same auction 12 months ago, the bay broke his maiden at Laurel second out Sept. 20 for conditioner Hugh McMahon. He was third in the Maryland Million Nursery S. Oct. 19, and added an open first-level allowance going a mile Nov. 14 before running away with the Maryland Juvenile Futurity and earning a career-best 82 Beyer Speed Figure. DJ's Jon Green told the TDN that the colt would be trained by Gary Contessa.

Mine Not Mine (Golden Lad), fourth behind Laddie Liam Saturday, sold a few hips later for $210,000 to Charles Zacney. He was also offered by Northview on behalf of Besecker as hip 310.