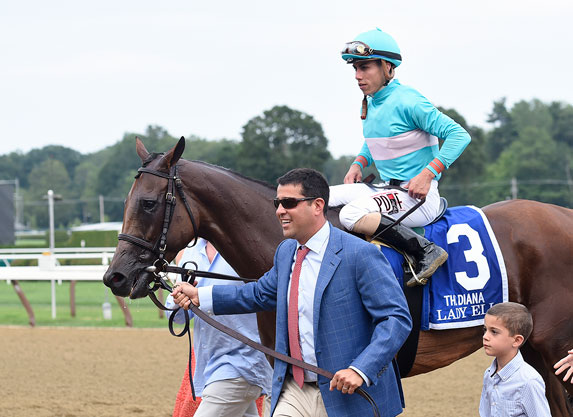 Sol Kumin is a specialist. He prefers to buy into horses that have already raced and shown talent and prefers to focus on quality fillies and mares, particularly ones that run on the grass. It's a program that is working as Kumin has gone from an unknown in the sport to one of the game's most visible and successful owners, doing so in a very short time.

The only problem is that's no way to win a GI Kentucky Derby and what major owner doesn't want to be part of a Kentucky Derby winner? So Kumin, who has approached horse ownership with a pragmatic business plan where the primary goal is to make money, has decided to change things up a bit and buy into the Derby dream. He's been involved with a handful of good 3-year-old colts in the past, but never anything like this. Kumin is set to be the co-owner of three Derby starters, 'TDN Rising Star' Justify (Scat Daddy), Audible (Into Mischief) and My Boy Jack (Creative Cause). He is also the co-owner of GII Remsen S. winner Catholic Boy (More Than Ready), who is no longer on the Derby trail.

“We're trying to do smart things and take care of our money, which we've worked so hard to make,” Kumin said. “But we are also doing this for fun.”

Kumin has never gone into anything he has done in racing without a plan, and his quest to be part of a Derby winner is no different. He is not, and says he never will be, a major player at the yearling or 2-year-old sales, so the only way he is going to have his name etched into Derby history is to buy into a top, established horse. That's what he did in March when he, along with partners, bought a 15% share in both Audible and Justify. Kumin's Monomoy Stables owns 50% of My Boy Jack a horse his team bought for just $20,000 at Keeneland September 2016.

“My view is, instead of buying a bunch of yearlings and 2-year-olds and hoping you wind up with the one that turns out to be really good, why not wait until a little bit later when you have more data and more information and take a shot,” he said.

That theory worked out perfectly in 2016 when a Kumin-led group bought into Exaggerator (Curlin), who would go on to finish second in the Derby and win the GI Preakness S. He didn't fare nearly as well last year when he bought into “a bunch of horses” and more or less came away empty.

“Whether they win the Derby or not, it's fair to say we have already hit with Justify and Audible,” he said. “Since we bought in, they are three for three in terms of wins, with two Grade I wins. The Derby is a big day and I love to have a horse in the race. We had two two years ago (Exaggerator and My Man Sam (Trappe Shot)), none last year, and this year three. This year, we've been super lucky.”

Kumin said he normally prefers to buy more than 15% of a horse but that's all that was offered to him in the case of both Justify and Audible. He declined to go into specifics when asked whether or not the 15% entitled him to share in the stallion rights of the two horses.

Of his three potential Derby starters, My Boy Jack is clearly the third best on paper. But Kumin admits he will be pulling hardest for that one as he has more ties to the winner of the GIII Stonestreet Lexington S. than the other two.

It's not that Kumin won't spend money at a yearling sale. It's just that he is only looking for bargains.

“I have done a lot of work on the data and I think that (buying at the sales) is a pretty tough game,” he said. “I try to know what I know and know what I don't know and I feel that if I went to a sale and spent multiple hundreds of thousands of dollars on multiple horse I am going to lose financially in the long run. I might hit on one every now and then, but in general it is difficult to have that be financially viable over time. Some people are really good at it and I have no edge over them.”

That's why Kumin has relied on Keith Desormeaux, the trainer of My Boy Jack, to buy a few yearlings for him. Desormeaux has an excellent record of purchasing horses for minimal amounts that go on to great success.

“Keith had a great track record, so I let him buy me horses and I split those with one other group,” Kumin said. “But he does have a budget.”

“'Jack is my sentimental favorite for all the reasons I've already discussed,” Kumin said. “A win by him is what would make me happiest.”

Logically, he knows My Boy Jack may be up against it, which could be the case for 18 other Derby starters who will be facing a horse with immense potential in Justify.

“I can come up with a scenario where none of them win and a scenario where any one of the three could win,” he said. “As far as Justify goes, I haven't had a lot of horse with Bob Baffert. I went to the [GI] Santa Anita Derby with my son and spent some time around Bob. I don't know him as well as some other trainers so I don't know how to read his confidence, like I do with a trainer like Chad [Brown]. But Bob sure seems confident in this horse. To listen to him and Mike Smith talk, they really feel this horse is the real deal. So I guess if I had to place a wager it would be on Justify.”

Kumin is also a co-owner of Monomoy Girl (Tapizar), who will be among the favorites for the Kentucky Oaks. None of which means he's going to shift his focus to dirt 3-year-old fillies and colts. It's just that you can only get so much fun out of winning what seems like every turf stakes for fillies and mares run in the U.S. The Derby stands alone, and Kumin, like most, is not immune to its call.