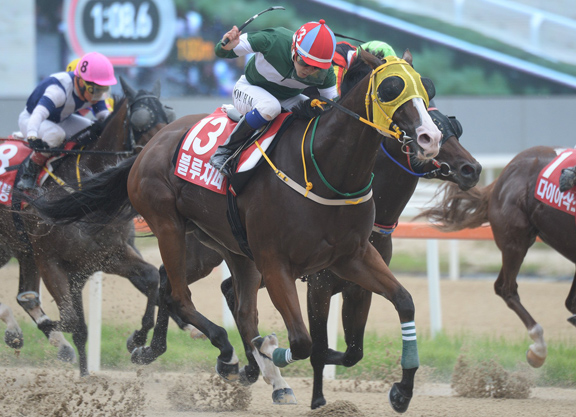 Blue Chipper (Tiznow), who took his career record to seven victories from eight career starts when proving too tough for an international field in the Keeneland Korea Sprint (1200m) at Seoul Racecourse Sept. 9, arrived at that facility from Busan Racecourse in the south to begin the quarantine process in the international isolation stables ahead of his appearance in the GI Breeders’ Cup Dirt Mile Nov. 2 at Santa Anita.

Bred by Gerald Ford’s Kentucky-based Diamond A Racing Corp., the gelded son of 2010 GII Demoiselle S. winner Dixie City (Dixie Union) was bought back on a bid of $95,000 out of the Taylor Made consignment at the 2016 Keeneland September Sale. Exported to Korea, he won two of his three starts at two, but a series of injuries thereafter kept him away from the races for 16 months. He has been an unstoppable force at home since, with five consecutive victories, including a smashing 10-length tally in the Busan Owners’ Cup (1600m) July 28 (video). His final time of 1:36.1 over the deep surface broke the previous track record by better than a full second.

Dropped back in trip for the 1-billion won Keeneland Korea Sprint last time, Blue Chipper showed good speed from gate 13 to dispute the pace and came away late to score by 1 1/4 lengths as the 3-2 favorite (see below).

Blue Chipper will be the first Korean runner at the Breeders’ Cup meeting for the emerging racing nation. Dolkong (Afleet Alex) represented Korea with distinction at the 2019 Dubai World Cup Carnival, winning the Listed Curlin H. ahead of a third-place effort in Round 3 of the G1 Al Maktoum Challenge (2000m).