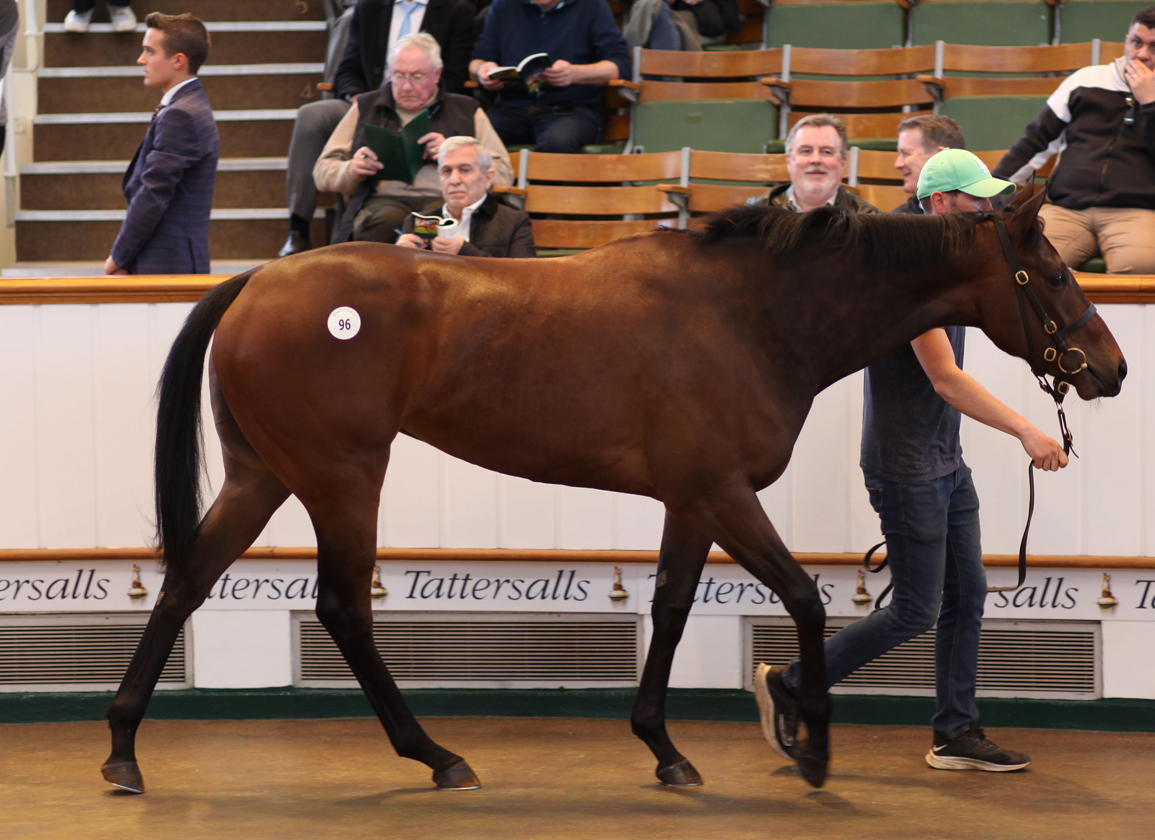 NEWMARKET, UK—The excellence of the Tattersalls marketing team is familiar, but nobody realised they had friends in quite such high places. For the racing gods, as a rule so notoriously uncooperative, have this week followed a script that could scarcely have promoted the Craven Breeze-Up Sale more lavishly—with graduates of last year's auction winning Classic trials, just up the road on the Rowley Mile, shortly before each of its two sessions.

On Wednesday it was the turn of champion juvenile Native Trail (GB) (Oasis Dream {GB}), who extended his unbeaten record barely two hours before the resumption of the auction where he was bought last year for 210,000gns. And the market responded with due fervour.

True, the sale hasn't quite retrieved the peak of the bull run that climaxed in 2017 and 2018, when the average exceeded 140,000gns. But it has emphatically put the travails of the past two years behind it.

A breeze-up catalogue that majors in quality rather than quantity can be rather volatile in the distribution of its fastest times. That was certainly the case last year, when the second session average basically dipped to 70,000gns from 100,000gns on the first day. This time round, a very consistent yield meant that even Tuesday's 22% gains were wildly surpassed, catapulting the session average a staggering 58% to 110,363gns; and the median 50% from 60,00gns to 90,000gns

The one slippage came in unsold lots, up to 31 from 16. But while the wider economic climate does not necessarily feel more secure than over the past two years, and a very different stamp of horse will as usual be offered at Doncaster next week, the sector as a whole can only derive huge encouragement from the business done here.

Tattersalls chairman Edmond Mahony did not neglect his cue. “The fact that this auction has produced the winners of both of this week's principal Classic trials is a powerful endorsement of our premier breeze-up sale,” he said. “And the competition over the past two evenings has reflected the sale's reputation for consistently delivering 2-year-olds of the very highest calibre.

“The array of lucrative Tattersalls bonuses on offer for all Craven Breeze-Up purchases continues to attract owners and trainers in all sectors of the market, and the domestic buyers have faced stiff opposition from a diverse crowd of overseas buyers—all of whom have contributed to gains in the key metrics of average, median and turnover, albeit with a clearance rate which has not matched last year's record level. In addition to the strong overseas contingent, from America, Bahrain, Dubai, France, Italy, Kuwait, Qatar and Saudi Arabia, we have had live internet bidders registered from Hong Kong and Japan and the global profile of the Tattersalls Craven Breeze-Up continues to rise.

“As ever, there have been some outstanding pinhooking triumphs, all of which reflect the professionalism of the consignors whose support of the Craven Breeze-Up is key to its success. As an unbeaten European champion, Native Trail may be a hard act to follow, but we look forward to rewarding even more owners with lucrative £15,000 Craven Breeze-Up Bonuses and hopefully to another winner of either of the substantial Royal Ascot and Group 1 bonuses. In the meantime, there are plenty more quality 2-years-olds on offer at the forthcoming Tattersalls Guineas Breeze-Up and Horses-in-Training Sale, and we look forward to sustaining the momentum.”

Even by their own remarkable standards, Tally-Ho Stud had thrived in Tuesday's opening session and it did not take long to renew that momentum. Having topped the sale with a 525,000gns Kodiac (GB) colt, they moved a daughter of their game-changing stallion onto the silver step of the podium when lot 96 realized 460,000gns.

This filly, a half-sister to dual Italian stakes winner Evil Spell (GB) (Dutch Art {GB}) from the family of the sizzling Mind Games (GB) (Puissance {GB}), was said to have melted the stopwatches in her breeze on Monday and there was corresponding interest from Jake Warren, Richard Brown and David Redvers before they yielded to one of the most committed supporters of the breeze-ups in Michael O'Callaghan.

The Curragh trainer is among Tally-Ho's many satisfied repeat customers, and only last year co-topped the Goffs UK sale at Doncaster when giving £210,000 for their Twilight Son (GB) colt since familiar as Twilight Jet (Ire)—who proceeded to win the G3 Cornwallis S. on the 10th of 11 starts at two. Previous graduates of the farm include the Classic-placed pair Now Or Later (Ire) (Bushranger {GB}), acquired at Doncaster for £45,000, and Blue De Vega (Ger) (Lope De Vega {Ire}), who came through Goresbridge for €75,000.

“I have bought a lot of good horses off Tally-Ho,” said O'Callaghan. “And this is a lovely filly who did a very fast breeze. She's a lovely physical with a great pedigree, so she ticks all the boxes and hopefully she will make up into a Royal Ascot filly.”

She is a sixth recruit for the stable from new client Amo Racing.

@HoStud stalwart Kodiac is having a good #TattsCraven @BrzUps Sale. Lot 96 is a filly who was consigned by Tally-Ho Stud and is from a good blacktype family. @MDOCallaghan and @amoracingltd went to 460,000gns to secure her. pic.twitter.com/Nf28lVWIc1

The early bird might catch the worm but it's a different story as evening draws on and there was fierce competition for only the third lot into the ring, thanks partly to the presence of GII Breeders' Cup Juvenile Turf Sprint winner Twilight Gleaming (Ire) (National Defense {GB}) front and centre on his page.

That filly had already finished second as the favourite for the G2 Queen Mary S., besides winning a listed race at Deauville, by the time her half-brother (lot 84) by rookie Sioux Nation entered the ring at the Orby Sale last year. Somehow he slipped through the cracks, knocked down to JB Bloodstock for just €50,000 but apparently returned to his breeders at Pier House Stud. They tried again with a winter at Mocklershill and, now that Willie Browne had worked his magic, nobody was missing him here. Eventually Anthony Stroud was forced to 380,000gns to see off Richard Brown and, seated with representatives of Najd Stud, Peter Doyle.

Stroud was acting for KHK Racing in Bahrain, who will keep him in England to be trained.

“He looked a real 2-year-old,” Stroud said. “I thought he moved very well in his breeze and he's from a very good consignor. Richard is a very good judge and he was underbidder and, while it sounds a bit repetitive, he ticked all the boxes. Personally, though it's always easy to say, he was the horse we wanted to get to tonight.”

The dam, an unraced daughter of Dansili (GB), was culled by the Royal Studs despite being out of a dual stakes-winning daughter of that treasured G2 Ribblesdale S. winner, Phantom Gold (GB) (Machiavellian). The Morrin family at Pier House will be hoping for further updates for their mare, Twilight Gleaming having set herself up for a return to Royal Ascot when second on her recent reappearance at Keeneland.

?? picking up where we left off at the #TattsCraven @BrzUps Sale. Lot 84 is by first season sire Sioux Nation, @coolmorestud, and is a half-brother to Wesley Ward's Twilight Gleaming. He was consigned by @Mocklershill1 and bought by @StroudColeman for 380,000gns. pic.twitter.com/YlICVpsK3I

Having co-signed for the sale's poster boy Native Trail (GB) as a 67,000gns yearling, Mags O'Toole reiterated her eye for a diamond in the rough when picking up an American Pharoah colt at Keeneland last September for just $57,000—barely half the cover fee.

Brought here by Lynn Lodge Stud as lot 114, he proved in rather greater demand and will now resume his travels after Peter Doyle signed a 260,000gns docket on behalf of Najd Stud.

It turned out that the pinhooking of Native Trail had been instrumental in getting Saud Al Qahtani, seated alongside the agent, onto the plane. “This is a good sale and has produced the 2-year-old champion,” he said. “That encouraged us to come over. This horse will be aimed for the Saudi Derby.”

“That's the hope, anyway!” Doyle said. “He's a lovely horse, and very sound. They were bidding on him for Hong Kong, and he would have had to pass everything for them to be interested. And obviously with the dirt the American-breds do well out there.”

The colt is out of an Oasis Dream (GB) half-sister to the multiple Group 1 winner Twice Over (GB) (Observatory), culled by Juddmonte for 140,000gns at the December Sale here in 2017. She changed hands again at Keeneland last November, for $95,000, and her new owners will doubtless be monitoring this colt's progress with interest.

The Middle East is also the destination, incidentally, for another Keeneland September graduate in the War Front colt offered as lot 125. He made 220,000gns from Satish Seemar, getting a $170,000 play by Grove Stud over the line. She will have residual value, after all, as the daughter of GI Alcibiades S. winner Dancing Rags (Union Rags).

An even giddier pinhook held together when a Kingman colt  (lot 145) bought here in Book 1 for 210,00gns—he's out of group winner Fate (Fr) (Teofilo {Ire}), herself half-sister to that marvellous mare Pride (Fr) (Peintre Celebre)—was cashed out for 300,000gns by Longways Stables to Ross Doyle.

Doyle signed in association with Omni Horse. “It's a new syndicate,” he explained. “Kia [Joorabchian] from Amo Racing is involved, hopefully it will be exciting. I'm not sure of training plans for this horse.”

Longways, incidentally, had earlier achieved a handsome yield on an Adaay colt found in Book 2 for 57,000gns, processed here as lot 103 to Opulence Thoroughbreds for 150,000gns.

And O'Toole and her colleague Norman Williamson meanwhile kept up their momentum—Oak Tree Farm had sold a War Front colt for 425,000gns in the opening session—when Avenue Bloodstock gave 165,000gns for the Camelot colt lot 126 O'Toole had acquired for €80,000 at Arqana last August.

One big personality recognised another when veteran owner-breeder Bill Gredley, looking exceptionally dapper, stretched to 270,000gns for the Zoustar (Aus) filly presented by Gaybrook Lodge Stud as lot 121. He was determined not to yield after missing out minutes earlier on Yeomanstown's 150,000gns Dark Angel (Ire) filly lot 116.

“I liked the grey filly, but was underbidder,” Gredley said. “I like this filly, but so did a lot of people—so she was a lot of money. But if you want something good, you have to pay for it. I don't often buy at the breezes, but we took a look at her and she has a nice personality. I like nice people, and I like personalities! I don't know who will train her yet, I'll have a chat with my son [Tim] who's away show-jumping in Spain.”

Having signed in the name of Stetchworth and Middle Park Studs, Gredley naturally has the option of tapping into this filly's Juddmonte roots. Her dam is an Oasis Dream (GB) half-sister to Monarchs Glen (GB) (Frankel {GB}), that pair in turn out of the G1 Prix de la Foret third Mirabilis (Lear Fan)—whose brilliant half-sister Nebraska Tornado (Storm Cat) won the G1 Prix de Diane in 2003. As such she was well bought here at the Somerville Tattersall Sale here last year, for 70,000gns from Galloway Stud by MC Bloodstock.