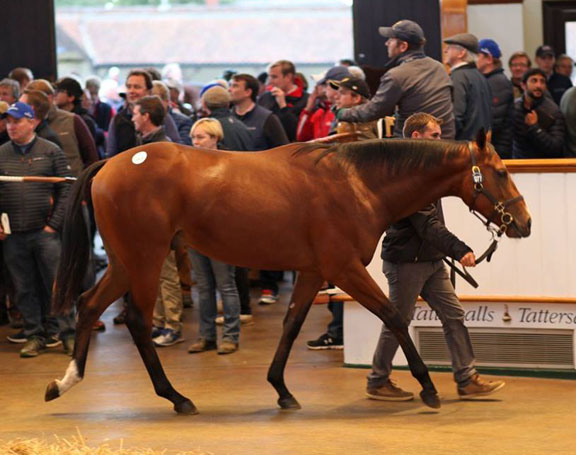 The significant spending of various branches of the Maktoum family has continued to swell the coffers of Tattersalls' October Sale and the various agents and trainers deployed by the sheikhs again dominated the higher level of trade throughout Tuesday's second Book 2 session.

Top of the pops was the sole yearling in the catalogue from Micheal Magill's Bellewstown Stud (lot 977), a half-brother to GI Breeders' Cup Juvenile winner Vale Of York (Ire) (Invincible Spirit {Ire}) by the perennially popular Kodiac (GB). John Ferguson's reserve proved to be deeper than that of trainer Joseph Murphy, who pushed him all the way to the clear top price for Book 2 so far of 380,000gns.

For Magill, who bred the colt and keeps less than a handful of mares at his Navan farm, topping the October Sale was nothing new.

“It's actually the second time we've been on top here,” he confessed. “Back in the '80s we sold an Alzao colt to Henry Cecil and he was one of the first to pass the six-figure mark. This colt is without doubt the best we've had on the farm and I hope he will become the third Group 1 winner we've sold to Godolphin as we also sold them Vale Of York and Classic Cliche, who was a pinhook.”

Magill bought the session-topper's 18-year-old dam Red Vale (Ire) (Halling) as a foal from Shadwell for IR£15,000 and feels this may be her last offspring as she has no foal this year and is not currently in foal.

With almost 29 million gns spent collectively on yearlings last week, Sheikhs Mohammed and Hamdan, their cousin Sheikh Mohammed Obaid, and various Rabbah associates accounted for almost a third of the Book 1 turnover and their contribution to Book 2 will also be sizeable by the close of play today. By the end of Tuesday's session, Shadwell had bought 27 yearlings, Godolphin seven and Rabbah 20.

Following a first-day outlay slightly in excess of 2 million gns for 18 yearlings, the Shadwell team's enthusiasm for October yearlings showed no signs of abating during the second session of Book 2 with horses bought on the day being headed by Kilminfoyle House Stud's son of Kyllachy (GB) (lot 912) at 270,000gns.

A half-brother to the Listed-winning sprinter Aetna (GB) (Indesatchel {Ire}), the February-born colt was bred by Terry Holdcroft's Bearstone Stud, which sold him last December to leading pinhooker Michael Fitzpatrick for 35,000gns. The buzz had obviously filtered around the sales ground as, when the colt entered the ring, the gangway suddenly filled with agents and pinhookers, with the final say being settled between Angus Gold and Ross Doyle.

“Everyone sees it differently but I thought he was the single most athletic individual I've seen this week,” said Gold, who offered that the son of Listed Hilary Needler Trophy winner On The Brink (GB) (Mind Games {GB}) is likely to be trained by Owen Burrows. “The mare has done well with some not-so-fashionable stallions and we're just trying to buy horses who will win races.”

The colt was the star performer on a good day for Kilminfoyle House Stud, which has sold four Book 2 yearlings for an average price of 151,250gns.

Kyllachy was very much in vogue on Tuesday with a full-brother to the durable and talented mud-lover Penitent (GB) (lot 931) being another colt added to Gold's list at 260,000gns after the Shadwell agent saw off a determined Roger Varian. Cheveley Park Stud's dual scorer Pious (GB) (Bishop Of Cashel {GB}) has been a dependable matron, producing ten winners from her 11 runners, including Pentitent's full-brother Supplicant, winner of the G2 Mill Reef S.

Breaking a Maktoum-related stranglehold towards the top of the table was lot 1024, a Sea The Stars colt out of a winning Peintre Celebre half-sister to leading French sire Le Havre (Ire) (Noverre). The Ling Tsui-bred May foal consigned through Mount Coote Stud found favour with Richard Brown of Blandford Bloodstock, who didn't name his client but stated that the colt would be trained in Newmarket by William Haggas.

He said, “Sea The Stars' record speaks for itself and this is a smashing colt, though he is still quite immature due to his foaling date. He still has some developing to do over the next six months.”

Holy Roman Emperor has built a solid reputation in Hong Kong, thanks largely to his Group 1-winning son Designs On Rome (Ire), and another of his colts was bought with Hong Kong as his future target by Alastair Donald for 250,000gns. The agent claimed lot 969 from the Newsells Park draft on behalf of an unnamed Hong Kong-based client and said that he would initially be trained in Lambourn by Charlie Hills.

“We've had a bit of luck with Holy Roman Emperor and this is the nicest I've seen––he was our pick of the expensive horses,” said Donald of the second foal of Raving Monsun (GB) (Monsun {Ger}).

Immediately preceding the Holy Roman Emperor colt was a son of the late Azamour (lot 968), who was one of 11 Book 2 purchases by Roger Varian at 230,000gns.

That return represented a decent result for James Stewart, who bred the half-brother to G3 Geoffrey Freer S. winner Agent Murphy (GB) (Cape Cross {Ire}) at his Wellsummers Stud in Marlborough. Further Group winners to have emerged from the family for Stewart are Hatta Fort (GB) (Cape Cross {Ire}), winner of the G2 Superlative S., and his half-sister Blue Bayou (GB) (Bahamian Bounty {GB}), who also recorded her major victory at Newmarket in the G3 Sweet Solera S.

The leading filly of the day was a classy-looking daughter of Fastnet Rock (Aus) (lot 830) out of a Montjeu (Ire) half-sister to G1 Poule d'Essai des Poulains and GI Keeneland Turf Mile S. winner Landseer (GB) (Danehill). Offered by the Swinburn family's Genesis Green Stud, she was bought by Amanda Skiffington in partnership with Paul Shanahan and M.V. Magnier for 240,000gns.

Consignor Michael Swinburn said of the half-brother to treble winner Viscount Barfield (GB) (Raven's Pass), who was bred by his brother Walter, “She's been a queen from day one. The whole family is so good looking. Walter bought her grandam Sabria and we decided on a Fastnet Rock cover because he is a son of Danehill, he gets as many good fillies as colts, and the cross of Danehill over Sadler's Wells has been so successful.”

One of three yearlings by the subfertile Reckless Abandon in Book 2 hit the leader board when Rabbah Bloodstock stepped up its spending to go to 200,000gns for lot 851, Pier House Stud's colt out of the Danetime (Ire) mare May Day Queen (Ire). A half-brother to Listed Dragon S. runner-up Mukhmal (Ire) (Bahamian Bounty {GB}), the colt's family received a further boost recently with Listed winner Asidious Alexander (Ire) (Windsor Knot {Ire})––a half-sister to May day Queen–– twice being placed in Group 3 company.

The early success for first-crop yearlings of Camelot (Ire), Society Rock (Ire) and Intello (GB) has been chronicled in these pages and it's worth keeping an eye on the progress of Cheveley Park Stud's top sprinter Lethal Force (Ire), who has had 12 Book 2 yearlings sell so far for an average of 62,250gns. Among the buyers are Con Marnane, Roger Varian, Eddie Lynam and Andrew Balding.

One final session of Book 2 takes place today from 10am, with Book 3 set to start tomorrow.