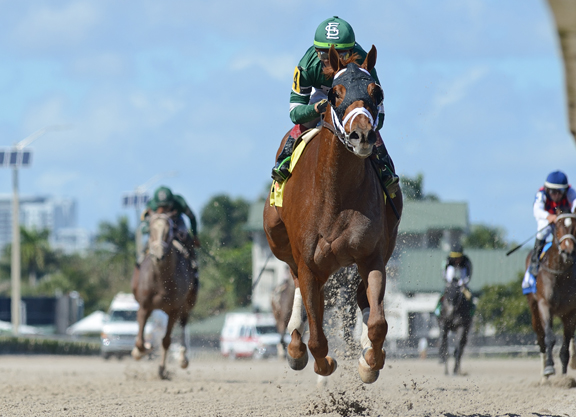 St. Elias Stable's Known Agenda (Curlin) may have earned his way into the GI Curlin Florida Derby field Friday after romping to a 11-length victory in the Gulfstream Park's fourth race, a 1 1/8-mile optional claiming allowance for 3-year-olds.

Known Agenda, who was sent to post as the 1-2 favorite in a field of six, rated off a solid early pace contested by Etched in Stone (Cairo Prince), Top Gun Tommy (Mineshaft) and Warrior in Chief (Kantharos) during a half-mile in :47.89. Top Gun Tommy won the pace battle to take a clear lead into the stretch under Paco Lopez, but Known Agenda loomed large on the turn and quickly took charge at the top of the stretch and drew off under Irad Ortiz Jr. The chestnut covered the Florida Derby distance of 1 1/8 miles in 1:50.47 while equipped with blinkers for the first time.

“Johnny [Velazquez] recommended blinkers last time,” said Pletcher. “We just needed to get him a little more focused. We know he's got a lot of talent. He's shown it in the mornings and hints of it in the afternoon. We're just trying to get him a little more consistent. It looks like today the blinkers helped. He got into the race a little bit more and won impressively in the end.”

The homebred finished fifth in the Feb. 6 GIII Sam F. Davis S. at Tampa Bay Downs following a distant third in the Dec. 5 GII Remsen S. at Aqueduct after getting bumped at the start.