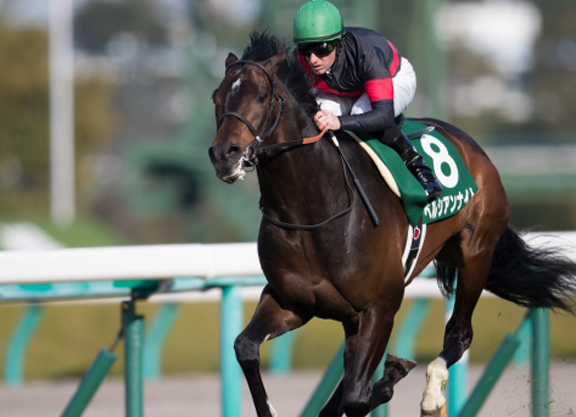 Fourth choice on the board at 7-1, Persian Knight broke widest of all from stall 18 and relaxed beautifully to race with the last quartet, while Maltese Apogee (Jpn) (Goshawk Ken) cut out solid fractions. Making up ground to sit 13th on the final corner, Persian Knight gobbled up ground down the lane while splitting horses, and nipped Air Spinel–who had taken over from the tiring pacemaker 200m out–by a nose. Sungrazer (Jpn) (Deep Impact {Jpn}) was only a half-length behind in third.

“We were a little worried about the farthest draw, but he always breaks well so we weren't that concerned,” said pilot Mirco Demuro. “The colt was responding really well especially around the third corner. Being still a 3-year-old, he seemed a bit nervous entering the lane, but ran really well to the wire. He's a great horse.”

Off the mark in August of his juvenile season at Kokura, Persian Knight was runner-up in Tokyo's Ivy S. last October and returned to winning ways with a victory in Chukyo's Koyamaki Sho on Dec. 11. Only third in the G3 Shinzan Kinen to kick off his sophomore season, the bay won Hanshin's G3 Arlington Cup over a mile on Feb. 25, before placing second in the G1 Satsuki Sho (Japanese 2000 Guineas) in April. He found the 2400 metres of the May 28 G1 Tokyo Yushun (Japanese Derby) a bridge too far and only managed seventh, and was last seen reporting home fifth in the G3 Fuji S. to Air Spinel at Tokyo over heavy ground on Oct. 21.

English highweight Harbinger (GB) (Dansili {GB}), who won the G1 King George VI and Queen Elizabeth S. in 2010, has enjoyed a bit of a purple patch of late, with Persian Knight (Jpn) becoming his third Group 1 winner in the space of five weeks following Deirdre (Jpn) in the G1 Nakayama Shion S. on Oct. 15 and Mozu Katchan (Jpn) who struck only seven days ago in the G1 Kyoto Queen Elizabeth II Cup. The sixth and last reported foal out of the winning Mermaid H. third Orient Charm (Jpn), herself a full-sister to MSW and successful sire Gold Allure (Jpn) (Sunday Silence), SW Nirvana (Jpn) (Sunday Silence) and a half-sister to GSW & G1SP Gorski (Jpn) (Neo Universe {Jpn}), Persian Knight (Jpn) is the fifth winner from six to race and lone black-type winner. Third dam Reluctant Guest (Hostage) scored her biggest win in the GI Beverly Hills H. in 1990 and is a half-sister to GIII Cotillion S. victress Dowery (Full Pocket), who was runner-up in the GI Maskette S. and GI Spinster S. in 1985. Click for the free Equineline.com catalogue-style pedigree.