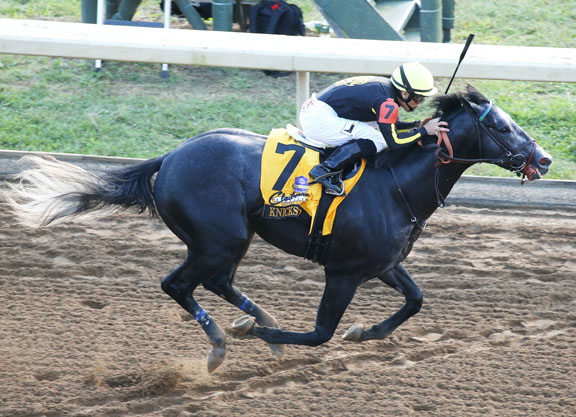 When Knicks Go (Paynter) won the GI Claiborne Breeders' Futurity Saturday at Keneeland, it came as major shock to anyone following the race in the U.S. The 2-year-old was the longest shot on the board at 77-1 and was coming off a distant third-place finish in the Arlington Washington Futurity.

In Korea, they didn't exactly see it that way. The colt is owned by the Korean Racing Authority, which controls racing in that country. Trying to improve breeding and racing and in Korea, they have acquired dozens of stallions from the U.S. and have set up their own stable in America. It consists of 10 horses. Their approach is to be aggressive and never count their horses out, no matter what they might look like on paper.

“We're definitely going to the [GI] Breeders' Cup Juvenile,” winning trainer Ben Colebrook said. “The KRA is pretty aggressive in their placement of horses. If we were first, second or third in this race, they wanted to go to the Breeders' Cup, because it is a big deal for them to have horses participate on the international stage. If a horse has a shot to be in a big race, they want to be in it. They proved to be right Saturday.”

For the KRA, the first step was to go after stallions in the U.S. They weren't looking for superstars, but quality horses that performed well in the biggest U.S. races. The No. 1 stallion in Korea is Menifee, winner of the GI Haskell Invitational and the GI Blue Grass in 1999. Other stallions who have done well in Korea include Take Charge Indy, Hansen and Tiz Wonderful.

Step two was to buy and race in the U.S., with the hope that they could find horses on their own who would go on to become stallions. They've shown no interest in buying expensive horses, but have done well shopping in the middle market. One of their first purchases was J.S. Choice (Congrats), bought for $75,000 at the 2015 Keeneland September Sale. He finished second in the GIII Pilgrim S. and then was unplaced in the GI Breeders' Cup Juvenile Turf. They did even better with Mr. Crow (Tapizar), a $150,000 purchase at the 2016 OBS March 2-Year-Old Sale. He ran second in this year's GI Vosburgh S., beaten 1 1/4 lengths by possible GI Breeders' Cup Sprint favorite Imperial Hint (Imperialism). Knicks Go, an $87,000 2017 Keeneland September purchase, was the first U.S. stakes winner for the KRA.

“Yes, this a major breakthrough for us,” said Jun Park, who represents the KRA in the U.S. and acts as a liaison with Colebrook, who is their only trainer here. “They want to see that this experiment will work. They had some theories, but didn't know how it would work out. They are pleasantly surprised how quickly we have had a big success. We now have a Grade I winner, and have been doing this only three years.”

The KRA is not flying by the seat of its pants when it comes to the U.S. sales. Anything but. Park said the authority has taken a very scientific approach when it comes to its search for horses, one that includes nicking patterns and genetic testing. The name Knicks Go has nothing to do with the New York basketball team. Rather “Knicks” is the name of the nicking program the Koreans use.

“We have our own genetic nicking program,” Park explained. “That's the main reason we are doing this. They have their own genetic program to identify good race horses and also good potential stallion prospects. It's all done with scientific data. With Knicks, we got a hair sample and sent it to a company to analyze the whole genome. They look at the map of the genes and will identify which ones have the highest potential.”

As far at the Breeders' Futurity goes, it's not hard to argue that Knicks Go just got lucky. Jockey Albin Jimenez sensed there was little pace in the race and got to the front and nursed his horse along on the lead through fractions of :47 2/5 and 1:12 3/5. Not only did they not catch him, he pulled away in the stretch for a decisive 5 1/2-length win. Nonetheless, he goes down in the record books as a Grade I winner.

“He was at home running over a track he really loves,” Colebrook said. “He has always trained like a good horse and we hadn't lost any confidence in him. He was untested at two turns, and I thought maybe he would like two turns because of the way he trains. He has a high cruising speed and that is another attribute that serves him well.”

Now that Knicks Go is a Grade I winner, it would seem that he is a perfect candidate to return to Korea some day to stand at stud. But Park said that isn't necessarily the plan. If they continue to develop quality horses in the U.S., the KRA will stand some here and may even open its own farm in Kentucky some day. That way they can have access to better mares and have a better foundation to produce horses that can contribute to the quality of racing in Korea.

“As you know, they have brought many stallions into Korea from the U.S.,” Park said. “They like to experiment, to identify potential stallion prospects. That's why they started buying at the U.S. sales. They won't necessarily go to Korea. If they have a good race record, have a Grade I win, and if there is some demand in the United States, they plan to stand stallions in the U.S.”