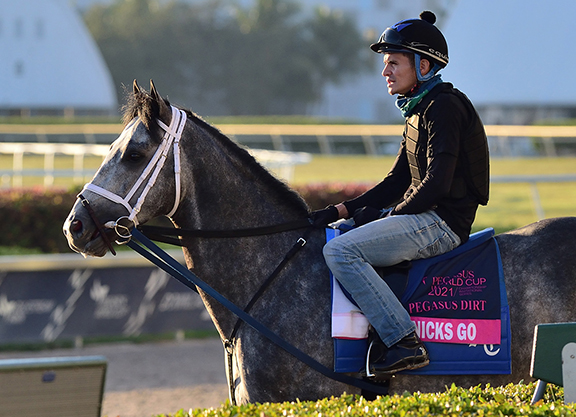 Knicks Go (Paynter) rides a red-hot streak, including a career high in the Breeders' Cup, into Saturday's $3-million GI Pegasus World Cup Invitational S. at Gulfstream, in which he was installed as the morning-line favorite. An upset winner of the GI Breeders' Futurity S. back in 2018, the gray was transferred from trainer Ben Colebrook to Brad Cox at the end of a disappointing 2019 season. Romping by 7 1/2 lengths in his debut for Cox in an Oaklawn optional claimer Feb. 22, the Korea Racing Authority colorbearer was sidelined with a knee chip following that effort and underwent surgery. Knicks Go returned to the track better than ever, demolishing a Keeneland optional claimer by 10 1/4 lengths Oct. 4, earning a 107 Beyer Speed Figure, and followed suit with a decisive score in the GI Breeders' Cup Dirt Mile Nov. 7, for which he registered a 108 Beyer.

“I'm a big believer that speed is good at a mile and an eighth and beyond–obviously it depends on how much other speed is in the race,” said trainer Brad Cox. “But I think he can get it. I think he's a horse that once he gets free and loose, he runs with a lot of confidence. I'm excited. I really do think he'll handle a mile and an eighth. In his three races with us last year, there was horse left. In the Breeders' Cup, Joel [Rosario] reached up and grabbed him four or five jumps from the wire, so he was still going.”

Code of Honor (Noble Mission {GB}) looks to return to winning ways in this event after several on-the-board efforts. Victor of the 2019 GI Runhappy Travers S., the WS Farish homebred kicked off 2020 with a victory in the GIII Westchester S. June 6 and rallied for third next out in the GI Runhappy Metropolitan H. July 4. Fourth in the GI Whitney S. Aug. 1, the chestnut checked in second in the Oct. 3 GII Kelso H. at Belmont and the Nov. 27 GI Clark S. last time at Churchill Downs.

Tax (Arch) will try to make amends for a sub-par effort in last year's Pegasus. Capturing the 2019 GII Jim Dandy S., he was benched after a seventh in Code of Honor's Travers. Returning with a second behind that rival's barnmate Performer (Speightstown) in the GIII Discovery S. at the end of 2019, the gelding failed to fire in last term's Pegasus, finishing a non-factor ninth. Fifth when next seen in the May 2 GII Oaklawn H., the dark bay hit the sidelines again and returned with a dominant victory in this venue's GIII Harlan's Holiday S. Dec. 12.

“He's better now than he's ever been,” said trainer Danny Gargan. “We always knew he was a really good horse. He's grown and developed into a better horse than he was last year. I think with age he's getting better and getting stronger, healthier. He has a few little issues we had to work through, and he's gotten through them. I'm expecting a big performance.”