Kitten's Joy's Colt Gets His Grade I in Sword Dancer 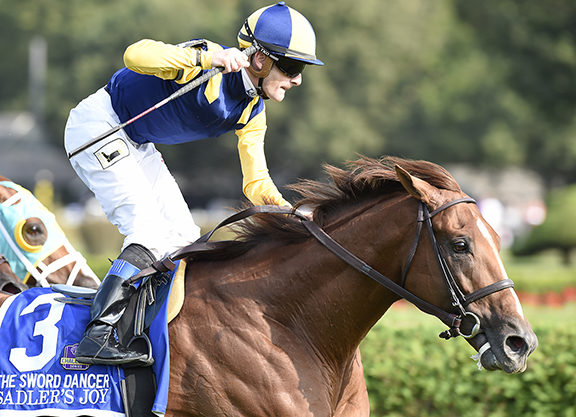 Sadler's Joy had been knocking at the door of a Grade I win all year and finally broke through Saturday with a last-to-first success. A step slow from the stalls, the chestnut trailed the field early as Frank Conversation (Quality Road) put up early fractions of :24.42, :49.17 and 1:14.19. Swung out four wide at the top of the lane, the homebred came rocketing up the outside and surged past the closing duo of Money Multiplier and Bigger Picture in the final sixteenth to score.

“At the beginning, he kind of propped leaving there and Julien said he didn't know what happened,” said winning trainer Tom Albertrani, who was scoring his first win of the meet in the Sword Dancer. “He kind of just stalled on the break and then when he got going he felt really happy with the place he was in and felt that the pace was honest and he didn't panic and just waited for the right moment to push the button.”

As for his next start, Albertrani said, “”Most likely the [GI Joe Hirsch] Turf Classic at Belmont Park [Sept. 30].

Sadler's Joy won three in a row at the end of last year and kicked off 2017 with a runner-up effort in the GIII William L. McKnight H. in January. A narrow victor of the GII Pan American S. next out there Apr. 1, the chestnut was third in both the GI Man O' War S. May 13, the GI Manhattan S. June 10 and the GII Bowling Green S. July 29.

Sadler's Joy is a grandson of Binya, a stakes winner and group-placed runner in France who annexed the 2004 GIII The Very One S. here for Joe Allen and Kiaran McLaughlin. Dam Dynaire was a $360,000 KEESEP yearling, but failed to make it to the races. Dynaire's 3-year-old colt Lunaire (Malibu Moon) broke his maiden when trying turf for the first time at Tampa Feb. 17. She has a 2-year-old colt named Dyna Buck (Lemon Drop Kid) and a yearling filly named Dyna Passer (Lemon Drop Kid). She did not produce a foal this year, but was bred back to Ghostzapper. Rene and Lauren Woolcott's Woodslane Farm also bred Classic winner Tonalist (Tapit).