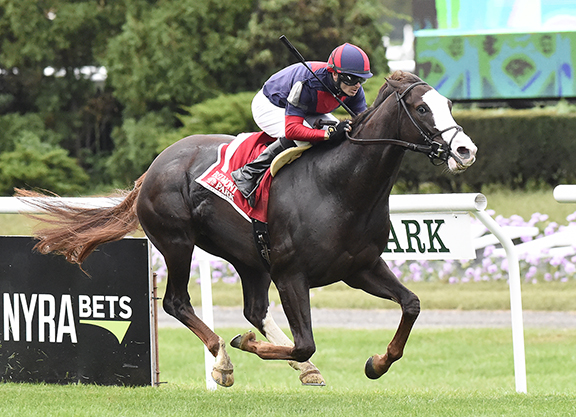 Have At It | Sarah K. Andrew

R. S. Evans homebred Have At It got up late to spring a mild upset in Belmont’s GII Hill Prince S. Saturday. Pressing from second as Sand Dancer clocked an opening quarter in :24.94, the 11-1 shot was joined by Golden Brown (Offlee Wild) and the pair raced in tandem as Sand Dancer shot clear by several lengths after a half in :49.57. Closing in on that pacesetter in the lane, Have At It slipped past on the inside late and kicked clear to win by a length. Heavily favored MGSW Raging Bull (Fr) (Dark Angel {Ire}) failed to fire, finishing a non-factor fifth.

“He’s always been a nice horse,” said winning trainer Christophe Clement. “It took us a while to figure him out. Every time he’s been ridden forwardly this year, he’s run very well. Every time he’s been taken back he’s run disappointingly. His race in Saratoga [Better Talk Now] was a good race. He probably should have won with a better trip. His allowance race here as well [July 5] was a very good race as well and today he ran great.”

He continued, “I was a little bit worried on the turn that the horse on the lead got loose and we couldn’t catch him, but he really quickened and got there so it’s a lot of fun. This is a great win, a Grade II with some of the best turf 3-year-olds here in New York. He belongs in that league as he proved today. I’ll have to talk to Mr. Evans about the next step, but as for now we’ll hope he comes out of it well and keep all options open.”

Graduating at third asking at Keeneland last October, Have At It was off the board next out behind Raging Bull (Fr) in a Belmont optional claimer in his belated seasonal bow June 8. Winning a nine-panel test in Elmont next out July 5, he was sixth to Raging Bull over a yielding course in Saratoga’s GII Hall of Fame S. Aug. 3 and was a neck second last time in the Spa’s restricted Better Talk Now S. Aug. 27.

Have At It is the 41st graded winner and 89th black-type winner for his sire Kitten’s Joy. The winner’s first two dams, Akronism and Jerry Bomb, were also Robert S. Evans homebreds. His dam Akronism, a two-time Grade III winner at Woodbine, produced Akron Moon (Malibu Moon), the stakes-placed dam of MGISW Bellafina (Quality Road) and MSW & MGSP Diamond King (Quality Road). She is also responsible for the unraced juvenile filly Mrs. Got Rocks (Lemon Drop Kid) and a yearling colt by Evans’s GI Belmont S. victor Tonalist. She failed to get in foal to Tonalist for 2018, but was bred back to that Lane’s End sire again this year. The winner also hails from the family of champion grass horse Johnny D. (Stage Door Johnny) and GISW millionaire Urgent Request (Ire) (Rainbow Quest).