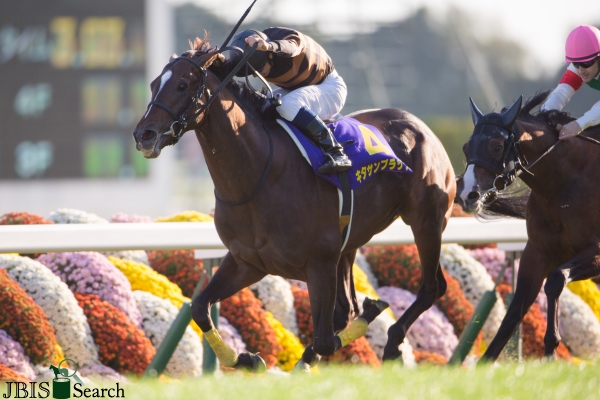 BLACK GETS THE GOLD IN JAPAN CUP

Kitasan Black (Jpn) (Black Tide {Jpn}) has been off the board just once in 13 outings, and the 4-year-old proved to be as brilliant as he is reliable on Sunday when wiring the G1 Japan Cup as the favourite. Bouncing out of the innermost stall, Kitasan Black and Yutaka Take led the 17-horse field into the first turn with One and Only (Jpn) (Heart's Cry {Jpn}) and Real Steel (Jpn) (Deep Impact {Jpn}) keeping close order. The bay gradually increased his advantage to about four lengths down the backstretch, but that lead was whittled down to a length by the time he swung into the straight. Kitasan Black was still moving visually best, however, and he needed just a few left-handed reminders to hold his rivals at bay, winning by a relatively cozy 2 1/2 lengths from Sounds Of Earth (Jpn) (Neo Universe {Jpn}), who closed from the back of the pack, and Cheval Grand (Jpn) (Heart's Cry {Jpn}).

today. I am also happy to have proved he is capable over 2400 metres at Tokyo Racecourse, where he experienced his only big defeat.”

Shimizu added, “I let Take make his decision as far as racing tactics and, watching the colt racing comfortably in front, I knew that he had plenty left in the tank coming into the stretch

so I was saying to myself “he's OK, he's OK”–but in fact I don't even remember the words I was yelling as the finish line drew near.”

Shimizu indicated Kitasan Black would stay in training next year. “As far as I know, there have been no talks about retiring the colt, so I assume he will stay in training next season,” he said. “Overseas challenges such as the Dubai Sheema Classic and the Prix de l'Arc de Triomphe are certainly of great interest, although this also will have to be discussed.”

The overseas challengers–German raiders Iquitos (Ger) (Adlerflug {Ger}) and Nightflower (Ire) (Dylan Thomas {Ire}) and France's Erupt (Ire) (Dubawi {Ire})–were shut out, with Iquitos finishing best of all in seventh after getting as close as second in the lane. Trainer Hans-Jurgen Groschel said, “We're happy with how he ran today. It was a bit unfortunate that he had to break from an inner stall–he was trapped inside horses and wasn't able to accelerate as hoped. It would be nice if we could come back to Japan again.”

Nightflower showed little after traveling in rear throughout.

“She was not herself today,” said trainer Peter Schiergen. “She wasn't able to get into a good position, running in the rear, and was totally unfocused. She will retire when she gets back home as planned.”

Erupt had no immediate excuses for his 14th-place finish after getting a clean trip traveling in fourth early.

“We were able to sit in fourth to fifth and be in good striking position, but he just couldn't respond in the stretch,” said jockey Pierre-Charles Boudot.

Kitasan Black is a son of Black Tide (Jpn) (Sunday Silence), a full-brother to the great Deep Impact (Jpn) who failed to win in eight starts. He is the third foal out of the unraced Sugar Heart, whose preceding foal was the G2 American Jockey Club S.-third Shonan Bach. Kitasan Black's second dam, Otome Gokoro (Jpn) (Judge Angelucci), is a half-sister to the Grade I-placed Cee's Tizzy (Relaunch), best known as the sire of U.S. Horse of the Year and dual GI Breeders' Cup Classic winner Tiznow.