Kitasan Black Repeats as Japanese Horse of the Year 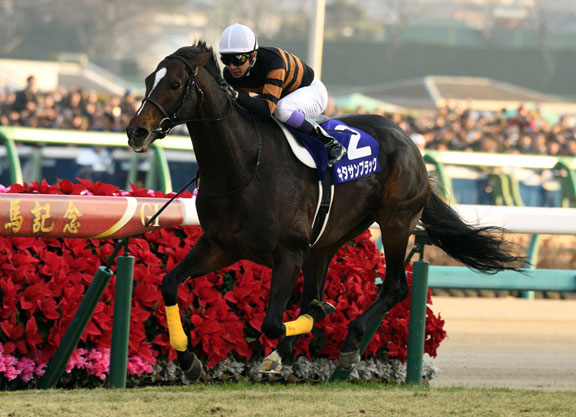 Kitasan Black (Jpn) (Black Tide {Jpn}) earned 287 of a possible 290 votes and was named Japanese Horse of the Year for the second straight season, it was announced Tuesday. He becomes just the seventh two-time winner of the island nation's top accolade, joining the likes of Deep Impact (Jpn) (2005-2006) and Vodka (Jpn) (2008-2009).

The 2016 G1 Japan Cup winner, Kitasan Black employed off-pace tactics en route to winning the upgraded G1 Osaka Hai (2000mT, video), then successfully defended his title in the G1 Tenno Sho (Spring) (3200mT, video) at Kyoto in track-record time four weeks later. Victorious in a heavy-turf renewal of the G1 Tenno Sho (Autumn) (2000mT, video) when racing first-up for four months in late October, the bay was a gallant third when in search of back-to-back wins in the Japan Cup and signed off with a wildly popular score in the G1 Arima Kinen (2500mT, video) Dec. 24.

Bred by Yanagawa Bokujo, Kitasan Black raced in the colors of the Ono Shoji and concluded his career with 12 wins from 20 starts and earnings approaching ¥1.9 billion (about US$16.6 million).

Vivlos (Jpn) (Deep Impact {Jpn}) was on the board in just one of her three starts in Japan in 2017, but her lone victory of the season in the G1 Dubai Turf (video) in March was good enough to land her championship honours as best older mare in Japan. The bay filly, a daughter of Halwa Sweet (Jpn) (Machiavellian), is a half-sister to Cheval Grand (Jpn) (Heart's Cry {Jpn}), who defeated the Horse of the Year elect in the Japan Cup.

Rey de Oro (Jpn) (King Kamehameha {Jpn}) ran on to split the top two in the Tokyo feature, and that performance on top of his brilliant victory in the G1 Tokyo Yushun (Japanese Derby) (2400mT) (video) in May, secured him the champion 3-year-old male award. He also added a defeat of subsequent G1 Kikuka Sho hero Kiseki (Jpn) (Rulership {Jpn}) in the G2 Kobe Shimbun Hai (2400mT) in September.

One week prior to Rey de Oro's victory in the Derby, Soul Stirring (Jpn) (Frankel {GB}) took out the G1 Yushun Himba (Japanese Oaks) (2400mT) (video) and was rewarded for that effort by being named best 3-year-old filly. She became her successful sire's first champion when landing 2-year-old filly honours in 2016.

Danon Premium (Jpn) (Deep Impact {Jpn}) gave his sire a second 2017 champion and 27th overall with a perfect three-from-three campaign that ended with a smooth success in the G1 Asahi Hai Futurity Dec. 17 (video). Orfevre (Jpn) (Stay Gold {Jpn}), the 2011 Japanese Horse of the Year, was represented by his first crop of runners in 2017 and his daughter Lucky Lilac (Jpn) out of US Grade I winner Lilacs and Lace (Flower Alley) gave the stallion his first champion by virtue of her season-ending win in the G1 Hanshin Juvenile Fillies (video).