Kings Will Dream Remains Perfect Down Under 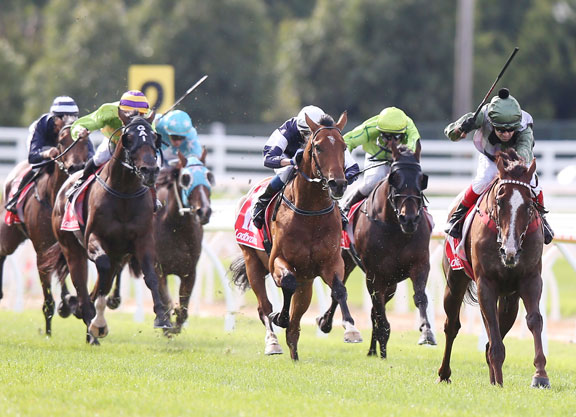 Kings Will Dream (Ire) (Casamento {Ire}) ran his Australian record to a perfect five-from-five with a dominating five-length success in Saturday's A$300,000 Listed Mornington Cup (2400mT) in Victoria, earning a ballot exemption for the G1 Caulfield Cup later in the year in the process.

Favoured at $2.10 (11-10) for this black-type debut, the 4-year-old landed just ahead of midfield in the three-out, three-back spot with cover for the opening mile of the 12-furlong test. Held together by Dean Yendall down the side of the track, Kings Will Dream was steered out into the three path leaving the 400-metre point and raced away in the final eighth of a mile despite failing to switch his legs (video).

A €50,000 Goffs Orby yearling purchase, Kings Will Dream was sold for 7,500gns as an unraced 2-year-old at Tattersalls' October Horses-In-Training Sale in 2016 and proceeded to break his maiden in three runs for trainer Mickey Hammond. He won benchmark races at Warrnambool and Ballarat in his first two tries in Australia before adding a pair of six-figure handicaps at Flemington in his two most recent trips to the post.

“When we went to the benchmark we didn't think we were going to win the Mornington Cup,” Weir told Racing.com. “I was thinking more like a (benchmark) 70. He's had a great preparation and he was strong to the line over the 2400 metres which is great to see. You could (keep racing him) but it's job done now. He deserved his rest now and it's all about the Caulfield Cup.”