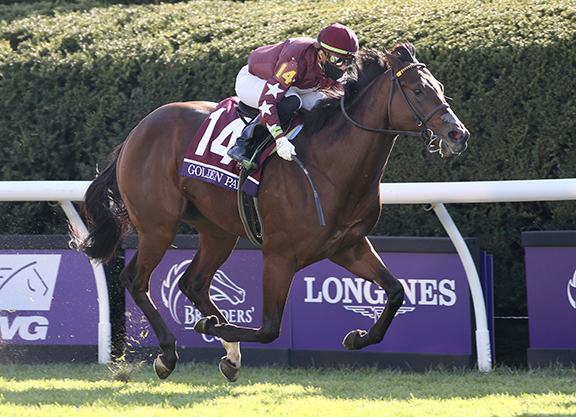 Breeders' Cup hero Golden Pal (Uncle Mo) is targetting the G1 King's Stand S. as his long term goal. Second on debut, the Ranlo Investments colourbearer filled that position again in the G2 Norfolk S. at this year's Royal Meeting before returning Stateside to take the Skidmore S. at Saratoga in September. Brought back to Keeneland for the Breeders' Cup, he turned in a solid effort to win the G2 BC Juvenile Turf Sprint on Nov. 6.

Another likely Royal Ascot contender is Stonestreet Stables' G1SW Campanelle (Ire) (Kodiac {GB}). Successful at first asking at Gulfstream Park in Florida, she saluted in the G2 Queen Mary S. at Royal Ascot in June before winning the G1 Darley Prix Morny by two lengths. Her last race was a fourth in the GI Breeders' Cup Juvenile Fillies Turf at Keeneland on Nov. 6 racing beyond six furlongs for the first time. She will point to the G1 Commonwealth Cup, also at Royal Ascot.

“We're really excited about bringing Golden Pal back to Royal Ascot,” said Ward. “It was a great day at Keeneland and we're really looking forward to 2021. We're working from the King's Stand backwards. I think we'll go for the Commonwealth Cup with Campanelle and let the colt run against the older horses in the five-furlong race.”

On the G2 Queen Mary S. heroine he added, “I think it was maybe the end of the long season for her. We got her back home early after Deauville and prepared for the race, but there was a lot of training involved.

“I don't want to take anything away from the winner, because she ran great. We're already looking forward to Royal Ascot next year with Campanelle, too.”