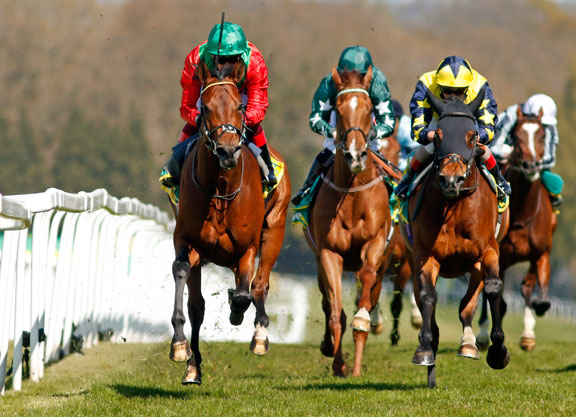 Waldkonig holds off Desert Encounter in the Gordon Richards | racingfotos.com

It has taken longer than initially expected, but Waldkonig (GB) (Kingman {GB}) finally got his Pattern-race win at the right end of his 4-year-old campaign in Friday's G3 Gordon Richards S. at Sandown. Labelled a TDN Rising Star at two, Gestut Ammerland and Newsells Park Stud's half-brother to Waldgeist (GB) (Galileo {Ire}) was winning for the first time subsequently in a handicap over this 10-furlong trip at Pontefract Apr. 6 and it was significant that he attracted support into 6-4 favouritism despite this looking competitive. Ridden up with the pace from the outset before getting a lead from Extra Elusive (GB) (Mastercraftsman {Ire}), the bay was sent past that rival by Frankie Dettori with two furlongs remaining and was always doing enough to hold the veteran Desert Encounter (Ire) (Halling) by 1 1/4 lengths, with Extra Elusive 2 1/2 lengths away in third. “We thought he was going to be our Derby horse last year, but he grew and got weak and John was brilliant to give him time to develop,” Dettori explained. “It was the first time I have ridden him since last year and he has come on a lot physically. He gave me a real good feel there and is a good horse in the making. His pedigree suggests a mile and a half is not beyond his reach and he is very easy to handle, so I don't see why he couldn't go up in trip. He has fresh legs and I'm sure he will improve again.”

Off the mark on debut by nine lengths over an extended mile at Wolverhampton in December 2019, Waldkonig carried a tall reputation into the following June's Listed Newmarket S. and started as the 8-11 market-leader but was readily left behind when third to his stable's burgeoning star Mishriff (Ire) (Make Believe {GB}). Second-best but with a valid excuse when 2 1/2 lengths in arrears of fellow TDN Rising Star Highest Ground (Ire) (Frankel {GB}) in an extended 10-furlong novice at Haydock later that month, he was sidelined thereafter and with 2020 a write-off reappeared a fresh horse with an all-too-tempting handicap mark to exploit at Pontefract. This was another step forward from a colt who can only progress with age, as did his renowned sibling whose career sign-off was that remarkable Arc triumph two years ago.

John Gosden was delighted that Waldkonig had made his mark in this company and said, “He won well at Wolverhampton as a young horse, then in a delayed start to last season people were disappointed when he ran third behind Mishriff but I don't think that was a bad run. He then went to Haydock and he was beaten there, but he came back and had a discharge and it turned out he had a horribly infected tooth and a blocked sinus and needed two operations. He was very ill and luckily he came back and we got him to where we wanted him, but the autumn had gone so he has had a long period off. He has benefitted from that. He has strengthened up and done well. I couldn't be more pleased with him. He went to Pontefract and won well on fast ground and he has won here on well watered ground. He is a versatile horse over a mile and a quarter and a mile and a half. We could look at the [G2] Hardwicke at Royal Ascot [June 19] with something else in between, maybe back here with a three-pound penalty for the [Apr. 27 G3] Brigadier Gerard.”