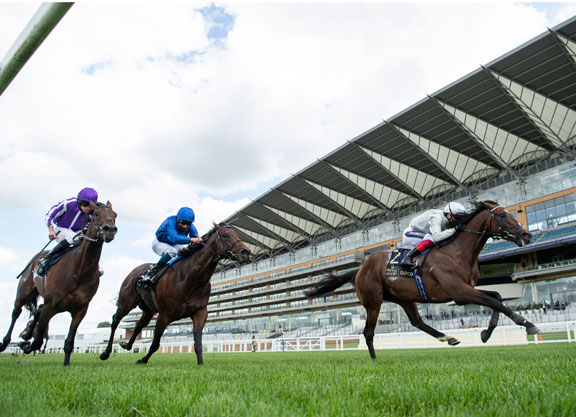 Frankie Dettori ended Royal Ascot's crowd-free week on fire as he took the final day by storm, completing a big-race treble on the TDN Rising Star Palace Pier (GB) (Kingman {GB}) in a pulsating renewal of the G1 St James's Palace S. Making a sizeable leap to this level with even less to justify it than stablemate Lord North (Ire) (Dubawi {Ire}) had on Wednesday, Sheikh Hamdan bin Mohammed Al Maktoum's unbeaten colt of such promise proved well up to standard to provide further evidence of John Gosden's razor-sharp judgment. Positioned behind some frantic jostling and scrimmaging throughout the early stages, the 4-1 shot swooped wide to settle the expected three-horse race with the 11-8 favourite Pinatubo (Ire) (Shamardal) and Wichita (Ire) (No Nay Never) in the last half furlong. At the line, Palace Pier who had won a Newcastle handicap a fortnight earlier had a length to spare over last year's champion juvenile, who reversed 2,000 Guineas form with Wichita by a head.

Palace Pier's achievement brought Dettori the jockey's title for the second year in succession and put him level on 73 Royal Ascot winners with the late Pat Eddery. “I sat next to Pat for 15 years and he was one of my heroes, I used to nickname him 'God' and to equal him gives me great satisfaction,” he said. “We always thought a lot of Palace Pier, but he got a bit sleepy on us in the mornings and we were scratching our heads. John did a great job and threw him in at the deep end today, but in the back of our minds we knew that there was a good horse in that big body. We just were not sure how much of a good horse he was.”

Prior to Saturday, it is fair to say that Palace Pier had enjoyed an easy time of things with his enormous talent nevertheless shining through in two juvenile starts over seven furlongs at Sandown. In the first of those at the end of August, he had the useful Mascat (GB) (Zoffany {Ire}) and Finest Sound (Ire) (Exceed and Excel {Aus})–who was runner-up in Thursday's Britannia H.–as well as new TDN Rising Star Lord Campari (Ire) (Kingman {GB}) well behind, while his second outing in a novice contest was as good as a cakewalk. It was that lack of experience of seasoned battle that saw Gosden swerve the 2,000 Guineas with a colt that he obviously believed had all the raw material to belong in the same exalted company as Kameko (Kitten's Joy) and co.

Twenty minutes before Andrew Balding's star was lighting up Newmarket, Palace Pier had been reappearing in the “Betway Heed Your Hunch” H. on Newcastle's Tapeta for which he was at one stage not even certain to start favourite. Despite suffering a scare as his main rival Acquitted (Ire) (Night of Thunder {Ire}) threatened to get away from him there, he eventually won going away and put an impressive 3 1/4 lengths between them in the last half furlong. Acquitted, who was getting nine pounds from Palace Pier, was a tailed-off last in Thursday's Golden Gates H. here but while he had backtracked it was clear from Palace Pier's homework that he had made a significant forward move.

Anchored exiting the stalls, Palace Pier was allowed to slip in behind as Tom Marquand on Royal Dornoch (Ire) (Gleneagles {Ire}) tried to keep Oisin Murphy wide on TDN Rising Star Threat (Ire) (Footstepsinthesand {GB}) with Ryan Moore on front with Wichita. As William Buick pitched Pinatubo into the thick of the action on the home turn after waiting in the winner's slipstream, Frankie was forced six-wide and it became a true test of character from then on. In contrast to his fence-skimming move on the G1 Coronation S. heroine Alpine Star (Ire) (Sea the Moon {Ger}) minutes earlier, Dettori had to motivate Palace Pier in clear daylight as the expected match race materialised. Having seen off Threat, Wichita fought hard against the rail but it was Pinatubo who caught the eye travelling with all his old menace. Into the lead and seemingly certain victory passing two out, Godolphin's champion juvenile failed to truly get Palace Pier off his case and it was Frankie who would have the final say in the last 100 yards.

“It was my job to keep Pinatubo honest and get him off the bridle and Rab Havlin told me this morning that at Newcastle his last furlong was his strongest,” Dettori added. “He hit the line running and is the best horse–it's as simple as that. He's so laid-back that he could probably reach a mile and a quarter, but a mile at the moment is pretty much what he wants, When you have got a good horse, he is easy to place and I am sure John will have a good plan for him. It is been an unbelievable day and an unbelievable Royal Ascot. To come out of here with six ones is not easy.”

Gosden, who had won this for the first time with the sire Kingman in 2014, commented, “Frankie said he wanted to ride Palace Pier a little cold, as he knew there would be a searching pace. I think Ryan Moore was happy with how the race turned out on Wichita and it got a little rough, but Frankie avoided all of that. He swept round the outside and I think that he demonstrated superior stamina, which he also showed at Newcastle, when he was really strong in the last furlong. It is no fluke. He is a really talented horse and he will go for the [G1] Prix Jacques le Marois at Deauville, which his father won. Pinatubo is a horse that is so fast that the quick mile in the Sussex will suit. I know Charlie has wanted to run him there and I'm sure that is where he is going and I hope he does it like we did with Too Darn Hot.”

“He got a little tibia injury at two, not a big one but enough to finish his season. If you go to a Dewhurst or Jean-Luc Lagardere you've had the experience for a Guineas, but you can't go into one off a novice event,” his trainer added. “The straight mile at Newcastle does not lie and he's a lovely horse who we knew would really like the track. This is a very stiff mile at Ascot and the ground is dead, so it suited him and he showed his stamina. It's fantastic that we are here, perhaps a bit of a miracle, as we only started racing on June 1.”

Charlie Appleby was looking defeat for his stable star in the face for the second time in a fortnight, but he was nonetheless keeping the faith. “I am disappointed to get beaten again, but we saw the Pinatubo we saw last year, for sure,” he said. “From the three to the two there I thought it was just a matter of pressing the button again. Will just said that on that ground, in the last 100 yards the tank was emptying out, but he is so courageous he has held on for second. Like always, we will get him back, speak to the connections. The [G1] Sussex Stakes is an easy mile, we have seen what he can do round Goodwood, he is able to handle the track, so that is always an option. He is still a class animal–we are not going to write him off just yet.”

Miss Caerleona's other class act was the GII Davona Dale H. winner Miss Coronado (Coronado's Quest), later the dam of the stakes-winning Arethusa (A.P. Indy) who was also third in the GI Las Virgenes S. This is the family of the triple group 1-winning 1,000 Guineas and Irish Oaks heroine Blue Bunting (Dynaformer). Beach Frolic's as-yet unnamed 2-year-old colt by Camelot (GB) was bought by SackvilleDonald for 300,000gns at the Tattersalls October Book 2 Sale, while she also has a yearling colt by Highland Reel (Ire).