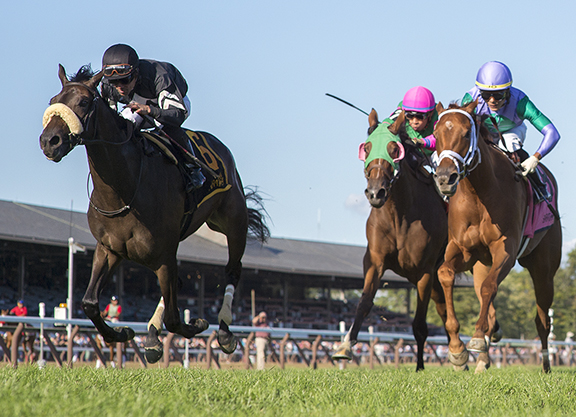 Trainer John Kimmel sent well-regarded juveniles Crystalle (Palace Malice), accompanied by Joel Rosario, and Famished (Uncle Mo) to train on the Belmont turf Sunday. The duo, who are expected to make their next starts in graded company, negotiated four furlongs in :50.55. It was the 13 fastest of 14 at the distance.

“We gave them another maintenance half-mile,” said Kimmel. Both these horses are pretty fit. They worked in company last Sunday [4f, :48.00, 3/11, Sept. 15] and they went again in company this morning and we switched who was inside and who was outside. The dogs were far out and they went in :50 and change.”

Crystalle captured Saratoga’s P.G. Johnson S. Aug. 29 at Saratoga, while Famished graduated at the upstate oval at second asking Aug. 31. Both juveniles are targeting 1 1/16-mile turf races next weekend at Belmont–Crystalle is set for Sept. 29 GII Miss Grillo and Famished will head to the GIII Pilgrim Sept. 28.

“Famished looks terrific on the grass,” said Kimmel. “My thought is if we’re trying to get him to the Breeders’ Cup, it’s probably easier to get him to the Juvenile Turf than it is to the dirt race. He might actually be better on turf than dirt. We don’t know that for sure yet, but he sure looks good on it.”

In regard to Crystalle, he added, “We know for sure Crystalle is better on turf. Those two breezed together on dirt a number of times and Famished annihilates Crystalle. When they breeze on the grass, they’re very compatible.”

Famished, bred in Ontario by Michael C. Byrne, is among the early contenders for the $1-million Queen’s Plate, the first leg of the Canadian Triple Crown at 1 1/4-miles on Tapeta at Woodbine. Kimmel indicated the Queen’s Plate is a long-term consideration for Famished.

“Absolutely,” said Kimmel. “These grass horses seem to transition well to Tapeta. It will be interesting to see how he handles that surface. I think he’d run on anything, he’s such a nice horse.”