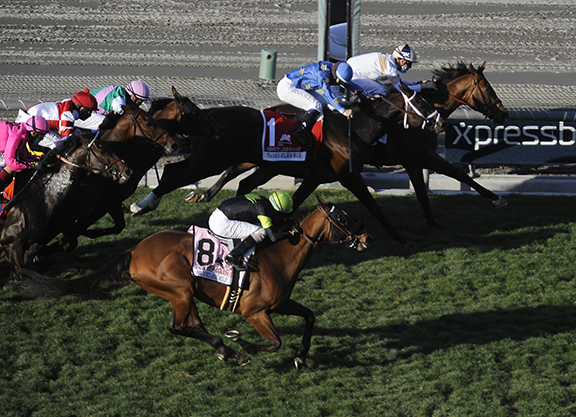 Hit the Road gets up in the Kilroe | Horsephotos

The winner of four straight races and six of nine overall, including a first-ever Grade I triumph for his trainer last out, progressive Hit the Road (More Than Ready) will travel outside of California for the first time in his career to face eight rivals in a competitive renewal of the GI Maker's Mark Mile Friday at Keeneland.

Capturing his first two turf tries, the latter coming in the Zuma Beach S., as a 2-year-old, the bay ran seventh before being disqualified to last in the GI Breeders' Cup Juvenile Turf and was fourth in the GIII Cecil B. DeMille S. That's the last time Hit the Road has tasted defeat, as he followed up a Santa Anita allowance score last spring with a tally in the restricted Oceanside S. July 10 at Del Mar. Given the rest of his sophomore campaign off, he's come back better than ever, dominating the GIII Thunder Road S. by 3 3/4 lengths and squeezing through a narrow opening to take the GI Frank E. Kilroe Mile S. to give conditioner Dan Blacker a career high Mar. 6 at Santa Anita.

Given the narrow nod at 7-2 on the morning line is the lone other Grade I winner in the field, Peter Brant's Raging Bull (Fr) (Dark Angel {Ire}). Rallying to a victory in the GI Hollywood Derby in December of 2018, the now 6-year-old has had a difficult time finding the winning thread since then, scoring just once in his subsequent 10 tries, albeit at the highest level in last spring's GI Shoemaker Mile S. at Santa Anita. The Chad Brown trainee ran a close third in this event last year and was runner-up in the GI Shadwell Turf Mile S. here in the fall before running 10th in the GI FanDuel Breeders' Cup Mile.

Lightly-raced Darain (GB) (Dubawi {Ire}) intrigues as he takes a steep class hike. Starting his career two-for-two last summer in his native land for John Gosden, he failed to hit the board in the G2 Sky Bet Great Voltigeur S. or G3 Darley S., but was a narrow second and registered a sharp allowance score in two tries for Brad Cox this winter at Fair Grounds. Somelikeithotbrown (Big Brown) also commands respect, as his twin 105 Beyers from his runner-up finish in Pimlico's GII Dinner Party S. and victory in the New York-bred Mohawk S. last fall are tied with Raging Bull's Shoemaker figure for field best.