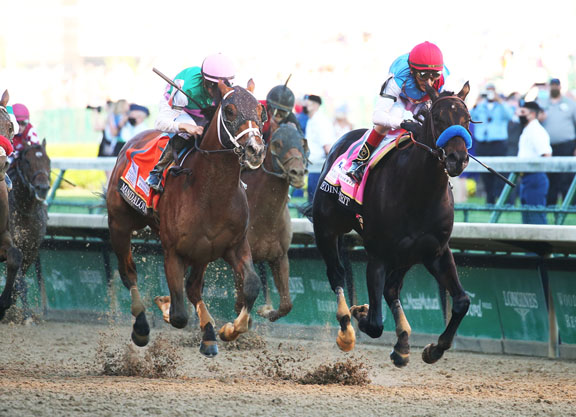 The Kentucky Horse Racing Commission (KHRC) is on the cusp of approving rewritten rules aimed at increasing transparency. The major changes include lifting prohibitions on the public disclosure of alleged violations, new guidelines that establish a 60-day time frame for holding hearings, and the opening of those hearings to anyone who wants to observe them.

Tweaks to the equine drug-testing process are also in the pipeline. They include a requirement for owners and trainers to select an approved lab for split-sample testing within five days of being provided with the list of accredited facilities, and for the KHRC to send off the sample within seven days instead of “as expeditiously as possible.”

The KHRC's rules committee approved all of these proposed changes by unanimous voice vote during its Tuesday meeting. The full KHRC board will vote on adopting them at its Apr. 26 meeting.

Although no one on the committee during the Apr. 19 meeting mentioned Medina Spirit's betamethasone positive and his owner and trainer's under-appeal disqualification from the 2021 GI Kentucky Derby, the KHRC's widely criticized cryptic handling of that controversial, drawn-out case over the last year was the obvious catalyst for proposing the changes.

“Our frustration has clearly come from, you know, we have certain cases that take long periods of time,” said KHRC member and rules committee chairman Mark Simendinger. “Nobody [in the public] knows what's going on. We're not allowed to say what's going on. And so we want to be able to communicate that out.”

Or, as Jennifer Wolsing, the KHRC's general counsel, put it, “[I]n keeping with recent developments encouraging more transparency–especially in the communication of medication violations, but also routine riding offenses–we thought that it would be very reasonable to allow the commission to publicly disclose information regarding an alleged regulatory violation, if and only if such information would not unduly impact an investigation.”

Back on Feb. 15, when KHRC chairman Jonathan Rabinowitz obliquely referred to the Medina Spirit scandal for the first time at an open, public meeting, he vowed that it was “of the utmost importance to this commission” to change the board's long-standing restrictions on disclosure.

But still, several clauses written into the rule proposals would continue to allow for at least some discretionary KHRC lip-buttoning and extending hearing timelines.

For example, the amendments within the public disclosure section repeatedly state that the commission or its executive director “may” publicly disclose information. That's different from stating that the KHRC is required to make such disclosures.

And pertaining to the 60-day requirement for holding hearings, the proposed rules state that the stewards may indefinitely extend the deadline “in their sole discretion, upon demonstration of exigent circumstances.”

In addition, although stewards' hearings will now be considered “open” if the full KHRC board approves the rule changes, there aren't any new guidelines within the amendments about how the public or journalists will know those hearings are going to occur.

Simendinger acknowledged and addressed that public-notice aspect of the hearings prior to Tuesday's vote, explaining that the KHRC needed to strike a balance between disclosure and practicality.

Simendinger gave the example of stewards sometimes needing to meet with alleged violators on the fly, like if a riding infraction occurred in a major stakes and the jockey had to leave town right after the race and wouldn't be able to attend the next day's film reviews.

“We don't want to get into a position where, in the quest for being open and transparent, that we make it so that our people can't conduct normal, routine business that we need to do on a daily basis,” Simendinger said.

“But the flip side of that is we want all of this stuff to be open. So the [hearing] is 'open.' Anybody, they hear about it, they want to come in, they can come in,” Simendinger said. “But it's not going to meet the definition of an 'open meeting' where we have to provide 24-hours' notice [as defined] in the statute.”

KHRC commissioner Bill Landes III postulated a devil's advocate type of question: What if the alleged violator didn't want the hearing to be open to the public?

Wolsing was quick with an answer.

“If that were to happen, I would suggest that the stewards would need to call legal [counsel] and we would talk about why the person wanted the meeting to be closed,” Wolsing said. “If they had a reasonable reason for requiring the meeting to be closed, fair enough. But the way we have it [proposed] right now states that a stewards' meeting 'shall be open.' So that means they would have to cite some sort of statute that says…the stewards' hearing [can legally] be closed.”

Highlights of the rule amendments related to disclosure follow:

“The commission or its executive director may publicly disclose information regarding an alleged violation if such information will not unduly impact any investigation.

“After commission and racing participant receive testing results pursuant to [KHRC rules], the commission or its executive director may publicly disclose the alleged conduct or the alleged amount and type of the medication, drug, or substance that gave rise to the alleged regulatory violation; or

“At any time, the commission or its executive director may publicly disclose the date of an upcoming stewards' hearing; or

“At any time, the commission or its executive director may publicly disclose other information as deemed appropriate.

A summary of proposed changes related to hearings follows:

“A stewards' or judge's hearing, as applicable, shall be conducted by a state steward or a state judge unless waived in writing by the party charged with the violation.

“Stewards' and judges' hearings shall be open. Nothing in this section limits the authority of the presiding stewards or judges to order closure of a hearing or to make other protective orders to the extent necessary or proper to satisfy the United States Constitution, the Kentucky Constitution, federal or state statute, or other law, such as laws protecting privileged, confidential, or other protected information.”

(The current version of the rule states that “Stewards' and judges' hearings shall be closed, and the stewards and judges shall make no public announcement concerning a matter under investigation until the conclusion of the hearing.”)

Regarding split sample testing, the full KHRC board will vote on the following new language:

“Failure of the owner, trainer, or a designee to appear at the time and place designated by the commission veterinarian in connection with securing, maintaining, or shipping the split sample shall constitute a waiver of any right to be present during the packaging and shipping of the split sample.” (The current version of the rule states that if the person doesn't show up, they will waive the right to be present during “split sample testing procedures.”)