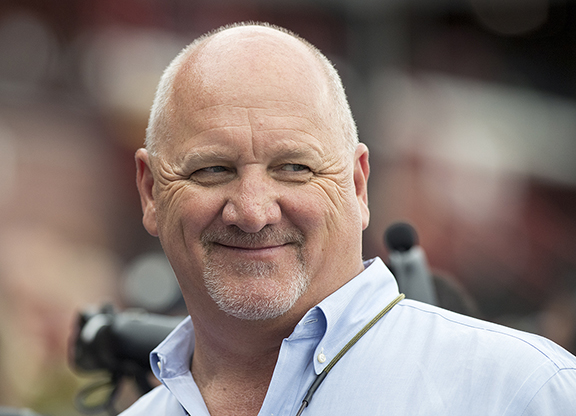 The story of a high-quality Thanksgiving weekend of racing at Churchill Downs was undoubtedly Ken McPeek, who sent out four impressive winners on Saturday's all-2-year-old Stars of Tomorrow card, including GII Kentucky Jockey Club S. hero Smile Happy (Runhappy) and 'TDN Rising Star' Cocktail Moments (Uncle Mo), to follow up a six-length victory by his Envoutante (Uncle Mo) in Thursday's GII Falls City S. Tuesday, the thoughtful McPeek sat down for an expansive interview with the TDN Writers' Room presented by Keeneland to talk about his loaded barn of promising juveniles, how much longer he sees himself training, his thoughts on the first proposed rule set of the Horseracing Integrity and Safety Act and more.

Despite having two graded stakes winners over the weekend, one could argue Cocktail Moments was McPeek's most impressive runner at Churchill. Drifting all the way up to 26-1 off a modest worktab, the $190,000 Keeneland September graduate dropped all the way back to 10th in the 12-horse field before steadily advancing while wide on the turn. Taking charge in mid-stretch, the Dixiana Farms colorbearer put on a show in the final furlong, rocketing away to a 9 1/4-length romp.

“That was a pleasant surprise,” said McPeek, this week's Green Group Guest of the Week. “But I'll tell you, she had been training fantastic going into the race. Typically when we get a young horse ready, we don't force the issue. We let them come [around]. I like to get a race under their belt. I'd almost call the first race a schooling race. I tell the rider to take a little bit of a hold, settle, wait, wait, finish. When they do that, they take dirt in their face, they've got all this adversity, and you lose races doing that, but you also teach them. The young horses that we've gunned away from the gate, they don't learn as much as the ones that take dirt, learn to negotiate the traffic and finish. Well, she finished alright. She came like a bullet. She's been a really happy filly the last couple of weeks, but to be able to predict that first time out is difficult.”

Already with a trio of winners Saturday, Lucky Seven Stable's Smile Happy cemented the day as one to remember for McPeek, settling off the pace and blowing past 7-5 chalk Classic Causeway (Giant's Causeway) in the stretch to a 3 1/4-length score in the Kentucky Jockey Club. That was the second victory in two starts for the $185,000 Fasig-Tipton Selected Yearling buy, who joined fellow graded stakes winners Rattle N Roll (Connect) and Tiz the Bomb (Hit It a Bomb) in the McPeek barn as potential GI Kentucky Derby contenders.

“This horse has out-trained just about every horse he's worked against,” McPeek said. “He's a very physically imposing horse to be around, and he's fast. I stretched him out long the first time and he handled it like a pro, and to beat some of the horses he ran against second time out–he's got the mind of a good horse. I think there's still some fitness that's needed there too. We're going to shelve him for a little while, and I think you're going to see an even better horse when we get to the spring … He's got an interesting pedigree. There wasn't much black type, the first three dams were practically blank. But his second dam is by Relaunch, third dam by Graustark, fourth dam by Bold Ruler, and Funny Cide is under his fourth dam. We're really excited to have him.”

The conversation later turned to McPeek's increasingly impressive training resume. Starting in 1985, his career took off in the 2000s and the 59-year-old now boasts over 1,800 winners and over $95 million in total earnings. Asked to reflect on his career, McPeek went on to break a bit of news in saying he doesn't plan on training for all that much longer–with a caveat.

“I'm probably most proud of finding a lot of these horses at auction, even for modest prices,” he said. “The first 10 years that I trained, I struggled, but I convinced Roy Monroe to let me buy yearlings for him. The first yearling I bought was a Lord At War (Arg) filly that ended up running first, second or third in 15 stakes in her career for Roy and me. Then he let me buy [millionaire and 1995 Derby second] Tejano Run, who launched me. Training horses is not rocket science, but you've got to get good horses to train, and I'm in a unique stage right now where people are giving me bigger budgets. But I'm still buying for what I call the under-50 [thousand] people. I still like working the back end of the sales. I'll wear out a pair of tennis shoes. And Dominic [Brennan] is probably deserving of as much credit as me, because he's been in the trenches with me for 30-plus years. He's one of those unsung heroes–a rock-solid Irish horseman … But I'm going to lay something out there that I don't know if most people want to hear or not. I'm going to do this for 10 or 11 more years. I'm going to train until I'm 70. Unless, of course, I have horses like I've got in the barn right now. But I'm looking at doing it until I'm 70 and then I'd like to work horse auctions for people worldwide.”

Asked for his thoughts on the early HISA rules as proposed by the United States Anti-Doping Agency, McPeek offered, “I think it's fantastic stuff. I think they need to unify the licensing. If I get a driver's license in Kentucky, I can drive all over the country. And then allow reciprocity to take effect when you have a violation. These rules need to be streamlined, there's no question. They need a horseman on those committees making those decisions that has the power to say, 'Hey, wait a second, time out, you're going too far.' But at this point, there aren't horsemen sitting on those, and that bothers me.”

Elsewhere on the Writers' Room, which is also sponsored by Coolmore, West Point Thoroughbreds, Lane's End, XBTV and Legacy Bloodstock, Joe Bianca, Bill Finley and Jon Green discussed the implications of Gun Runner breaking the earnings record for first-crop sires and looked forward to an intriguing GI Cigar Mile H. card Saturday at Aqueduct. Click here to watch the podcast; click here for the audio-only version or find it on Apple Podcasts or Spotify.