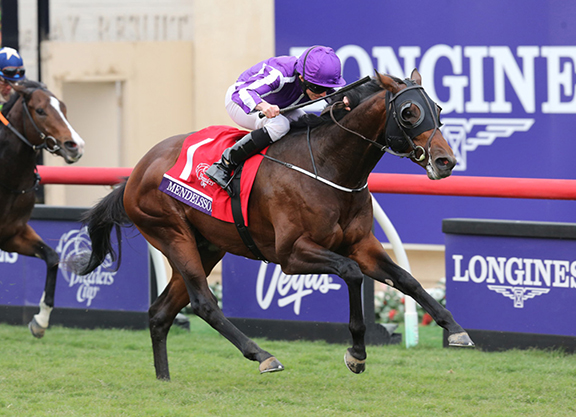 Between the $3-million sale-topping sticker price at Keeneland September and larger-than-life shadow cast by his legendary older half-sister and three-time Breeders' Cup winner Beholder (Henny Hughes), the expectations couldn't have been set any higher for Mendelssohn (Scat Daddy).

The G1 Darley Dewhurst S. runner-up lived up to the billing on the big stage as the lukewarm 9-2 favorite in Friday's GI Breeders' Cup Juvenile Turf at Del Mar, sitting the box seat en route to a one-length tally.

'TDN Rising Star' and GII Summer S. winner Untamed Domain (Animal Kingdom) was spun wide at the top of the lane after racing far back early and kicked on gamely for second ahead of GIII Pilgrim S. runner-up Voting Control (Kitten's Joy), who took a multiple-horse photo for third.

“He's progressed with every race,” winning trainer Aidan O'Brien said of Mendelssohn, who was also pre-entered in Saturday's Juvenile on dirt. “We were afraid to change him up, so we kept him on the grass. He's stepped up every time. This is marvelous. It's been a big team effort this year.”

Hustled along from his rail draw, the bay sat in an ideal spot in third through fractions of :22.83 and :46.87. He popped off the fence to challenge for the lead three-sixteenths of a mile from home and wasn't for catching in the stretch.

O'Brien was tallying a 12th winner on championship weekend and fourth Juvenile Turf win since 2011. Ryan Moore was riding his ninth Breeders' Cup winner, having been aboard this barn's Wrote (2011), George Vancouver (2012) and Hit It a Bomb (2015) previously. This is O'Brien's record 27th Grade/Group I victory of the year.

Mendelssohn, a debut eighth going seven furlongs at The Curragh July 15, stretched to a mile there with a one-length maiden win as the favorite Aug. 13. A dismal seventh–beaten 33 1/2 lengths–in the G2 Howcroft Champagne S. at Doncaster Sept. 16 was quickly erased with a good runner-up finish at 50-1 behind stablemate and GI Breeders' Cup Juvenile entrant U S Navy Flag (War Front) in the Dewhurst with first-time blinkers. Mendelssohn was receiving first-time Lasix for his U.S. debut.

“We always talk a lot of him,” O'Brien said. “His first run he was very green. His second run Ryan [Moore] rode him, and he was very green again. We were a little bit worried to how green he was. Then he went to Doncaster, and the same thing, very green. So when he came back, we decided to put a pair of blinkers on him to see if he could get rid of that greenness, and we did.”

O'Brien continued, “He's a late foal, so physically he's very big and strong, and every week he's getting better. We knew that he was kind of a really American dirt pedigree horse. But we felt we didn't want to stop the progression, that's why we left him on the grass rather than putting dirt in on top when he wasn't ready for it. We had it in our head that if everything went well today, he could be a horse we could train for the [GI] Kentucky Derby. Especially now when we have the Kentucky Derby trials at home.”

Mendelssohn becomes the first Breeders' Cup winner for the late Scat Daddy and his dam joins bluehen mares Primal Force (Macho Uno/Awesome Again), Sweet Life (Sweet Catomine/Life Is Sweet) and Hasili (GB) (Banks Hill/Intercontinental) as the only mares in the history of the Breeders' Cup to produce multiple winners.

“I think it goes without saying we've been looking for the next Scat Daddy, because in his short life, he was a great stallion, and hopefully this fellow will do the trick,” winning co-owner Michael Tabor said. “I think one or two people quibbled about his yearling price, which was $3 million, but I don't think they're quibbling now. So that in itself is satisfaction. So hopefully he'll be the next Scat Daddy, but who knows.”

In addition to four-time champion Beholder and GISW and leading young sire Into Mischief, 1998 Hoosier Debutante S. victress Leslie's Lady is also represented by a Medaglia d'Oro colt of this year. She was bred back to Triple Crown winner American Pharoah. Clarkland Farm purchased Leslie's Lady for $100,000 at the 2006 KEENOV sale.