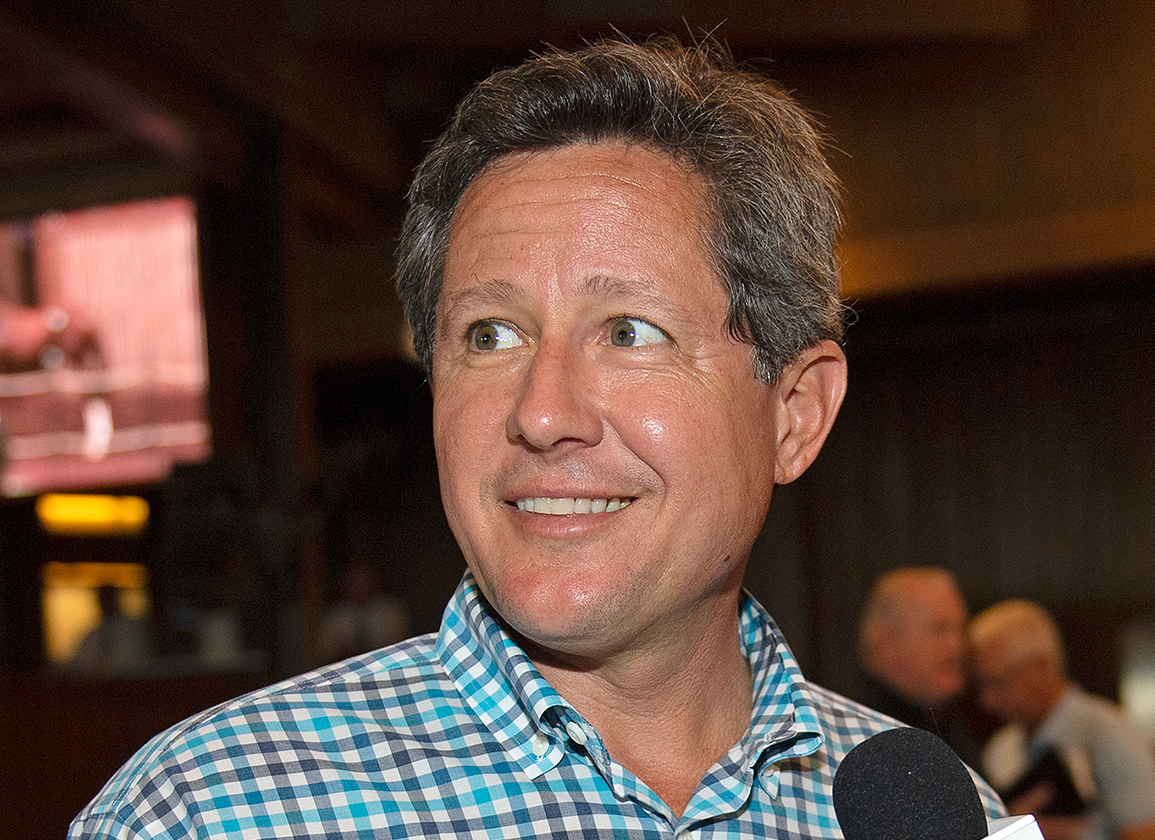 The Keeneland September Yearling Sale marched into its second week with continued competitive bidding as the auction's Book 4 section opened Monday in Lexington.

“There is unbelievable trade here today,” said consignor Peter O'Callaghan of Woods Edge Farm. “There is just a huge crowd up there. And they'd knock you down for a good horse. I'm actually not surprised it's this strong. Not with the way it started and the amount of people who have not yet got to buy horses. It was clear that trickle down effect was going to happen.”

“It was a feeding frenzy,” Gainesway's Brian Graves said of Monday's trade. “That's all. It was just an absolute feeding frenzy. I think that right now the soft spot in the market is at the top, with the absence of Sheikh Mohammed and Shadwell. If there is any soft spot in the market, it's for turf-type horses with European appeal. The tip-top could be considered a little bit soft and probably some good buys were made. And once you get into Book 2, and especially Books 3 and 4, that's where the turnover is and it's extremely strong.”

A colt from the first crop of Mo Town brought the session's top bid when trainer Tom Amoss purchased the yearling for $450,000 on behalf of a partnership of clients. The session-topper was consigned by Gainesway, which was the day's leading consignor with 27 sold for $3,262,000.

The yearling was one of three to reach the $400,000 mark Monday and five to bring $300,000 or more. The top price at the opening Book 4 session of the 2020 September sale–which was held amidst the uncertainty of the pre-vaccination pandemic–was $210,000.

“It's been extremely strong,” bloodstock agent Ben McElroy said of the market. “I thought it was going to be strong going in, with the purses being so high–there are four or five tracks where maiden special weights are running for $100,000–and I think everybody is feeling good and hopefully getting back to normalcy. I think there is so much enthusiasm, it's reflected in the yearling prices.”

It may not have been one of the colt-buying partnerships in the headlines this past week at Keeneland, but Tom Amoss was quietly assembling a package of four potential Classic horses for a new partnership of 10 of his existing clients. The trainer made his highest purchase of the auction when going to $450,000 to acquire a colt by Mo Town (Uncle Mo) (hip 2242) in the name of Ensemble Stables.

“I have tremendous respect for the Uncle Mo line,” Amoss said of the yearling's appeal. “I bought Mo Tom from his first crop. When I saw this horse today, I really liked what I saw. This is a really special athlete, in my opinion. I am fully aware that this was an awful lot–and maybe the highest Mo Town that will sell this year–but I am confident he is an athlete.”

“The trend has been for people to come together and partner up so they can buy better horses,” Amoss said. “We are seeing that a lot at the sales. I might be a little late to the party, but Joel Politi put this group together. We call it Ensemble Stables because it is an ensemble of people. And we are excited.”

“We have completed the group with those four,” Amoss said.

Of the focus on colts, he explained, “It's what appeals to the group. The group was formed with the idea of trying to get an opportunity to win the Kentucky Derby. We wanted to get a lottery ticket to the Derby. And right now we've got four lottery tickets.”

The dark bay was purchased by Stella Stables for $75,000 at last year's Keeneland November sale.

“He was one that Danielle Jones and I had bought last year,” explained Gainesway's Brian Graves. “Danielle has worked at Gainesway for many years. She wanted to get some horses on her farm and we picked that one out together. She took him home and prepped him and she did a great job with him. She was partners with Gainesway on him.”

David Mowat's Ten Broeck Farm, which has enjoyed Grade I success with Kimari (Munnings), added another daughter of the Coolmore stallion to its roster when bloodstock agent Ben McElroy signed the ticket at $400,000 on hip 2163 Monday at Keeneland.

“She was the spitting image of Kimari as a yearling,” McElroy said. “I saw her yesterday and she was the one we had to have.

We tried on a couple of fillies yesterday and got outbid, but since I saw her yesterday, I always had a preference for this filly.”

McElroy signed the ticket at $152,00 to acquire Kimari at the 2018 Fasig-Tipton July sale. The bay filly, second in Royal Ascot engagements in the 2019 G2 Queen Mary S. and 2020 G1 Commonwealth Cup, earned her top-level success in the GI Madison S. in April for trainer Wesley Ward.

“When she walked in the back walking ring, she was all class,” McElroy said. “She's a May foal and there is a lot to look forward to.”

Asked who would train the filly, McElroy said, “We will probably stick to the same plan as Kimari.”

Peter O'Callaghan's Woods Edge Farm has had a bang-up Keeneland September sale, led by a mixture of popular homebreds and prescient pinhook prospects. The consignment had another strong session Monday with a colt by Practical Joke (hip 2070) bringing $285,000 to top the operation's returns on the day. The bay yearling was purchased by O'Callaghan for $110,000 at last year's Fasig-Tipton November sale.

“He is an outstanding physical,” O'Callaghan said. “He was a real powerhouse of a foal and a very good representation of Practical Joke. You'd see a lot of Practical Joke in him, but you'd also see Elusive Quality–those really good Elusive Qualitys who are big, masculine horses. And he was exactly one of those. We had all sorts of interest in him at the sale and he sold accordingly.”

Beyond the popular pinhook, Woods Edge was strong throughout the Book 4 opener Monday as demand continued to be high.

Woods Edge, which had homebred success with a $1.05-million son of City of Light, has sold 34 yearlings through the first week of the September sale for $9,815,000.

“It's been a great sale,” O'Callaghan said. “We had a very strong crop of horses this year, the homebreds and the bought foals. It was a good mix of horses. We weren't in on the foals too deep, our spending was way down last year. It all fit in just right. We are breeding a lot more of them now, so we don't have to chase [the foals] as hard. I still like to buy them and we need to buy them. There is just no fun in these $300,000 foals. You have to keep it to where enough people can bid for them. But everyone is trying to do that. We are all trying to do that and everyone knows it. It's up to ourselves to be disciplined.”