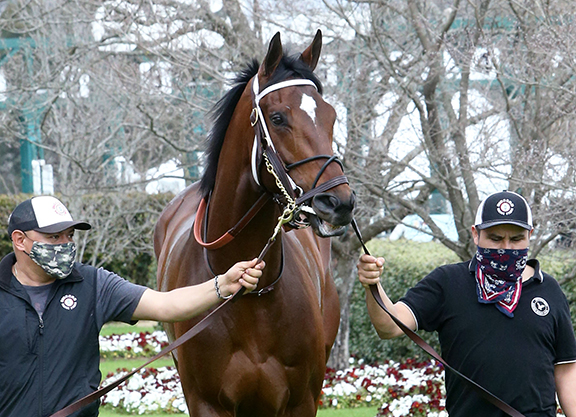 Though he has an option for the $800,000 GII Toyota Blue Grass S. Apr. 3, Keepmeinmind (Laoban) is more likely to remain at trainer Robertino Didoro's Oaklawn base and await the $1-million GI Arkansas Derby Apr. 10, the conditioner told the Oaklawn notes team Thursday.

“It could change, but right now I'm pointing towards the Arkansas Derby,” Diodoro said. “Just being here, not having to ship.”

Second in the GI Claiborne Breeders' Futurity last October and third in the GI Breeders' Cup Juvenile as a maiden, Keepmeinmind rallied from last to graduate in the GII Kentucky Jockey Club S. at Churchill in late November. Stabled in Hot Springs since December, the colt was to have made his sophomore debut in the GIII Southwest S., but when that race was pushed back by nearly two weeks due to extreme winter weather, Diodoro elected to wait for the GII Rebel S. Mar. 13. Keepmeinmind finished sixth, beaten eight lengths, behind undefeated 'TDN Rising Star' Concert Tour (Street Sense).