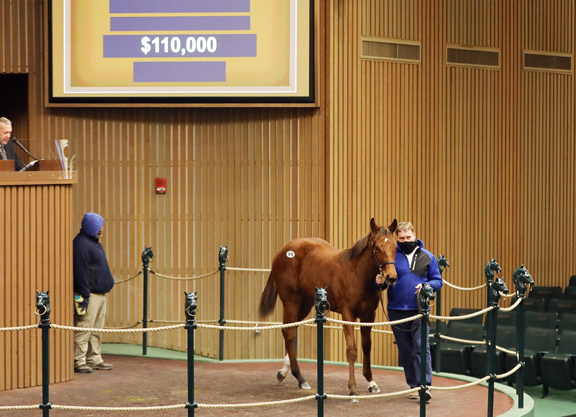 Hip 99, a daughter of Good Samaritan, reaches six figures in the first session of the Keeneland January Sale. | Keeneland

The next time Robert Traylor surveys the back walking ring at Keeneland, his eye for horseflesh is sure to be even more confident than before the start of the week.

At the Keeneland November Sale back in 2017, Traylor brought home a young mare for just $4,000. This week, her short yearling filly by Good Samaritan sold for over 27 times that number, hammering down for $110,000.

Traylor is the farm manager for Maccabee Farm, a growing operation established by Steve and Theresa Belford just seven years ago with locations in both Paris, Kentucky, and Mount Gilead, Ohio.

Traylor still remembers the mare's hip number–3264. Twizzler (Twirling Candy) was one of the last twenty-some horses to go through the ring during the ninth session of the sale that year.

“It was getting late in the sale and I was standing in the back ring watching the individuals come in and I just fell in love with her,” he recalled.

The daughter of Twirling Candy had raced just three times two years prior, her best result being a second-place finish in her debut at Ellis Park, but pedigree made up for her lackluster race record. Her dam Twist Afleet (Afleet), a seven times graded winner and victress of the 1994 GI Test S., had four stakes horses under her name.

Twizzler herself had produced a Mineshaft filly earlier that year and was in foal to Noble Mission (GB) (Galileo {Ire}).

Before he could head up to the sales ring, Traylor called Maccabee Farm's owner Steve Belford.

“Steve and I kind of work as a team,” Traylor said. “He knows all the pedigrees and I scope out the horses. I got Steve on the phone and asked if he was alright with the pedigree. He told me to go for it. She was a big, raw-boned mare and I figured she would go for between $25,000 and $30,000 because she was in foal to Noble Mission, but I got her for $4,000, so I was pretty excited.”

When Twizzler foaled her Noble Mission filly the next year, Belford decided to keep the youngster. The now 3-year-old is putting in her first works at Skylight Training Center.

Twizzler was barren the following year, but was next bred to WinStar's then first-year sire Good Samaritan (Harlan's Holiday). It was quickly apparent to Traylor that the resulting filly could be an exciting prospect.

“She had plenty of bone, plenty of size and a really nice hip on her,” he said. “She was really well-balanced. She had the attitude to be a racehorse. I told Steve that she's probably one of the better fillies we've raised. I said she looks like a Classic horse.”

Belford had to put a lot of consideration into what to do with the youngster.

“We're part of the syndicate on Good Samaritan with WinStar and we wanted to help promote the stallion by selling her,” Belford explained. “But it was really hard because she was such a nice filly and I wanted to keep her myself. She looked the part.”

Belford was satisfied with his decision to part with the filly when she sold to Young Squirrel Stable for $110,000 during Monday's opening session at Keeneland January, becoming her sire's top seller to date.

“We felt she was worth it and we were rewarded,” Belford said. “She was very special. We knew that she was really exceptional and we're starting to see that in a lot of the Good Samaritan foals. We have another colt that we're going to offer in February and he's also really nice.”

Belford reported that Twizzler–who is back in foal to Good Samaritan, as well as five or six other mares from his band–will go back to the stallion again this year.

Most of what Belford's Maccabee Farm breeds is retained to race, with the farm's top earners including stakes winners Tough It Up (Lemon Drop Kid) and Strike Your Light (Majestic Warrior), both Ohio-breds trained by Tom Drury. In 2015, Maccabee Farm bred four-time graded stakes-winning millionaire Factor This (The Factor).

Despite the farm's growing success, Belford says they prefer to stay out of the spotlight.

“We don't really like publicity,” he admits. “If we're going to promote anything it would be the Ohio program because we need to do better with that.”

So Belford and Traylor will look for their next quiet success story, perhaps in finding another mare overlooked by the throngs of buyers at the next sale.

Traylor will be keeping an eye out for just that.

“I was born and raised at Claiborne and I remember the Hancocks always talking about how they liked those big, raw-boned mares because you can get any kind of horse out of them,” Taylor said. “But certain horses, they just catch your eye, you know?”