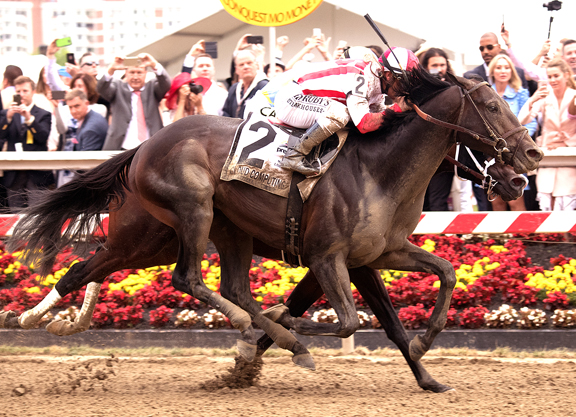 In many ways, Saturday's GI Preakness S. was everything you could ask for in a horse race–from the outset, the GI Kentucky Derby winner and the juvenile champion went head-to-head in a prolonged duel for command, matching strides into the far turn. Just when champion Classic Empire (Pioneerof the Nile) appeared to be home free after shutting the door on Derby winner Always Dreaming (Bodemeister), a new foe surfaced in Klaravich Stables and William Lawrence's Cloud Computing (Maclean's Music). While the striking dark bay did not quite emerge from the clouds–rather an ideal spot tucked along the inside just behind the embattled pacesetters–the $200,000 Keeneland September yearling purchase [click here for sales ring video] stormed to the front in the dying strides to claim the victory by a head in front of a record Pimlico crowd of 140,327.

Since launching their partnership in 2006, the pair of Seth Klarman's Klaravich Stables and Lawrence have made significant investments in the industry with well over 2,000 starters, landing Grade I events with the likes of Currency Swap (High Cotton), Practical Joke (Into Mischief) and Annals of Time (Temple City). For both owners, particularly Klarman–who grew up in the same Baltimore neighborhood that houses Pimlico–Saturday's triumph represented a new level of achievement.

“It was unbelievably exciting,” Klarman said in the aftermath of the race. “I grew up three blocks from here, [and] was a big fan of racing [as] a kid and came to the Preakness many, many times. I never imagined I'd own a horse, let alone be the winner of the Preakness.”

While the fanfare of Saturday provided Klarman with a high that only a select group of winning owners can understand, the prominent hedge fund manager was able to provide some perspective about the congruities between his professional career and his investment strategies in horse racing. Many of the principals are effectively the same, but Klarman emphasized the uncertainty associated with investing in horseflesh.

“In my regular life I'm a long-term value investor,” Klarman explained. “So we make patient long-term investments on behalf of our clients. This is gambling. This is a risky undertaking. This is not at all unlike what I do in the rest of my life, but it does provide one of the highest levels of excitement that a person can have. It's really been a thrill and this is the highlight of our career so far as Thoroughbred owners.”

In fact, the story of Cloud Computing's progression from a first-out maiden winner sprinting six furlongs over Aqueduct's inner track Feb. 11 to his success in Baltimore is largely a testament to a patient approach consistent with the nurturing of a long-term investment. Despite the fact the Chad Brown trainee had secured sufficient qualifying points for the GI Kentucky Derby following a runner-up finish in the Mar. 4 GIII Gotham S. and a third-place effort in the Apr. 8 GII Wood Memorial, the team elected to bypass the Run for the Roses and target the Preakness. With only three starts under Cloud Computing's belt, a try in a 20-horse Derby field would undoubtedly prove to be a grueling experience. Brown was given six weeks between the Wood and the Preakness to mold the son of young sire Maclean's Music into a Classic contender, and he did just that: Saturday ended with Cloud Computing draped in Black-Eyed Susans and his connections basking in the glory of a shrewd business decision.

Cloud Computing and all but one of his nine Preakness rivals passed through the Keeneland sales ring at one point or another before loading into the starting gate at Pimlico, but how did the team of Klarman, Lawrence and Brown identify the handsome dark bay as a suitable addition to their stable in the first place? The answer, according to Brown, is the keen eye of renowned horseman Mike Ryan, who tabbed the colt as a promising prospect well prior to his arrival at the sale.

“I'd say about three or four years ago we added Mike Ryan to help me identify these horses,” Brown recalled. “And he found this horse. We work well together in the sales. He looks at these horses and I'll come in and look at them, figure out what works for us. We work together. But he deserves the credit for finding this one. And his career speaks for itself. He's been doing it a long time. We're happy to have him on our team scouting for us.”

“[Cloud Computing] reminded me of a very good horse we bought for Mr. and Mrs. [William K.] Warren called Bakken (Distorted Humor) that we had with Chad,” Ryan told the TDN's Alan Carasso Saturday night. “This horse–he had legs, class, moved around like a cheetah. I loved his lines and angles. He walked with lightness over the ground, moved with no effort–moved like a cat. We loved him from the very early stages and he showed talent from the get go. Ian Brennan [at Stonestreet, where the colt had his earliest training] was really high on this horse from the beginning. I pinch myself–to be involved with these two horses is just remarkable, very special.”

As for the next step in Cloud Computing's career, the team of Lawrence and Klarman remained non-committal about a possible start in the June 10 GI Belmont S. traveling 1 1/2 miles. Although the colt has already provided a more-than-ample return on their $200,000 investment with career earnings totaling a shade over the $1-million mark and obvious appeal in the breeding shed, there is no reason to believe the April foal cannot continue to progress in the future under the careful management of Brown.

“There are plenty of big races ahead,” Lawrence, also a financier, said. “We trust Chad and feel very confident in him. He'll let us know how the horse is doing and his team–they're working there every day. We're not there in the barn every day. I think we're pretty good about making suggestions but following Chad's lead. If he says go, we'll go. If he says no, we're not going to go.”