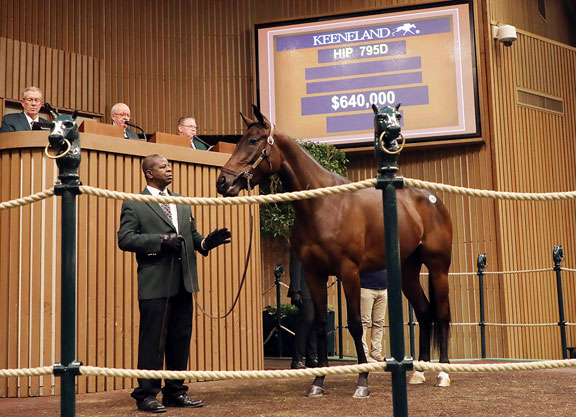 LEXINGTON, KY–Michael Donohoe’s mid-winter trip to Kentucky was made entirely worthwhile on Tuesday when Enaya Alrabb (Uncle Mo), the Grade I-placed 4-year-old he had purchased as a yearling for the Saudi Arabian-based Enaya Racing, topped Book 1 of the Keeneland January sale on a bid of $640,000 from agent James Schenck.

The BBA Ireland agent has bought a handful of horses from the U.S. to run successfully for Enaya Racing in Saudi Arabia, like the three-time Saudi stakes winner Madtap (Tapit), and Donohoe explained that when his client learned he was headed to Keeneland September in 2017, he wanted in on the action.

“The Saudis follow American racing quite closely,” Donohoe said. “I told him I was going to Keeneland and he said he’d like to have a horse or two in the U.S. I was always a fan of Uncle Mo–I thought he’d had a great start–so I was coming to Keeneland looking to buy an Uncle Mo.”

Up at barn 27 in the Hunter Valley Farm consignment, Donohoe landed on a filly selling on day two of the sale by the Coolmore sire out of Lotta Rhythm (Rhythm), a stakes-winning and Grade II-placed half-sister to Lotta Kim (Roar), the dam of Horse of the Year and GI Kentucky Oaks and GI Preakness S. winner Rachel Alexandra (Medaglia d’Oro).

“I came across this filly at Hunter Valley,” Donohoe recalled. “[Hunter Valley co-owner] Adrian Regan is a good friend of mine and to be honest I wasn’t convinced, but Adrian gave me that little bit of encouragement to go ahead and buy her.

“She was a beautiful physical. She cost $150,000 and for an Uncle Mo at that time with that pedigree-Rachel Alexandra was already on the page-she was a good buy. Adrian had said to me, ‘Mick, there aren’t too many people on this filly,’ and he couldn’t understand why.”

It didn’t take long for Enaya Alrabb to justify the hunch of her consignor. After being broken in and pre-trained in Lexington she was sent to the Southern California stable of two-time Kentucky Derby-winning trainer Doug O’Neill on the advice of Donohoe’s good friend and California-based agent Niall Dalton. Making her debut in August of 2018 going six furlongs at Del Mar, Enaya Albrabb weakened late to finish fourth.

“She was a bit green on her first start; she was a bit of a slow learner but she ran quite well,” Donohoe said. Enaya Alrabb reappeared at Santa Anita going a mile in late October and broke her maiden by 2 1/2 lengths under Flavien Prat. After that, it was Hall of Famer Mike Smith in the saddle for the remainder of her career.

With one last chance at 2-year-old Grade I black-type remaining, O’Neill pitched the filly into the GI Starlet S. in early December. Enaya Alrabb rewarded connections with a game second under Smith, a head behind American Pharoah’s three-quarter sister Chasing Yesterday (Tapit).

“As Doug sometimes does he took a shot and he fired her into that Grade I and she ran a great race; she really validated everything Doug had said about her,” Donohoe said. “And Mike Smith had said good things about her too, to be fair. He had sat on her before that and really liked the filly.”

Two months later, Enaya Alrabb was out for her 3-year-old debut in the GII Las Virgenes S., where she found only the champion 2-year-old filly and three-time Grade I winner Bellafina (Quality Road) too tough. Sadly, Enaya Alrabb would never get a chance to truly show where she ranked among her division, as she injured a tendon shortly thereafter.

“We were super excited, as was the owner,” Donohoe said. “She was going to go on the Kentucky Oaks trail but then unfortunately she got a bit of a tendon. We gave her some time off and did stem cell treatment and we gave her all the time she needed. We brought her back and she was maybe six or seven weeks off a run and unfortunately she tweaked that tendon again, so that’s how she ended up in the sale.”

Enaya Alrabb was supplemented to the Keeneland January catalogue as hip 795D and was sold through Irishman Pat Costello’s Paramount Sales. Donohoe explained that he has been longtime friends with both Regan and Costello dating back to their earlier days in Ireland.

“We would have normally sold her under Hunter Valley but Pat Costello’s brother-in-law works for the owner in Saudi Arabia,” Donohoe said. “Paramount did a great job selling her and I know Pat well–he’s from the same town as me, Kilkenny, in Ireland, so I’ve known him a long time.

“I’ve known Adrian a long time too, and all the Irish guys in Kentucky. It’s great when you’re coming out here and you give these guys the heads-up and they give you their recommendations. Certainly when Pat and Adrian give you a recommendation or a bit of advice and tell you to go look at a yearling, you take note and take their advice on board.”

“This filly genuinely had the chance to be a proper Grade I winner, even though she was just Grade I-placed,” he said. “That was the angle to her; she really did have that potential. Mike Smith loved the filly. He came down to Santa Anita every Saturday to ride her. When a Hall of Fame rider and a trainer like Doug O’Neill tell you that she had the potential to be the real deal, she was probably a good buy for those people who bought her.

“There was a real ding-dong battle in the ring and it was the Coolmore guys who were underbidder. They stand the stallion and were quite high on her. Keeneland did a great job promoting her as well. They sent camera crews down there to interview Mike and Doug and they really got behind her. They did a great job and so did Paramount; it’s just one of those great stories.”

It’s quite possible the story is just beginning, with Donohoe having bought a first-crop son of Uncle Mo’s GI Kentucky Derby-winning son Nyquist-again for $150,000-for Enaya Racing at Keeneland September last year.

“He’s being broken in at the moment,” Donohoe said. “I went to look at him during the week and he’s coming along nicely, so we’re hoping lightning is going to strike twice. It would be the obvious choice to send him to Doug O’Neill because he trained Nyquist as well and he did a great job with the other filly. That would be the plan.”

“Racing has always been popular in Saudi, but with the Saudi Cup coming up in February it’s going to the next level,” he said. “They race on the dirt out there so stories like this will hopefully encourage more Saudi owners to have horses in training in the States.”