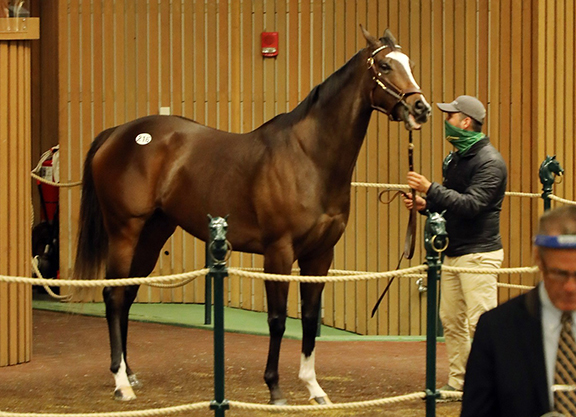 Despite the upheaval and chaos caused by COVID-19 this year, the Keeneland November Breeding Stock Sale proceeded during its usual spot on the calendar following the Breeders' Cup, which was held at the Lexington oval this year. Starting on Nov. 9, the auction concluded its 10-day run Wednesday with nine million-dollar mares, topped by Grade I winner Concrete Rose (Twirling Candy), who sold to Larry Best's OXO Equine for $1.95 million.

“If I had a takeaway from this whole fall, it's a word we usually use this time of the year, which is 'gratitude,'” said Keeneland's President Elect Shannon Arvin. “This year we're all feeling gratitude to consignors, breeders, sellers, buyers, media–our whole industry–for being so resilient through tough times. We're all very pleased with results from our fall.”

Arvin continued, “I think with some of the innovations we've had, with the internet bidding and phone bidding, we've found creative ways to participate and see the horses when we can't necessarily be right here in a way we are accustomed to being.”

“Once you get into Book 3 to the end of the sale these people are more motivated to sell and to move on and to continue trade,” said Geoffrey Russell, Keeneland's Director of Sales Operations. “We're fortunate in that we are able to satisfy that market.”

When asked if he thought breeders were holding on to their mares and weanlings given the current economoy, Russell said, “Our numbers were down the same for mares and foals. This is the factory and you don't have to sell the factory every year. They can hold on for the next year. A weanling you can hold, so those people decided to hold on until the yearling sale which is another viable option.”

The 2019 edition of this auction was topped by champion Take Charge Brandi (Giant's Causeway), who brought $3.2 million from Hill 'n' Dale at Xalapa, while carrying a foal by Justify. There were 14 mares who brought seven-figure price tags last term.

Best was the sale's leading buyer by gross with 17 horses purchased for a total of $7,965,000. Eight of those 17 were mares to add to Best's burgeoning broodmare band and to support his new stallion Instagrand (Into Mischief), who stands his first year at stud at Taylor Made for 2021. Best's other nine purchases were weanlings to add to his racing stable.

International buyers from Japan, the Middle East, Europe and beyond are typically quite active at the Keeneland November Sale. Despite travel restrictions caused by the ongoing pandemic, the foreign contingent was still a heavy presence at Keeneland.

Leopoldo Fernandez Pujals's Spanish-based Yeguada Centurion was the sale's third-leading buyer with 22 horses bought for $3,857,000. Japan's Shadai Farm was number seven on the buyers list with three horses purchased for $2,540,000.

“Even with the restrictions in travel, we do have representatives from pretty much all the countries that we have done business with in the past–Saudi Arabia, Turkey, Korea, the Japanese, and the Europeans,” Russell said. “Everybody appreciated the effort they've made if they've used our technology or actually came here to buy we're very fortunate we were able to do that. For both sales, we got international waivers for [buyers from] countries that have issues getting in here. As an industry, we worked with the government to try to get international waivers for anybody who wanted to come here.”

Arvin added, “That's a credit to our public officials as well. We worked with them to overcome what was basically an international travel ban to the United States.”

Keeneland added internet bidding during its September Sale to aid buyers who could not attend the sale due to COVID-19 restrictions and that option remained popular in November. There were 2,993 bids made over the internet throughout the 10-day auction. A total of 245 horses were sold to online bidders for a gross of $16.062 million, or 10.2% of the gross.

“Internet bidding was very popular in September, but it seemed to be even more popular in November,” Russell said. “While it was used in the first three days at the top end, we have sold a lot more actual horses each day of the second week than we did in the first week. People are comfortable buying a broodmare off the internet. Credit needs to go to the consignors. That provide information to buyers, whether on their websites or sent to them–photographs, videos–directly to these buyers when they made requests. Consignors have been very helpful in marketing their horses to these people who are bidding remotely.”

The co-highest priced weanlings of the 2020 November Sale were a pair of babies by Ashford Stud's resident Triple Crown winners. A colt from the first crop of 2018 Horse of the Year Justify (Hip 21) summoned $600,000 from bloodstock agent Donato Lanni and a son of 2015 Horse of the Year American Pharoah (Hip 244B) brought the same price from Coolmore's M.V. Magnier. The latter, who was supplemented to the sale, is a half-brother to MGISW juvenile Jackie's Warrior (Maclean's Music).

American Pharoah was leading sire of weanlings by gross with 11 of his foals selling for $2.44 million. Justify topped that category by average with five of his weanlings selling for an average of $427,000 and a gross of $2.135 million.

Top sire Uncle Mo was the sale's top covering sire with 13 mares in foal to the Ashford resident, bringing $5.89 million. Into Mischief was second on that list with seven mares carrying foals by the Spendthrift stalwart selling for $4,790,000.

The horses of racing age section of the Keeneland November Sale is always popular and this year that portion was topped by 'TDN Rising Star' Hidden Scroll (Hard Spun) (Hip 3295), who brought $525,000 from Fergus Galvin, acting on behalf of Marc Detampel. The 4-year-old racing or stallion prospect was sold by WinStar Racing on behalf of Juddmonte Farms.

“We've been working on the racehorse section of the catalog for the last couple of years,” said Russell. “WinStar were the first people to come to us and ask to have a portion of this sale around racehorses. It has grown exponentially since and I think we will be looking at it as we go forward into 2021 and improve on it.”

Wednesday's 10th and final session of the Keeneland November Sale was topped by the 4-year-old colt Mutakaamil (Tapit) (Hip 3753), a racing or stallion prospect, who was purchased by Jeff Engler, acting on behalf of Lea Farms LLC.