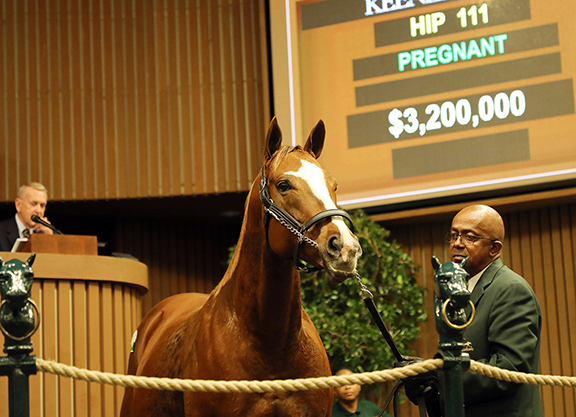 The Keeneland November Breeding Stock Sale concluded its 12-session run Sunday in Lexington with 14 million-dollar mares and increases in gross and average, but overall figures closely in line with the auction’s 2018 renewal.

“The November Sale continued the trend of robust trade, evidenced by a clearance rate of nearly 80%, and healthy returns that we’ve experienced in recent years,” Keeneland President and CEO Bill Thomason said. “We saw strong participation by major domestic and foreign buyers, and a number of new buyers, who enthusiastically invested in broodmares and weanlings–both long-term commitments–which indicates an optimistic view of the sport.”

Hill ‘n’ Dale Farm’s John Sikura made the auction’s highest bid, going to $3.2 million to buy out his Elevage partners on the champion mare Take Charge Brandi (Giant’s Causeway). The 7-year-old was one of 14 to bring seven figures during the auction. Three of those million-dollar transactions came from the Hill ‘n’ Dale Sales Agency’s Elevage Dispersal offerings.

Thirteen horses sold in the Elevage dispersal of the partnership which included Sikura and Craig Bernick of Glen Hill Farm, for a total of $11,700,000 and at an average of $900,000.

Signing as Hill ‘n’ Dale at Xalapa, his new operation on Xalapa Farm near Paris, Kentucky, Sikura was the November sale’s leading buyer, with 10 purchased for $5,351,000.

Sikura also made the biggest purchase at the 2018 November sale, going to $4.2 million to acquire the star mare Lady Eli (Divine Park), who was one of nine million-dollar transactions a year ago.

The November sale saw wide participation from a deep bench of international buyers. Japan’s Shadai Farm ranked second among all buyers by gross, acquiring four broodmares and broodmare prospects for $3.6 million, while the fourth-leading buyer at the sale was newcomer Leopoldo Fernandez Pujals from Spain, who bought 16 broodmares and broodmare prospects for $3.3 million in the name of Yeguada Centurion. Arif Kurtel of Turkey was the sale’s leading buyer by number purchased, acquiring 59 horses for a total of $1,717,000. Saudi owner Khalid Mishref purchased two of the top-priced horses of racing age: Liam’s Legend (Liam’s Map) for $325,000 and New York Central (Tapit) for $240,000.

“We’re seeing a change in the international marketplace,” Keeneland Director of Sales Operations Geoffrey Russell said. “For instance, for purely economic reasons there are fewer South American buyers here. We are seeing more support, particularly in Week 2, from Turkey, Saudi Arabia and South Korea. Keeneland representatives visit these and other countries on a regular basis to establish relationships and reap benefits. People enjoy when you make an effort to meet them on their home turf. They appreciate that fact, and they reward us by coming to buy at Keeneland.”

The weanling market remained competitive, but selective, during the November sale, with a filly by Curlin becoming the highest-priced foal sold at public auction in North America this year when purchased by Larry Best’s OXO Equine for $775,000 out of Book 2. The filly was consigned by Indian Creek.

“The buyer base is what keeps things going here,” said Indian Creek’s Sarah Sutherland. “For us, the traffic has been good in the barns, and you hope when you come up here you have something that more than a couple of people want.”

Best was the leading buyer of weanlings, acquiring the two most-expensive foals, which also included a colt by Curlin for $750,000, to bring his total purchases to six weanlings for $3.02 million. Best’s week in Lexington also included the sale-topping $5-million Blue Prize (Arg) (Pure Prize), as well as three weanlings, at the Fasig-Tipton November sale.

Taylor Made Sales Agency was the leading November consignor for the third consecutive year and the 23rd time since 1987. The consignment sold 292 horses for a total of $27,511,100.

The results of the November sale are an optimistic sign for the overall industry, according to Keeneland officials.

“The sales are a great opportunity to take the pulse of horse people,” Keeneland’s Vice President of Racing and Sales Bob Elliston said. “There is clearly an understanding within the breeding community that the industry has to take significant action to restore public trust as it relates to safety and integrity, and they are confident the industry will make those changes. They also see positive signs like growth in purse structure nationally and the strengthening of Kentucky’s racing circuit. All of these factors enhance the opportunity to race a horse and make a return on your investment.”