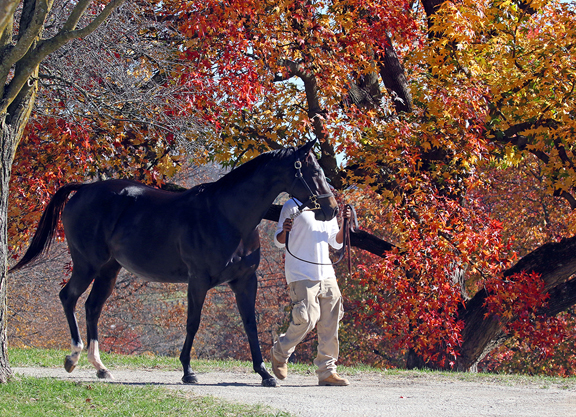 LEXINGTON, KY – The Keeneland November Breeding Stock Sale continued to generate steady trade as its two-session Book 3 opened Thursday in Lexington. A pair of mares from the Bluewater Sales consignment brought the day's co-highest price of $300,000 and were joined at that price by a weanling colt from the first crop of Mendelssohn who was purchased by Larry Best from the Four Star Sales consignment.

“I think it's been fair,” Four Star's Tony Lacy said of the market. “When you peel back the layers, I think this has been fair on both sides. Good horses are bringing good money. I think that horses that are perceived to have lesser value are a tougher sell. And I'm not saying that they are not good horses, but it's just that there is a polarization for some better horses. But we are selling most of them, which is encouraging. I think, all in all, I have to say we are very pleased with how it's turning out.”

Duncan Taylor of Taylor Made Sales Agency agreed that, given all the economic and pandemic uncertainties swirling around the auction, the November market was holding up well as it entered its Book 3 section.

“I think it was steady,” Taylor said as Thursday's session was winding down. “I don't think you got a lot of extra money at any point, but I think things were bringing about where we had them valued. There were still plenty of people wanting to buy. So I think it's positive. I think the market is good. I'm not saying it's great. There are a lot of people who selling horses who aren't making any money, but things are moving and there is trade going on. We didn't have many RNA's today, so that's always a good sign.”

The Keeneland November sale continues through next Wednesday with sessions beginning daily at 10 a.m.

Patrick Masson signed the ticket at $300,000 to acquire Sex Symbol (Uncle Mo) (hip 1183) for his family's Green Lantern Stables. The 3-year-old mare, who sold in foal to City of Light, is a daughter of Grade I winner Icon Project (Empire Maker) and is a half-sister to graded winner Fashion Business (GB) (Frankel {GB}). She was consigned by Meg Levy's Bluewater Sales.

“Physically, she checked all of the boxes,” Masson said. “I like the cross of Uncle Mo over Empire Maker. The mother has the same breeding as Pioneerof the Nile and the pedigree goes back to the foundation mare La Troienne–and that was all very attractive to us. The mare was a dirt mare, even though she was able to run on turf in England. She has produced a turf horse, but it's mostly a dirt pedigree and that's what we are gearing towards now.”

At last year's November sale, Masson purchased Ultimate Cause (Giant's Causeway) (hip 1301)–also from the Bluewater Sales consignment and also in foal to City of Light–for $310,000.

“I bought a mare from Meg last year in foal to City of Light and we really like the baby that we got this year,” Masson said. “So that was also a factor.”

Of the mare's final price, Masson added, “In this book, I didn't think there would be many horses over $250,000, but I wasn't surprised by that price for this mare in particular. That was my top price. I thought I would pay $200-250,000, but at $300,000 there were obviously multiple people involved in the bidding. We were happy to get her.”

A few hips earlier, Bluewater Sales sold another filly for $300,000. John Moynihan signed the ticket as Springbord Farm to acquire the racing or broodmare prospect Quality Heat (Quality Road) (hip 1149). Racing for Gary Barber and trainer Mark Casse, the 3-year-old filly was third in last year's Chelsey Flower S. and Tepin S. at Aqueduct and in the Woodbine Cares S. In her lone start this year, the dark bay was third in an Aqueduct optional claimer in January. She was working regularly through September at Casse's training center.

Larry Best continued his buying spree at Keeneland November, going to $300,000 to acquire a colt from the first crop of Grade I winner Mendelssohn. The bay weanling (hip 1269) was consigned by Four Star Sales and was bred by Malia Hopkins. He is out of the unraced Abuntia (Olmodavor), a half-sister to multiple graded stakes winner St. Joe Bay (Saint Anddan).

“That was incredible,” said Four Stars' Tony Lacy. “We knew we had a nice colt at the barn. Quality has been selling very well and we were optimistic, but again you never know where that level is as far as what a horse like that can bring. Obviously, he is a great advertisement for the stallion. Mendelssohn has been an exciting stallion. A lot of people have really been trying to find the better specimens by him. And there are a lot to choose from. So that was exciting. I did not see that coming necessarily, but it was a pleasant surprise.”

Peter Pugh, as agent for Cherry Knoll Farm, purchased a colt by Flatter for $205,000 to lead early weanling returns Thursday at Keeneland. The bay colt, consigned by Claiborne Farm and bred by Bradley Purcell, is out of Speedy War (War Front) and is a full-brother to stakes winner Stifling.

“Right now he'll be a resale, he's a pinhook,” Pugh said. “He is a big scopey, live-family, Flatter. That's about all you need.”

Asked how he has found the weanling market this week in Lexington, Pugh said, “It's been extremely difficult.”

Pugh initially said he wasn't surprised by the competitive marketplace, but qualified his response, “Actually, I'm a little surprised because of everything that's going on. But once you get to that upper end–you've heard it over and over again–it gets hard.”

Of spending over $200,000 for a pinhook prospect, Pugh said, “To get the horses you need, you're always spending 20% too much. That's just the way it goes. Hopefully it will follow through for next year.”

The 6-year-old Pinchbeck (Mineshaft) (hip 1139), in foal to Mastery, will be joining the Elm Tree Farm broodmare band after Jody Huckabay purchased the 6-year-old for $200,000 Thursday at Keeneland. The bay mare was consigned by Everett Dobson's Candy Meadows, which purchased her for $30,000 as part of the Sarah Leigh dispersal at the 2016 Keeneland January sale. Her dam Seeking Atlantis (Seeking the Gold) sold at that same auction for $300,000.

“We tried to buy her mother several years ago and underbid her,” Huckabay said. “It's a Ned Evans family–they know what they are doing, it's just a great family. I've been waiting and waiting on her and my daughter Caroline found her. It's a family operation and when we all agree on one, we try to buy them.”

The mare is carrying her first foal and Huckabay said her covering sire Mastery was another selling point.

“We own a share in Mastery and we support him and we're big fans of Claiborne,” Huckabay said. “Obviously they sold very well this week and we had a very nice yearling by him in September. So we think he's cut out to be a really good stallion and we just think it's a really good cross.”

Huckabay said he was doing plenty of shopping at the November sale, but had not bid on many mares.

“We've done a lot of looking,” he said. “This is the third mare we've bid on. It's tough to find young mares. You just have to siphon through all these mares and figure out what works for you. Everybody has different criteria.”