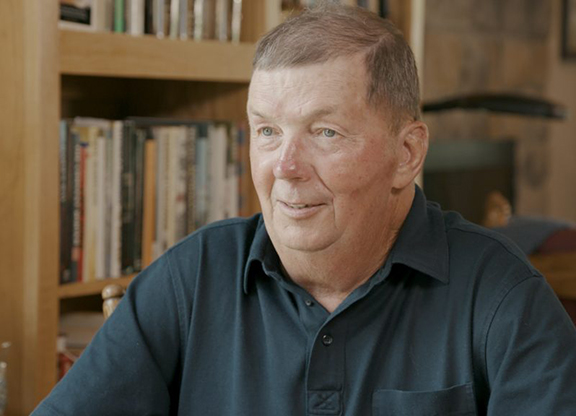 TDN is proud to partner with the Keeneland Library and the Nunn Center for Oral History at the University of Kentucky Libraries in a very special collaboration: the Keeneland 'Life's Work' Oral History Project, a series of filmed interviews by TDN columnist Chris McGrath with significant figures in the Thoroughbred industry. The current installment, with Gus Koch of Claiborne Farm, appears here.

Legends, to you and me. Immortals, paragons. But to Gus Koch, they were the flesh-and-blood companions of his daily toil: some were cherished friends; others, just a pain in the butt. He worked with Natalma in Canada, her son Northern Dancer in Maryland, his son Nijinsky II at Claiborne.

It was at Claiborne, for 31 years, that Koch ran perhaps the most potent breeding shed in Turf history, having been hired as manager soon after the young Seth Hancock had taken the reins.

“Secretariat, of course, was the hype name for non-horse people,” Koch says. “Then we had Danzig, Mr. Prospector, and Nijinsky. Sir Ivor, Damascus. The stallions we had in that barn were just unbelievable.”

Great horses, and great horsemen, have been the fabric of his career. Even when he first met his future wife, Koch was giving a shot to a 31-year-old Triple Crown winner. A Sunday afternoon at Stoner Creek Stud, outside Paris, Kentucky; everyone else has gone home, and Count Fleet is down with colic. And here comes a car, a bunch of girls from Lexington, and one of them turns out to be Theresa. You never know what's round the corner, whether with people or horses.

Now he sits at home at Mt. Carmel Farm, just a few miles up the road, his retirement sustained by pride in his 10 children. All five boys have followed him into the horse business, and rather more directly than did Koch himself when-having grown up on a grain farm, north of Cincinnati-absorbing the interest of his father, who wrote for periodicals on agriculture as well as racing and sales.

“We always had riding horses,” Koch recalls. “My first was a former lead pony from River Downs. Horse named Billy. I loved that horse. My dad just loved racing and we were always at the Keeneland sales, or at the old Latonia, or at a fair meet.”

Formative experiences, evidently. Nevertheless Koch likes to say that he lived in Ohio for 18 years but grew up in the United States Marine Corps. He had just left high school, Vietnam was beginning to smolder, and they had a Marine quota to fill the day he went before the draft board. Koch put his name down. That night he found himself in California, standing in line “on the yellow footprints,” waiting with suitcase in hand for the barber's chair.

“And off all our hair comes,” he says. “There were some hippies in our group. I mean, I was a farm boy. But they had hair down to here. It was very hard on them. We had one guy in our draft who tried to kill himself, the second or third night. Even that was brutal. They called us out in the middle of the night. We're in our skivvies. The drill instructor is going nuts. He's got a bayonet. He said, 'The next one of you idiots wants to try this, let me show you something. Don't you cut across here. You put this bayonet in here. You take it all the way to your elbow and you better be dead when I find you.' Oh yeah, he challenged us. It was very intense.”

Click here to read the rest of this Life's Work, presented by Keeneland.