Keeneland Kitchen to Serve as Epicenter for Free Community Meals 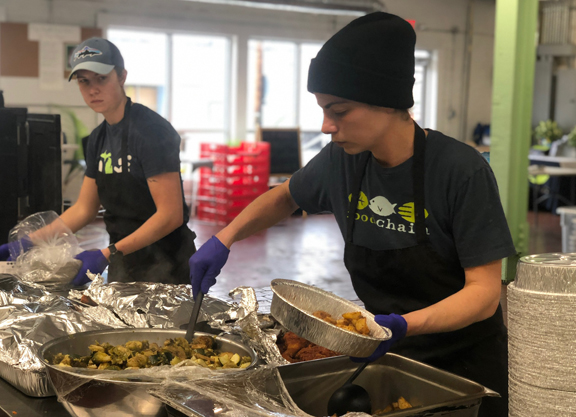 The commercial kitchen at Keeneland Race Course will serve as the epicenter for a production facility that will use displaced Lexington-area hospitality workers to prepare and deliver free meals to people and organizations that need them in the wake of the COVID-19 pandemic.

Marc Therrien, the executive chef and managing director of Keeneland's hospitality, is overseeing the association's integration of volunteer efforts with FoodChain and Nourish Lexington, which are two charitable groups collaborating to use the skills and talents of local chefs, businesses, farms, funders, and nonprofit agencies in order to feed community members.

“FoodChain has been coordinating meals from their headquarters, but they can't do it alone,” Therrien told TDN from his home Tuesday afternoon, where he was cooking up a hearty sausage gravy while briefing a reporter on the community-wide efforts.

“Keeneland's been helping them out since last Friday, but the Nourish Lexington program kicks off [Apr. 8],” Therrien explained. “There are groups popping up all over the place that have this need for meals–churches, school children, emergency workers, all sorts of things. So I think everybody's been reaching out and trying to plug in the holes as much as they can.

“Where Keeneland comes into it is we're putting a lot of resources into it to help build the operation,” Therrien explained. “We're preparing the meals from the Keeneland kitchen as a test pilot program over the next three days. And then once we have the operation streamlined, we're going to use that game plan, and hopefully other commercial kitchens around Lexington will volunteer, so we'll have meals prepared from and going to multiple locations. Right now it's just beginning, and we'll see how far we can go with it.

“So for the next three days we will be doing 150 meals per meal period to drop off and distribute at Whitaker Park, and we'll also being doing another 200 meals on Friday to FoodChain directly. So it will be 650 meals a week to start,” Therrien said. “Right now everything is going like clockwork. Wednesday will be the true test, but I don't really see a big problem with it.”

He then added in a confident deadpan: “I mean, after being used to feeding 30,000 people at a race meet, 150 lunches shouldn't be too difficult for us.”

Craig Bernick, the president of Glen Hill Farm and a founding board member of the Thoroughbred Idea Foundation, told TDN that his family's Lavin Family Foundation has been active in matching out-of-work hospitality workers in Chicago with donated meal providers in that region, and he wanted to do something in the same vein for Lexington residents.

“Lindsey and I live in Lexington now, so we wanted to do some of the same in Lexington,” Bernick said. “I know that Keeneland is a huge donor to the local community, so I thought they would be able to point us in the right direction because they get so many grant requests for charities that are looking for help.”

Bernick said Keeneland suggested the FoodChain and Nourish Lexington initiatives, so the Lavin Foundation made a donation that initially went to help provide lunches for Fayette County School children who would have typically received free school lunches.

With help from others in the community, the two programs have expanded markedly over the past several weeks to meet rising needs.

“They're good programs,” Bernick said. “They're taking displaced service industry workers–people who might have worked the Keeneland meet, or who work in hotels, the convention business, or at Rupp Arena–and they're bringing them into a kitchen to prepare boxed meals for members of the Lexington community.”

“The workers are earning a stipend to come in and work, but not so much that they can't apply for unemployment benefits,” Bernick explained. “Any donation is a double donation, because you're not only helping to feed hungry people, but your donation goes to pay for helping displaced workers.

“It's a difficult time because the world is at a standstill,” Bernick said. “That means the economy is at a standstill. All of the charities that people traditionally support are going to be even more in need now.”

Keeneland president and chief executive officer Bill Thomason said that “Keeneland is so fortunate to be part of the central Kentucky community, and sharing our team's talents and our resources to benefit the community is key to our mission. It's who we are.

“These hospitality workers and local families who find themselves in need right now, they are our fans, our colleagues and our friends who support Keeneland year-round,” Thomason continued. “Keeneland will do whatever we can to help them and strengthen this community that we love so much.”