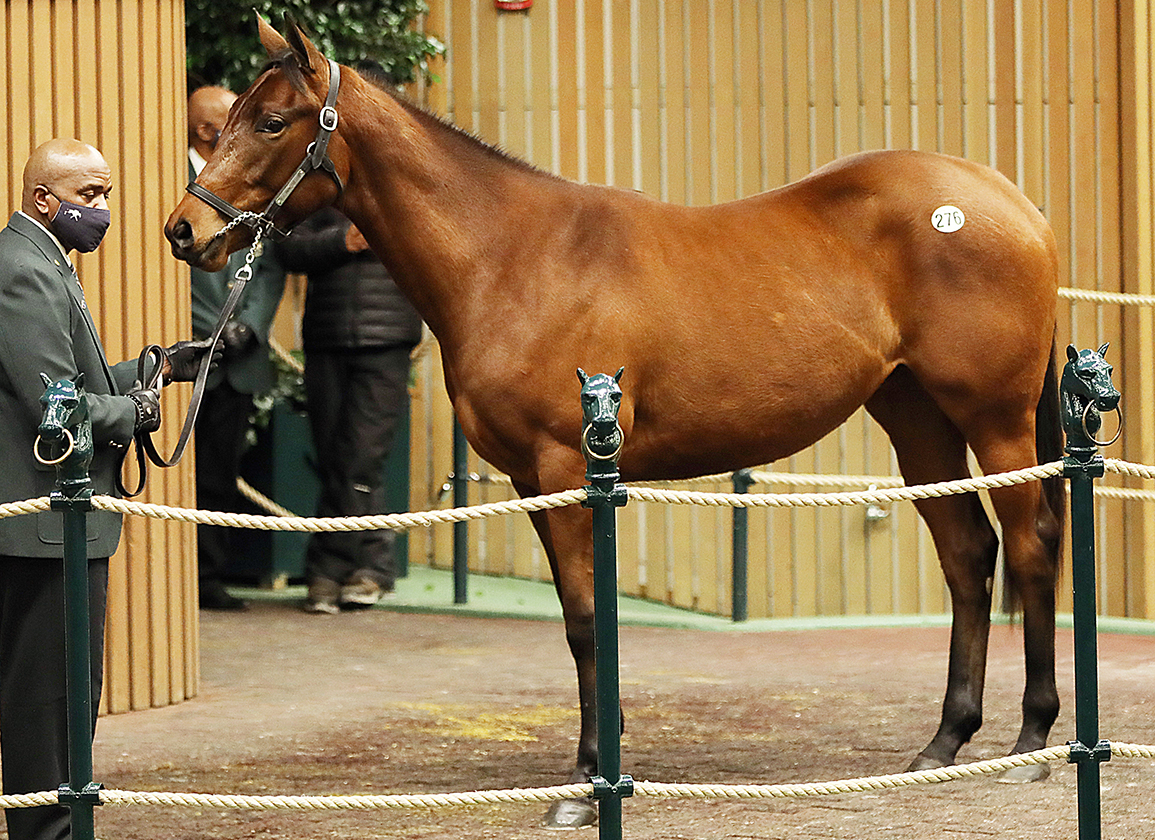 The Keeneland January Horses of All Ages Sale concluded its four-day run in Lexington Friday with steady figures which continued to show strength in the marketplace into the new year.

“We are very, very pleased with the sale,” said Keeneland's vice president of sales Tony Lacy. “Continued competitive trade, high clearance rate and high median price have solidified some confidence in people who were nervous before the beginning of the sales season. They feel positive about moving forward into the rest of 2022 and are investing as such. The market is very broad in all respects; you're not seeing the spikes and valleys indicative of a narrow market. Demand is strong, with multiple bidders on horses at all levels, but not overheated. Prices, even the higher ones, are fair, believable and sustainable.”

The 2021 January sale was dominated by the dispersals of Sam-Son Farm and the late Paul Pompa, Jr., which combined generated gross of $13.5 million. Despite lacking those types of high-power dispersals, this year's auction produced fairly similar results.

“The high clearance rate continued through the middle and even lower end of the market, and that is really encouraging because this isn't a barometer sale like September and November,” Keeneland Director of Sales Operations Cormac Breathnach said. “This is a new tax year and yet there's the same hunger to buy horses where there hasn't been for years. That's a really good sign.”

“Comparable horses have been selling well compared with previous years,” Cauthen said. “Generally, when you bring a horse to January, you intend to sell. The number of horses not sold on Thursday was incredibly low. That means people are buying, and that is the name of the game.”

“I think the higher-priced horses were fair,” Lacy said. “They weren't extraordinary, they were I think very rational and more sustainable over the longer term. I think it gives a feeling of confidence moving forward that there is viability in breeding a nice horse, whatever level it is, that you can get a return profit and get it moved along.”

Belgrade's late entry to the January sale was the highlight of a strong supplemental catalogue.

“The quality of the catalogue was very strong when it initially came together, but the ability to add a small number of supplements, such as Belgrade, who sold so successfully for Randy and Sandy Bradshaw, was very rewarding,” Breathnach said.

“I think pinhookers are looking forward hopefully to another very strong year,” Breathnach said, while agreeing it seemed like some sellers were being protective of their yearlings this early into the new year. “This past September was extremely good, with a record median among other metrics, so I think there is that confidence that the market is currently in a good state of supply and demand. There's a lot of energy behind the sport in terms of new ownership and new money that showed up in September, and it's not an overheated market. It's very solid, especially for the middle. So they might want to roll the dice deeper in the year than maybe they have in the last several years. There were also quite a few yearlings who traded for $200,000 or more, especially in Book 1 and that's a sign that what was offered was very popular.”

Best was the leading buyer at the 2022 January sale, but this time his purchases were all mares as he looked to support his three young stallions. Best paid $1.49 million on six horses.

Ron Winchell and Three Chimneys donated a 2022 no-guarantee season to Gun Runner to support relief efforts from last month's tornadoes in Western Kentucky. The season was auctioned off at the end of Tuesday's first session of the auction was brought a final bid of $130,000 from Bill Layni.

“This was such a generous gesture by Ron Winchell and Three Chimneys, and Keeneland was very pleased to have been able to facilitate the sale of the Gun Runner season,” Lacy said.