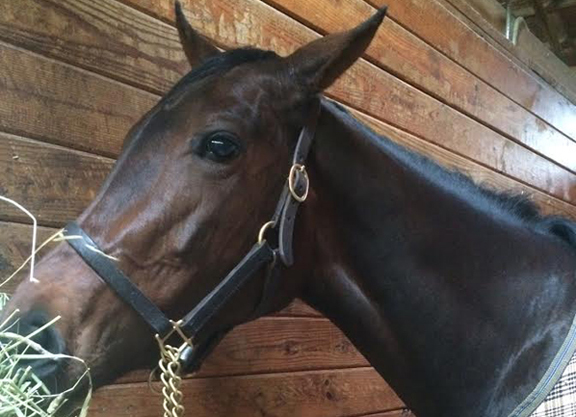 Penn National Race Course is known by many as a track that fills its cards with races for older horses and claimers, but to those who followed racing at the oval during the month of November, it is hard to deny that a juvenile star was born. Peter Kazamias's Behrnik's Bank (Bank Heist), a homebred in the truest sense of the word, has led wire-to-wire to capture her first two starts by a combined 31 1/2 lengths–never threatened and never asked by jockey Edwin Gonzalez.

Conditioned by Dimitrios Synnefias, the filly romped by 18 1/2 lengths in her Nov. 4 unveiling [VIDEO] and recently scored by 13 lengths in hand in the Blue Mountain Juvenile Fillies for Pennsylvania-breds on Thanksgiving eve [VIDEO], stopping the clock .78 seconds faster than GI Breeders' Cup Sprint third-place finisher Favorite Tale (Tale of the Cat)'s victory two races later. With plenty to be thankful for, Kazamias said he plans to bring the filly to the Empire State for her next start.

“She came out of the [last] race really good,” the owner said. “We're looking for the New York Stallion Series Fifth Avenue S. at Aqueduct Dec. 20.”

According to Kazamias, Behrnik's Bank showed ample ability during every stage of her development process, including her workouts in company at his Rising Sun Farm prior to her career debut. Nevertheless, he said the connections approached the race with a guarded sense of optimism.

“I never really worked her six furlongs, we only went five-eighths with her [prior to her first start],” explained Kazamias. “She worked very good with other horses and she beat them easily. Sometimes you just don't know until you put them in a race, but she was impressive since day one. We figured she was going to win that race, we knew that. But she proved it was not a fluke when she ran in the stakes and did the same thing.”

Equipped with confirmation of the dark bay's ability, Kazamias said his goal is to remain patient and allow Behrnik's Bank to gradually climb the class ladder.

“We're just trying to keep her sound and good and comfortable, and just move her through the next races,” Kazamias continued. “We might look at [the Busanda S. at Aqueduct Jan. 23] going one mile and 70 yards, but we want to see how she comes out of the [Dec. 20] race, obviously, and we will see where we go from there. I can tell you I'm looking for a mile race after the New York Stallion race. I want to start stretching her out. The filly is built like one that is better going long anyway. She doesn't have a sprinter body–she's got a body that looks like she can go long. I'm dying to try her out over a distance.”

Behrnik's Bank became the first winner for freshman stallion Bank Heist (Maria's Mon), a half-brother to champion Midnight Lute (Real Quiet), who stands at the breeder's Kaz Hill Farm in Middletown, New York. The filly's dam, Behrnik (Chimes Band), was a hard-knocking mare claimed by Kazamias for $25,000 in the twilight of her 45-start career. While the mating seems unlikely to produce an immensely talented runner on a surface level, Kazamias said he has had faith in Bank Heist since the day he acquired him.

“It's an amazing thing to raise the filly, to train the filly and have her turn out as good as we think she is,” he said. “It's a blessing, and it's really good for the stallion. I've always thought he's good and I've bred a lot of mares to him.”

Kazamias recently reaffirmed his confidence in Bank Heist in the aftermath of Behrnik's Bank's success, significantly raising his stud fee from $2,500 to $10,000. The dark bay was purchased for stud duty at Kaz Hill after notching one win from six starts for trainer Todd Pletcher and owners George Bolton and Gulf Coast Racing. Kazamias noted that he was captivated by the horse's one victory in which he smoked a field of maidens at Saratoga, earning a 94 Beyer Speed Figure.

“I really liked the race he won very impressively–:21, :44, 1:09 at Saratoga–so I knew the speed was there,” recalled Kazamias. “I figured he got hurt and that's why they got rid of him, but I always thought he would produce good horses.”

If patience is the goal with Behrnik's Bank and other members of Bank Heist's first crop, Kazamias added he is resisting the urge to showcase their talent to attract more external interest. The stallion has roughly 60 foals on the ground to date, and the Cyprus native said he plans on breeding 50 mares to him in 2016.

“They're working really good, very fast,” he acknowledged. “So I'm just taking my time with them. I'm not looking to run them tomorrow to prove anything–I'm doing whatever is right by the horses. I just sent about 20 of [Bank Heist]'s babies out to Ocala to be broken, so I really do believe in him.”

Thanksgiving provided another thrill for Team Kaz when Gaston and Anthony Grant's Green Gratto captured the GIII Fall Highweight H., providing his stallion Here's Zealous (Dehere) with his first graded stakes success. Yet another Kazamias success story, Here's Zealous was claimed for $50,000 by the horseman in 2005 as a stallion prospect in the penultimate race of his 31-start career.

Winner of the GIII Gravesend H. in 2001, the chestnut has passed on speed and consistency to his offspring. On paper, Kaz Hill-bred Green Gratto has reached a level of achievement comparable to his sire, while other runners have enjoyed success at smaller tracks like Penn National.

“Here's Zealous produces horses that have tremendous speed,” commented Kazamias. “We do great out [at Penn National]. We run a lot of horses out there that are Pennsylvania-breds [and] I'm actually thinking of moving him out to Pennsylvania [permanently]. He does very well with his speed and producing babies with a lot of speed.”

With a full stable of runners sired by Bank Heist and Here's Zealous, Kazamias and trainer Synnefias compete their regional racing stock out of their Rising Sun training facility in New Egypt, New Jersey. The farm is complete with a five-furlong training track.

“Basically, we train off the farm and run everywhere–Pennsylvania, New York, [New Jersey],” concluded Kazamias. “I feel the horses do a little bit better there. They're more comfortable and relaxed. We have paddocks, so we take good care of them.”

If the success of Behrnik's Bank is any indication of what is to come, Kazamias's operation is poised for a memorable 2016.