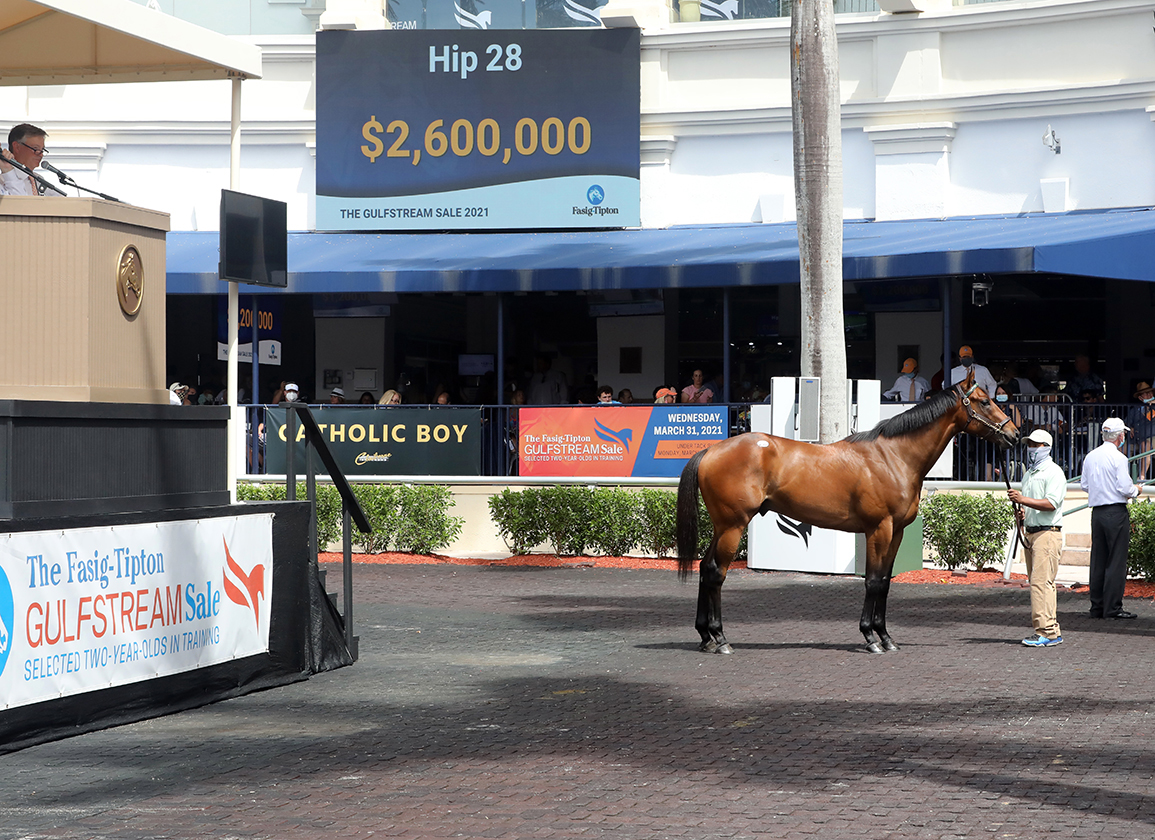 It may still turn out that we're living under a volcano. For now, however, the first major bloodstock cycle after the trauma of 2020 represents an almost symmetrical, V-shaped recovery–right back to the $200-million breakthrough made by the American 2-year-old market in 2019. Despite restocking with a diminished pool of horses, compared with then, this sector has resembled a giant stress ball in retrieving all its former buoyancy the moment the squeeze was released.

It was the juvenile consignors, of course, that were first broadsided by the pandemic last year. Somehow they got through OBS March, though an air-raid siren might as well have welcomed every horse into the ring, before a dazing series of cancellations or postponements. From the catalogs that were salvaged, the ratio of scratchings approached two-in-five as alternative solutions were improvised with trusted clients, from private sales to racing partnerships. Those that persevered into the ring did so very much with a “fire sale” mentality: cut your losses, get your jabs, start over. The final reckoning, at public auction, obviously didn't represent the full picture but offered a vivid measure of the pain: aggregate turnover collapsed by 38% from $203,206,700 to $125,956,800 and average transactions by 24.4% from $95,807 to $72,388.

A $200-million juvenile market in 2019, remember, had represented a fresh landmark in a breathless bull run for the whole bloodstock industry. Some of us then responded with wiseguy finger-wagging: since perennial growth had historically proved impossible, capitalism instead depended on cyclical correction of overheated markets. But just as nobody could have predicted this particular needle, nor could anyone confidently assert that a new balloon might be inflated virtually overnight.

Unsurprisingly, consignment was somewhat leaner this time round. Pinhookers had tightened their belts, while yearling vendors were no doubt less ambitious with their reserves (being less inclined simply to retain a horse and try again next spring). Nor should we forget an ongoing decline in the available pool, the North American foal crop having subsided from 35,000 to around 20,000 since the previous economic shock of 2008. That narrower base has improved the solidity of this market. The RNA rate at juvenile sales in 2007 was around one-in-three, and has in recent years consistently been one-in-four or better.

Indeed, the clearance rate is the more spectacular of all the indices of recovery in 2021, with no fewer than 83% of animals into the ring finding a new home, up from 77.4% in the booming (and bigger) 2019 market. In other words, the symmetry of this 'V' rally can be pretty well ascribed to pure demand. And perhaps that's no surprise, given the forecasting consensus. Yes, the pandemic has been catastrophic for many businesses. On the other hand, those whose affluence is unimpaired find themselves straining with pent-up spending capacity.

For around a decade, leading up to the pandemic, the entire international bloodstock market had been nourished by the fiscal response to the 2008 crisis, with quantitative easing and marginal interest rates fostering liquidity. Then came the tax breaks lavished upon the wealthiest during the last presidency. Throw into the mix a universal suppression of indulgence over the past 15 months–everyone, after all, has been freshly reminded that life is for living–and you have a perfect recipe for a renewal of demand for luxury goods. (And that, as we who view them as a vehicle of subsistence are apt to forget, is precisely what the Thoroughbred racehorse is.)

Some commentators on the wider economy admittedly consider this too fragile a foundation for sustainable recovery. Their fear is that the distribution of wealth, which has not been so unbalanced for a century, leaves too many people unable to contribute to the consumption that drives the economy. If that is so, the stakes are plainly high for the various stimulus programs.

Indeed, those instead predicting a 'K'-shaped recovery see many of the ingredients that fed the Great Depression back in place, with spending power only able to meet production capacity by personal debt. Marriner S. Eccles, chairman of the Federal Reserve under Roosevelt, famously compared the Depression to “a poker game where the chips were concentrated in fewer and fewer hands, [and] other fellows could only stay in the game by borrowing… When their credit ran out, the game stopped.”

So while the resilience of this particular market is a massive relief for many professional horsemen, making a modest living by their skill and sheer hard work, you can bet that some analysts are lining it alongside prices for art and sportscars and sensing trouble ahead.

Be that as it may, for now we can be extremely grateful for such an enthusiastic resumption of investment in our industry. As a result, many a humble household is back on its feet. The juvenile sector, after all, is perhaps the one that trims its sails most bravely into the weather. It tries to eke out extra value from an adolescent Thoroughbred that may already have been through the ring twice, as weanling and yearling–with no backstop, no Plan B. A very strong yearling market, moreover, simply elevates the base costs and places a daunting premium on firing a “bullet” at the under-tack show.

So we're looking at horsemen of unusual flair and endurance. Volatility is embedded in their program. We all read the “home run” headlines, but each of those must repair the damage made by the duds. A market that fluctuates so wildly, then, only adds to a routine precariousness.

Let's take a snapshot of the middle market, where so many pinhookers operate, via the median at Keeneland September–and compare that with the average juvenile dividend. 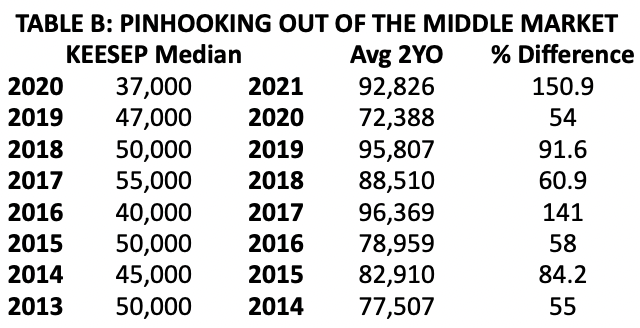 Obviously we're not comparing like with like, but we can see that even at the best of times consignors find themselves either stranded on the beach or catching a rising tide, with very little middle ground. The pinhooker who had operated in the middle market at Keeneland in 2019, with a $47,000 median, last spring sold into a market averaging $72,388. That didn't leave a lot to work with, once the intervening bills had all been paid.

Conversely, they could restock much less expensively–the Keeneland median down to $37,000–and this time round a $92,286 average will have allowed many to patch up some of the holes in the roof.

As for those stallions who best served their cause, I always consider the table of juvenile averages misleading. Many stallions are represented by so small a sample at the 2-year-old auctions that a single knockout price can conceal a multitude of deficiencies; while often even the highest averages fail to match the same crop's performance at the yearling sales. Let's take a look at the top 20 sires (minimum four 2-year-olds sold) by average–but let's also compare those yields with their averages/medians with the same crop at the yearling sales. 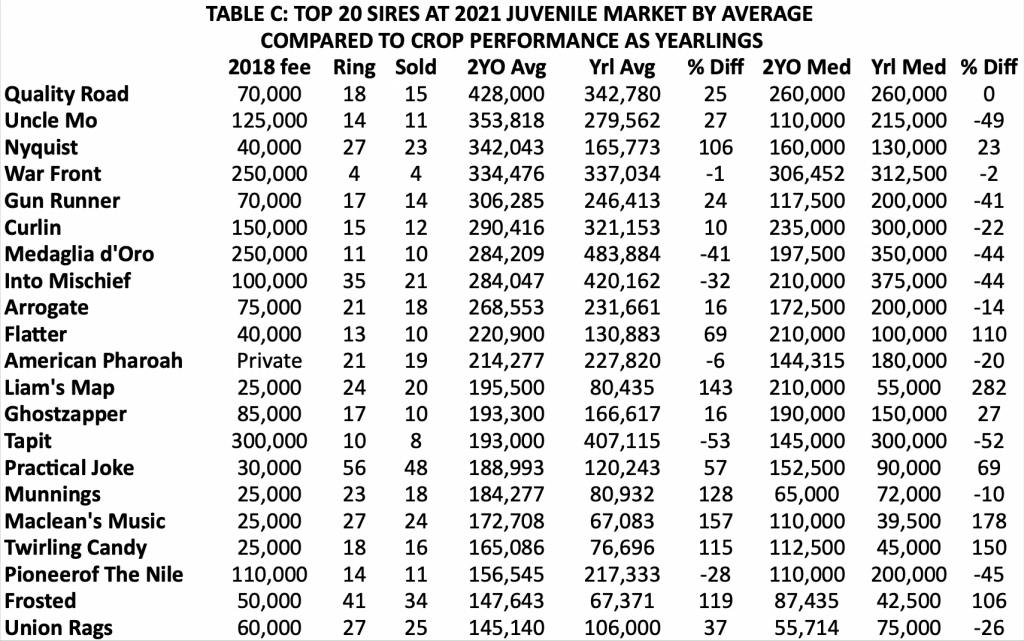 We see that even class leader Quality Road, with a $1.5-million colt to boost his average, actually had an unchanged median. Runner-up Uncle Mo, similarly aided by a $1.3-million sale, made a presentable advance by average but his median was down by half. And third-placed Nyquist, who made impressive gains by average, made only a modest advance with his median.

In fairness, the remarks about a small sample cut both ways. The median, from so limited a group, is perhaps not that instructive. Nonetheless hats off to Flatter, Liam's Map, Maclean's Music, Twirling Candy and Frosted for doubling (or better) their medians in passing stock through 2-year-old consignors. Practical Joke's fine debut in this sector is also clearly legible, whether by average or median. But one or two of the bigger hitters missed their mark this time, for once even champ Into Mischief. His rise had been very well measured by this sector, but in 2021 he rehoused only 21 of 35 juveniles, with his average and median both receding. A rare blip, and if a whole market can bounce back from one dull year, so can the stallion of the decade.