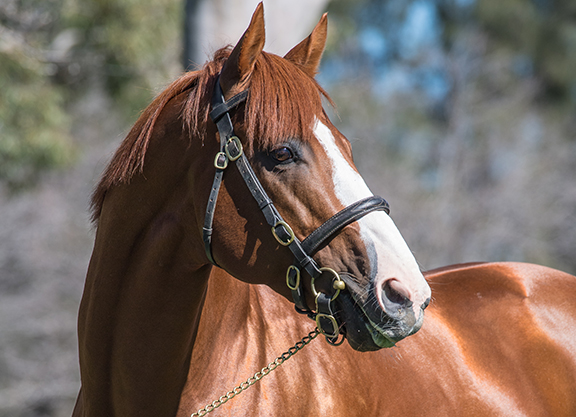 Kept at home as Meditate (Ire) (No Nay Never) went to Royal Ascot, TDN Rising Star Statuette (Justify–Immortal Verse {Ire}, by Pivotal {GB}) was able to comfortably follow her stablemate's lead by taking Sunday's G2 Airlie Stud S. at The Curragh. Already the focus of attention on breeding, the chestnut put fuel on the fire with a fluent win on debut over an extended five furlongs at Navan May 28 and travelled easily throughout the early stages of this six-furlong contest formerly known as the Balanchine. Asked to take closer order to the leading trio before halfway, the 4-6 favourite had to work to get to Badb (Ire) (Footstepsinthesand {GB}) inside the last 150 yards but was soon in command en route to a 3/4-of-a-length success from that 25-1 outsider, with Matilda Picotte (Ire) (Sioux Nation) the same margin back in third. “She has a beautiful mind, great stride and an unbelievable physique,” Aidan O'Brien said after welcoming his eighth winner of this prize. “We think the Justifys are something to look forward to.” . Race replay.

Statuette, whose half-sister Tenebrism (Caravaggio) was the winner of the G1 Cheveley Park S. on her second start, is being prepared for the major late-summer and autumn prizes according to her trainer. “She's a very big filly, she's 16 2 1/2, and we were only training her three-quarters ready because we had our eye on the last part of the season,” he explained. “With that type of filly if you train them too hard you wouldn't have them at the end of the season when you want them. We were a little bit worried when the ground got soft that she could have gotten very tired, but obviously just her class got her through. She travelled lovely and Ryan nursed her, she won lovely in the end.”

“She's a sister to Tenebrism, but she'd carry her on her back as she's a massive big powerful filly this one,” he added. “She's probably not as precocious as a filly running at this time of year tends to be, but she has so much class she was able to run and do it rather than us making her do it. When she was able to do it we didn't like stopping her, but at the same time we weren't chasing her in any way at home. We think she's a Guineas filly. She's a filly with a lot of class and you'd imagine she'd have no problem getting a mile. The Moyglare, the Cheveley Park, all those races are there for her. Obviously we have the filly that won at Ascot [Meditate] as well. The lads will probably keep them apart.”

The dam Immortal Verse, who captured the G1 Coronation S. and G1 Prix Jacques le Marois and was bred back to Justify last year, topped the 2013 Tattersalls December Mares Sale when knocked down for 4.7million gns. She is a daughter of the Listed Prix La Camargo winner and G3 Prix Fille de l'Air runner-up Side of Paradise (Ire) (Sadler's Wells), who is also the second dam of the G1 Queen Elizabeth II S. runner-up Roseman (Ire) (Kingman {GB}) and the G1 Futurity Trophy-placed Baradar (Ire) (Muhaarar {GB}).

Side of Paradise is out of Richard Strauss's Kilfrush Stud's exceptional broodmare Mill Princess (Ire) (Mill Reef), who issued an abundance of leading lights directly and indirectly headed by the star sprinter Last Tycoon (Ire). Among her most notable producers were Last Tycoon's G3 Prix du Bois-winning full-sister The Perfect Life (Ire), Save Me the Waltz (Ire) (Kings Lake) and Zelda (Ire) (Caerleon). Under this trio are the likes of the G1 Poule d'Essai des Pouliches heroine Valentine Waltz (Ire) (Be My Guest), the GI Matron S. winner Sense of Style (Thunder Gulch) and Galileo's trio of top-level-winning siblings Hermosa (Ire), Hydrangea (Ire) and The United States (Ire).