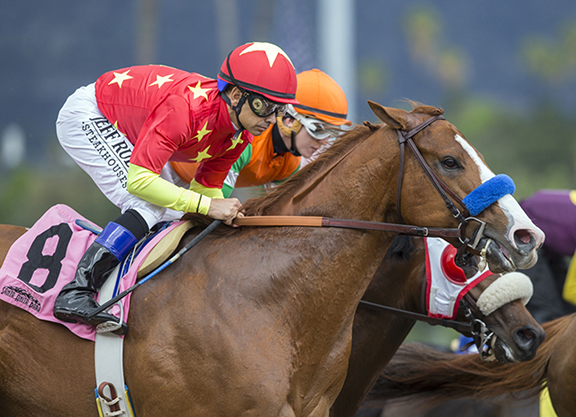 “The China Horse Club and WinStar Farm share the use of colors on the horses we race in partnership,” said Harrington. “Every fourth start, a horse will race in China Horse Club silks. The sharing of silks ensures both the WinStar brand and China Horse Club brand are promoted. As an ownership group, we are very tight-knit. The credit for the quality of our relationship rests with Mr. Kenny Troutt and Mr. Teo Ah Khing. Regardless of the colors that are worn on our horses, we all cheer passionately; we all cheer as one. As a club, we are very fortunate that the rotation will see Justify race in China Horse Club silks in the Belmont Stakes. It will be the second time Justify has raced in them having worn them at his second career start. Win, lose or draw he will do us all proud in them.”

Justify debuted in WinStar silks on Feb. 18 at Santa Anita, but followed that up with a second-time out win March 11 in the China Horse Club’s silks (video). Per the rotation, starts three (Santa Anita Derby), four (Kentucky Derby) and five (Preakness) were in WinStar’s silks, making the Belmont Stakes the CHC’s turn.

“In our short history as a club we have been very fortunate to have our silks carried in some very big races and at some very big race days,” said Harrington. “But the importance of having our red-and-yellow silks worn by Mike Smith as he rides Justify in the Belmont Stakes for a tilt at the Triple Crown will undoubtedly be the most important. Its significance cannot be quantified. Not only will all of America be watching, the world will be watching. And for all the Chinese fans who are new to horse racing, seeing the colors of Chinese owners on Justify on the biggest of stages this year carries immense resonance. America has been and remains the standard of excellence in so many industries including many sports, so for Chinese to be seen by their countrymen and women as having reached the pinnacle of this sport in America by having their colors represented on such a big occasion will bring a great deal of pride. It could be the catalyst for an influx of new participants in the sport internationally. It will almost certainly have a positive impact across myriad areas of China’s fast emerging domestic thoroughbred industry.”

Elliott Walden, CEO and president of WinStar, added, “The partnership has been great and we’re excited for Mr. Teo and the China Horse Club to have the opportunity to have Justify wear their silks in the Belmont. While we would love to have him in our silks, I’m excited about the fact that he’s wearing the China Horse Club’s, too, and that they can share in the fun of the Triple Crown.”