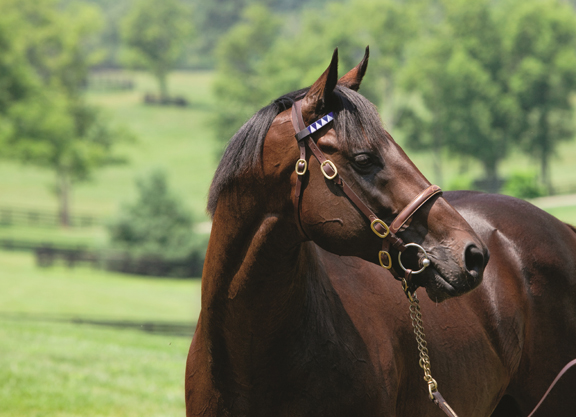 SON OF INTERRUPTED DEBUTS AT ELLIS

COMMITTED (More Than Ready), a $325,000 KEESEP purchase by Tracy Farmer, makes his career bow at Ellis Friday for Mark Casse. The dark bay is the first foal out of MSW & GSP Interrupted (Broken Vow), who is a daughter of MSW & MGSP Alternate (Seattle Slew). Interrupted, who was purchased by Jane Lyon for $575,000 in foal to Distorted Humor at the 2018 KEENOV sale, is a half-sister to GISW Higher Power (Medaglia d'Oro) and MGSW Alternation (Distorted Humor). This is also the family of Canadian Horse of the Year Peaks and Valleys (Mt. Livermore). TJCIS PPs

Bob Baffert unveils the next in a long line of pricey juveniles in HAPPIER (Street Sense), who was purchased by Susan and Charlie Chu's Baoma Corp for $800,000 at KEESEP. The bay is a half-sister to Grade III winner King Zachary (Curlin). The Hall of Famer also saddles third timer Himiko (American Pharoah), a $1-million FTKNOV buy, who was most recently second when switched from turf to dirt at Santa Anita June 21. TJCIS PPs

LNJ Foxwoods' blue-blooded homebred IVY LEAGUE (Medaglia d'Oro) heads to the post for the first time here for Hall of Famer Richard Mandella. She is the first foal out of SW & GISP With Honors (War Front), who is a half-sister to GSW Dreamologist (Tapit) and GISP stallion Fast Anna (Medaglia d'Oro). Ivy League's third dam is champion Dreaming of Anna (Rahy), who is a full-sister to MGSW Lewis Michael and a half to MGSW Justenuffhumor (Distorted Humor). TJCIS PPs